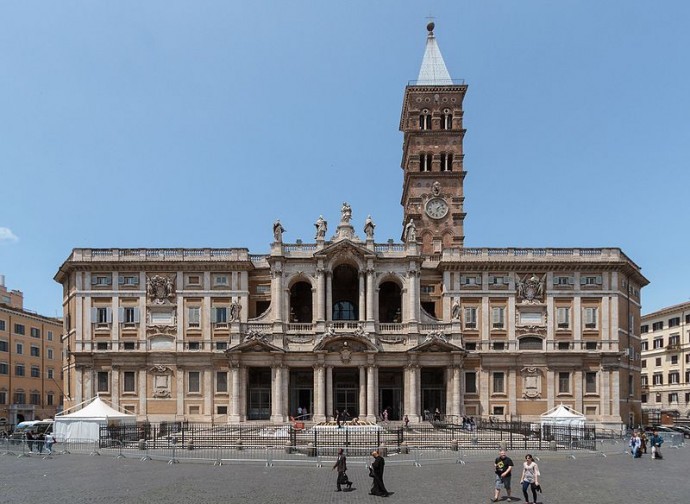 The original basilica was built in the 4th century during the pontificate of Liberius (352-366). According to an ancient tradition it was directly inspired by the Virgin. It is handed down that a Roman patrician named John and his wife, unable to have children, promised to offer their possessions for the construction of a church dedicated to Mary. On the night between 4th and 5th August, Our Lady appeared in a dream to the couple, announcing that a miracle would show them the precise place where the church was to be built. In the morning the couple hurried to Liberius, discovering that the Pope had had the same dream. They went together to the Esquiline, which was whitened by an exceptional summer snowfall: the pontiff drew on the snow the perimeter of the future basilica, whose construction was financed with the donations from John. Thus arose what was popularly called Sancta Maria ad Nives, also known as the Liberian Basilica.

The memory of this original building remains in a couple of passages of the Liber Pontificalis: the first about Pope Liberius, where it is stated: fecit basilicam nomini suo iuxta macellum Liviae (i.e. near the “slaughterhouse of Livia”), and the other about Pope Sixtus III, which recalls the work of his predecessor (Hic fecit basilicam sanctae Mariae, quae ab antiquis Liberii cognominabatur...).

Sixtus III (432-440) was elected to the papal throne one year after the Council of Ephesus, in which the dogma of the divine Maternity of Mary was solemnly defined. He had the basilica restored and enlarged, with a special dedication to the Virgin and her “new home”, in an inscription (Virgo Maria, tibi Xystus nova tecta dictavi). He also had a “grotto of the Nativity” reproduced in memory of the one in Bethlehem; in this regard, it should be remembered that the church houses some relics of the manger where Jesus was born and in particular fragments of wood from the Holy Cradle. From here derived its other name of Sancta Maria ad Praesepem.

Other popes and the devotion of the faithful have contributed over the centuries to increase and preserve the beauty of Santa Maria Maggiore. It also houses the famous icon entitled Salus populi romani (“Salvation of the Roman people”), depicting Our Lady and the Child Jesus, an icon that tradition attributes to the hand of St. Luke. Who could have brought it to Italy? A clue can be found in the Roman Pontifical: “Pope Liberius selected a venerated image that was hanging in the papal oratory. It was probably brought to Rome by Saint Helena, mother of Constantine, in the 4th century”.

On 5 August of each year, in Santa Maria Maggiore, the miracle of Our Lady of the Snow is remembered with a shower of white rose petals, dropped from inside the dome during a solemn liturgical celebration.