Could the doctrine on contraception be subject to change? For Monsignor Paglia, it needs to be considered,"the day will come when the Pope will do it". The PAV president's disconcerting interview with The Tablet refers to Civiltà Cattolica's hopes for an encyclical that would definitively surpass Humanae Vitae. It’s a concentration of pathetic responses, polls and dissent confusedly piled up and passed off as doctrine. And even the non-ideological pro-life neologism is invented. 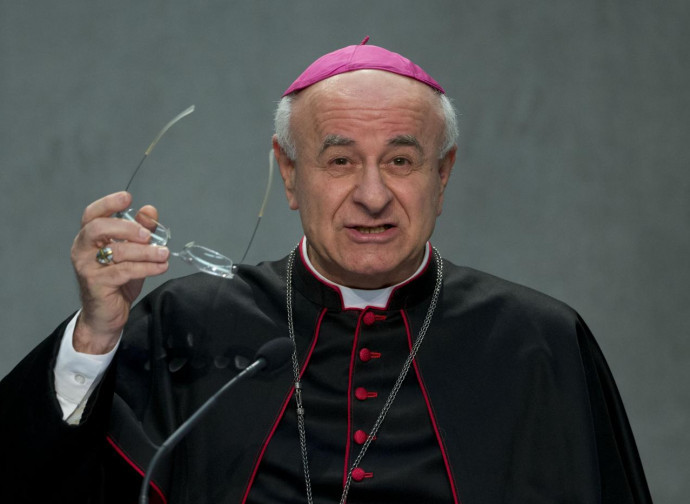 Is a papal encyclical on its way to subvert the Church's teaching on life, particularly on contraception? Last 2 July, Jorge José Ferrer, Professor of Moral Theology at the Pontifical Catholic University of Puerto Rico, introduced the idea in La Civiltà Cattolica, at the end of a long article welcoming the air of renewal introduced by the publication of the volume Ethics of Life, by the Pontifical Academy for Life (we spoke about it here, here, and here): "It is legitimate to wonder whether Pope Francis will present us with a new encyclical or apostolic exhortation on bioethics, which he could perhaps title Gaudium Vitae", since, as Ferrer had pointed out, Evangelium Vitae is twenty-five years old.

Christopher Lamb, Vaticanist for The Tablet, must have particularly liked the idea. And so he organised a tête-à-tête meeting with Mgr Vincenzo Paglia (PAV), which he reports on, rather pathetically, in an article on 10 November. To be fair, Lamb speaks of 'growing rumours' about a “new document that could soften the Church's ban on artificial contraception”. More precisely, these rumours suggest that the Pope, “who has repeatedly emphasised the primacy of formed conscience and the role of discernment in moral decision-making, could evolve the position that married couples may not resort to artificial contraception under any circumstances”.

His interlocutor, however, when asked, replied: “I believe the day will come when Pope Francis, or the next pope, will do so. But what can I say? For sure, we have to consider it”. In essence, Lamb and Paglia are preparing the field by already suggesting the line to be taken and even the title of the encyclical; it is still not clear whether they have an instigator higher up than them, perhaps robed in white. In fact, it is no mystery that Pope Francis, when faced with the openings of the PAV's Basic Text, defended the freedom of theologians to debate at 360 degrees (see here), because then the Magisterium will decide, forgetting the detail that the Magisterium, as far as contraception, artificial insemination, and the end of life are concerned, has been already decided.

Lamb's article is rather banal: apparently Paglia is the broad-minded peace-loving man who wants “to be more 'pro-life' rather than to simply reaffirm the Church's traditional opposition to abortion and contraception”. On the other hand, there are the bad guys, those who want to "drag the Church into the culture wars", like some US bishops who are trying "to prevent two distinguished Catholic politicians" from receiving Communion, or like those obstinate ones who claim that to question Humanae Vitae's teaching on contraception would be to "interfere in the Church's non-reformable teaching".

But Lamb's interlocutor is Paglia, the impassive one, not at all "upset by the turbulent debate that has seen the Academy heavily criticised by a section of the Catholic media", but determined to achieve his goal. "Look," says Mgr Paglia, "what is important today is to be truly pro-life in a non-ideological way [...].“We’re interested in demolishing – how to say – the ideological prejudices that contaminate reflection, contaminate public opinion. And they prevent broad engagement across the board”. Same old: being for life means opposing wars, dealing with world hunger, rising suicides, the death penalty, immigrants. According to Paglia, the axis must be shifted to these issues because, he reiterates, the debate “on abortion and euthanasia has become ideologised”.

The meeting between Paglia and Lamb focused on two very hot topics. The first was the appointment of Mariana Mazzucato as a member of the PAV (see here). Mgr Paglia sees no problem with this appointment, since Mazzucato, according to him, is not actually pro-abortion, but pro-choice. A good example of the power of language. Moreover, the appointment of an economist would be justified by the fact that the PAV cannot ignore “the attacks on life that come from inequality”. The question Lamb should have asked was an easy one; i.e. Wasn't there another economist who was concerned about inequality but opposed to abortion? But it is also true that Lamb was not there to get Paglia into trouble, but to open the Overton window for the clearance of contraception.

And to achieve this goal, anything goes. Starting with Paglia, who plays at pulling wool over people’s eyes and confusing the issue; first, in fact, he praises Humanae Vitae for responsible parenthood, and then warns against the risk of applying the encyclical "in a strictly legalistic manner". As, for example, do those who use "natural methods of contraception" in order not to have children; they "could be very correct in their application of natural methods"; they could say they "abide by the rule", but betray the substance. Someone explain to him that the use of infertile periods is not contraceptive and that the issue is not whether something is natural or artificial, but whether it is an act intended to prevent procreation. Coitus interruptus is not artificial, yet it is clearly contraceptive. One wonders if it is too much to ask for the resignation of a man who is head of the PAV and does not know these distinctions? Or, worse still, does he deliberately pretend not to know them?

Then he brings up respectively: the oracle of worldwide polls, which, Lamb explains, show that the overwhelming majority of Catholics do not accept that the use of contraceptives is morally wrong; Maurizio Chiodi, who pontificates about the possibility of dissent regarding the teaching of HV; Benedict XVI, who, in Lamb's agitated dreams, is purported to have said that 'artificial contraception can be used when the intention is not to prevent conception but to stop the spread of a deadly disease'. On this last fact, let us recall that the clarifying Note of the Congregation for the Doctrine of the Faith had closed the matter: Benedict XVI had in no way opened the door to contraception in certain cases, nor to prostitution, nor to the principle of the lesser evil. Lamb cannot be unaware of this, but evidently certain saboteurs of Church doctrine particularly need to pretend to have the support of Benedict XVI's authority: they hate him, but they cannot do without him.

Even St John Henry Newman is called into question: his essay on the development of doctrine has become the book most (sloppily) quoted by those who, assuming they have read it, have not understood it at all, mistaking as development what Newman actually called corruption of doctrine (see here). Strange that Lamb forgot about St Vincent de Lerins and the 'spirit' that harmonises differences.

Paglia closes the interview with a message of loving willingness to listen: “I say to those who oppose discussing these issues: I think there is a deep problem of faithfulness to the Spirit. And that is to say, that it is a pathology, it is a sick faith. And faith in the formula and not in the Spirit. I would say it runs the risk of blocking the Spirit,” no less. In any case Paglia, the peaceful man of broad views, invites the 'sick' opponents to debate, but without “falling into the temptation of being the Magisterium”. So we invite him for an interview with The Daily Compass, before Gaudium Vitae comes out. Only it won’t be Mr Lamb interviewing him this time.