The “Mazzucato case”: Vatican no longer considers faith a virtue

On his return from Bahrain Pope Francis justifies the appointment of Mariana Mazzucato to the Pontifical Academy for Life. The appointment is paradoxical because of the professor's pro-abortion statements and atheism, but for the Pope it is "a fresh breath of humanity". Yet, up to Benedict XVI, atheism was deemed detrimental to mankind and society. 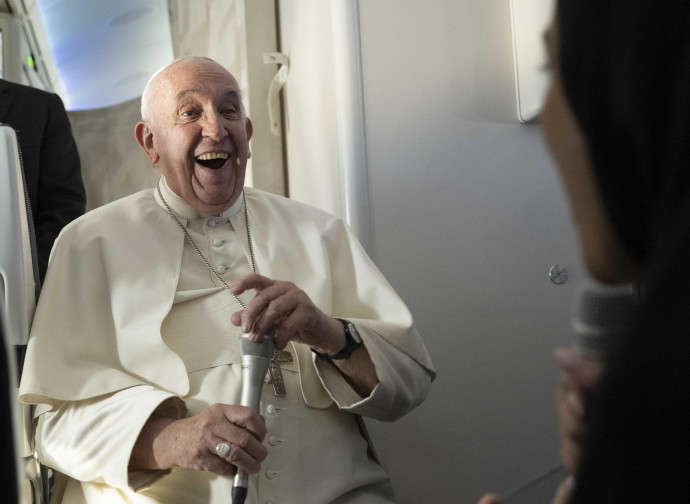 Abortionists in the Vatican: this is no small matter because it means that in the future pro-lifers will have to work ever harder 'in spite of' the Vatican. Not only without its support, but also against its positions. After all, isn't that how it is now regarding procreation and homosexuality? The situation is objectively mind-boggling and disturbing in its paradoxicality. If these are the signs of the times, surely some part of the theological doctrine of the 'signs of the times' must be revised.

An atheist and abortionist at the Pontifical Academy for Life: a paradox created by the Pope with his decision to appoint Professor Mariana Mazzucato as a member of the Pontifical Academy for Life. He was asked how this appointment was possible, given that Mazzucato is an avowed atheist and in favour of legal abortion. Francis confirmed that he himself had decided on the appointment, claiming that in this way he wanted to inject a breath of humanity into the Academy [“give a little humanity” were his words]. It is very difficult to decipher this sentence according to normal logic.

If Mazzucato represents a breath of humanity in the Academy because she is an atheist and pro-abortion, then it means that not being an atheist and being against abortion denotes a lack of humanity. Those who have been members in the past, and those who still are members without being either atheist or pro-choice, must have a poor or at least stagnant humanity in need of fresh air. But is humanity alone - assuming it is possible - capable of bringing this pure air, without referring to the true God? Benedict XVI writes in Caritas in veritate: “Without God, man does not know where to go and cannot even understand who he is”. In the Church it had always been thought that it was Jesus who brought a breath of (full) humanity because without Him humanity is not even capable of understanding what it is. Nothing personal with Mazzucato, it is not her fault, it is humanity that alone cannot bring a breath of fresh air.

The Mazzucato case is not just the Mazzucato case. If the principle applies to her nomination to the Academy for Life, why should it not apply everywhere? Two parents should be happy if their daughter married an atheist, because it would bring a breath of humanity; they should be happy if the catechist in the parish or the teacher at school were an atheist and in favour of abortion, because it would bring a breath of humanity. And why not an atheist as president of the Pontifical Academy for Life?  But logic, even the strangest logic, has its own demands for consistency.

Speaking of consistency. In 2016, Francis approved the new statute of the Pontifical Academy for Life. Article 1 says that it "has as its end the defence and promotion of human life", Article 5 consistently says that the members are part of it "solely for the fulfilment of its specific tasks" [i.e. defending and promoting life], and that they are appointed by the pope on the basis of "...faithful service in defence and promotion of the right to life of every human person". It also states that members "undertake to promote and defend the principles regarding the value of life and the dignity of the human person, interpreted in a way that conforms to the Magisterium of the Church". The same article also states that membership may be revoked “in the case of a public and deliberate action or statement manifestly contrary to these principles”. Logic and consistency would demand either that Francis amend the statute or withdraw Professor Mazzucato's appointment. Aristotelian logic, the natural logic of human thought, also applies to the Church. The reliability of the witness in all its other statements depends on it. The first principle of logic is that of non-contradiction: one cannot affirm and deny the same thing at the same time and from the same point of view. To write that the members of the Academy must defend and promote life, and then appoint a member who, due to her own declared position, does not intend to defend or promote life, is logically a contradiction.

In addition to being pro-abortion, Mazzucato says she is also an atheist. And here another problem of unprecedented gravity opens up. John Paul II in Centesimus annus says that “The denial of God deprives the person of his foundation and, as a consequence, leads to the reorganisation of the social order regardless of the dignity and responsibility of the person”. The entire social magisterium of the Church up to Benedict XVI has always denounced the damage that atheism does to society, given that without God mankind is also lost and with the waning of transcendence the proclaimed immanence also sinks. Abortion and atheism are therefore closely linked. They are not only so in Professor Mazzucato's convictions, but they are so in themselves. And now they are also so for the Academy established by John Paul II on 11 February 1994.