Communion in the hand: a Protestant attack on the priesthood

The practice of receiving communion in the hand, which was “neutral” in the Patristic age, was adopted by the Protestant reformers with a clear doctrinal connotation. According to Martin Bucer, who promoted the Anglican “reform” in the 16th century, the practice of not giving communion on the hand is owed to a Protestant rejection of two Catholic “superstitions” – the “false honor” that is claimed to be attributed to this Sacrament and the “perverse belief” that the hands of the ministers are more holy than the hands of the laity as a result of the anointing they receive in the rite of ordination. From this moment on, the act of receiving Communion on the hand has a markedly polemical significance which attacks the Real Presence and the priesthood. 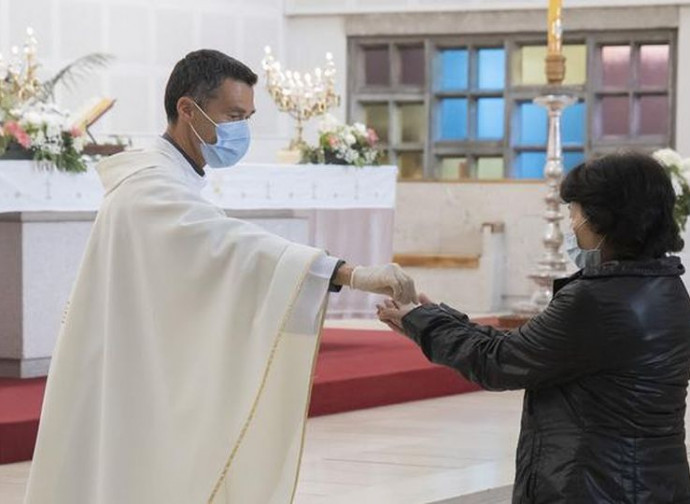 In the book on the introduction of communion in the hand of which we spoke in the preceding article, Msgr. Laise takes up the details of this historical reconstruction from the precious account of the facts that was made by Msgr. Annibale Bugnini in his book of memoirs La Riforma liturgica 1948-1975. Bugnini was not only a witness but also a protagonist of these reforms. According to the documents contained in this book, the granting of permission for Communion on the hand was above all an attempt to prevent “in these times of strong contestation […] authority being defeated trying to maintain a prohibition that would have been followed in practice only with difficulty.”  In fact, when various possible solutions were considered, it was taken into account that “a violent reaction in some areas and widespread disobedience where the practice has already been introduced” was to be expected. On the other hand, the clearly restrictive will of the legislator, which is clearly manifested in the document, were intended to ensure that the concession be interpreted and applied in such a way as to favor the spread of the practice as little as possible.

This legislation was never subsequently modified, nor was the possibility of receiving Communion on the hand ever expanded. But the requests made the Bishops’ Conferences (even though the conditions specified by the indult were not met), the insistence on reconsidering the question in places were the absence of these restrictive conditions had already been verified, the granting of the concession too easily by the pertinent Dicastery, and, above all, absolute silence on the part of authority about the irreducible disobedience which, as Msgr. Laise explains, was the sole motive for which the indult was granted in the first place – all of this contributed to the practice being extended almost universally throughout the entire Church.

A second point studied by Msgr. Laise that attracts our attention is where he demonstrates that the new practice would not truly be a “rediscovery” of an “ancient tradition,” “returning to the reception of Communion as it was done in the early Church and the Church of the Fathers” as one often hears said. Msgr. Laise expresses the conviction that the Gospel of John, the writings of the Fathers, and also the Syrian “purple codex” of Rossano (5th century) all demonstrate instead that Jesus gave Communion to the Apostles on the tongue.

In the Instruction Memoriale Domini it says clearly that, although in early Christianity Holy Communion was normally received on the hand, “With the passing of time there was a deepening understanding of the truth of the Eucharistic mystery, of its power and of the presence of Christ in it, so that there was a greater feeling of reverence towards this Sacrament and a deeper humility was felt to be demanded when receiving it. Thus the custom was established of the minister placing the particle of the Sacred Species on the tongue of the communicant.”

Thus it was that, at a certain time, one practice replaced the other, to the point that the earlier practice was not only abandoned but even explicitly prohibited. From this context it is clearly seen that, for Paul VI, this change of practice constituted a passing from an imperfect form to a more perfect form of reception.

Many centuries later, the practice of Communion on the hand, which was “neutral” in the Patristic era, was adopted by the Protestant reformers with a clear doctrinal connotation. For example, according to Martin Bucer, a promoter of the Anglican “reform,” the practice of not giving communion on the hand is a rejection of two [Catholic] “superstitions” – the “false honor” that is claimed to be attributed to this Sacrament and the “perverse belief” that the hands of the ministers are more holy than the hands of the laity as a result of the anointing they receive in the rite of ordination. From this moment on, the act of receiving Communion on the hand has a markedly polemical significance of being opposed to Communion on the tongue as the expression of an opposing doctrine in two fundamental points that distinguish Protestant belief from Catholic: the Real Presence and the priesthood. From this time on this implication cannot be ignored.

Thus, when the practice of Communion on the hand began to spread in Catholic circles in the second half of the 20th Century, it was not a mere return to an ancient custom. Thus it is no coincidence that, as Msgr. Laise demonstrates, precisely in one of the first places where Communion on the hand was abusively introduced a “New Catechism” was published shortly before this happened (the famous “Dutch Catechism”), to which the Holy See was forced to make numerous modifications (14 major ones and 45 minor ones) to correct grave doctrinal errors. In this text, commissioned by the Dutch bishops and presented through a “collective pastoral letter,” the real and substantial presence of Christ in the Eucharist was placed in doubt, an inadmissible explanation of transubstantiation was given, and any form whatsoever of the presence of Jesus Christ in the particles or broken fragments of the Host after the Consecration was denied. In addition, the teaching of the Dutch Catechism causes confusion about the difference between the common priesthood of the baptized and the hierarchical priesthood of the ordained.

The third aspect that the late Argentine prelate takes the opportunity to highlight is that, even where Communion on the hand is permitted, it is not simply an “additional option” proposed by the Church that is of equal value to the existing practice Communion on the tongue.

In fact, the attitude of the Holy See towards the way of receiving Holy Communion is not indifferent: even in those places where the Indult was received, Communion on the tongue remains the only way authorized by the law of the Church and it is clearly recommended, while Communion on the hand is only tolerated (and this as a consequence of what Laise calls the “most grave disobedience to papal authority in recent times”). Furthermore, Communion on the hand requires taking a series of precautions, especially regarding keeping one’s hands clean and being attentive to particles of the Host on the hand (requirements which are rarely taken into account in practice).