In his latest article - published in the collection “The True Europe. Identity and Mission”, with an introduction by Pope Francis - Ratzinger underlines the gravity of the legal approval of homosexual unions, which produces consequences "contrary to the common good". Laws to this effect clear the way for a concept that debases the dignity of man, reducing him to a "product", and is therefore against "the ecology of man", created in the image and likeness of God, and therefore sacrosanct. This text by the Pope Emeritus recalls the truth always taught by the Church, but forgotten in Bergoglio's recent in-flight press conference on his return from Slovakia. 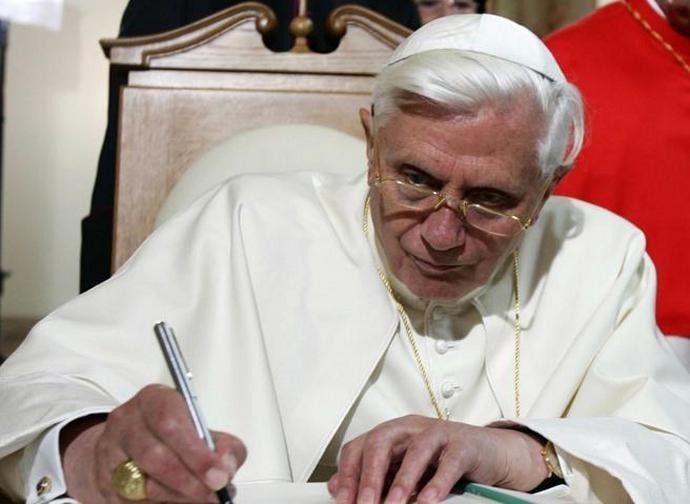 The third volume of the series Joseph-Ratzinger - Selected Texts, published by Edizioni Cantagalli, is dedicated to the reflections of the Pope Emeritus on the vocation of Europe. As with the second volume, the publication - entitled The True Europe. Identity and Mission - is enriched by a new article by Benedict XVI.

That omniscient and omnipotent "destiny" called Providence willed the hitherto unpublished text to touch on a particularly sensitive issue of the present time, namely that of the "legalisation in sixteen European States of ‘homosexual marriage’", which Benedict XVI addresses in the new article. This is an issue on which Francis had intervened awkwardly a few days ago, on 15 September, during his in-flight press conference returning from Slovakia.

The introduction to the book is written by His Holiness Francis. The new text is signed by His Holiness Benedict XVI. For those who believe that there should be only one Pope, finding two 'Holinesses' just a few lines apart is disturbing. When one then notes that the two 'Holinesses' have diametrically opposing views on the same subject, it is difficult not to feel somewhat perplexed, especially since the crux philosophorum in question is an absolutely fundamental theme of Catholic doctrine and anthropological reality.

When asked by a journalist about the laws on civil unions, Bergoglio expressed a favourable opinion, since they are "laws that seek to help the situation of many people of different sexual orientations. And this is important, but without imposing things that, by their nature, are not permitted in the Church. But if a homosexual couple wants to lead a life together, the States have the possibility of supporting them civilly". According to Francis, one of these "excellent" laws is the French one. However, he confesses that he doesn’t really know what it is. Marriage as the Church understands it is a different matter, and this cannot be changed. Therefore, Pope Francis' position is that of a clear separation between the Church's teaching on marriage and the State's legislation on civil unions. The latter is a good thing, as long as it does not require “the Church to deny its identity”. For the laicist country, this position is more than welcome: the Church can retreat to the sacristy and celebrate its heterosexual marriages, and we will take care of redefining the common good.

Bergoglio's statement clearly contradicts the Congregation for the Doctrine of the Faith's 2003 document, signed by Ratzinger and approved by John Paul II. That document, Considerations regarding proposals to give legal recognition to unions between homosexual persons, revolves entirely around the cardinal idea that "this is a matter that concerns natural moral law" and therefore the common good, and not simply an internal law of the Church. The attitude to be adopted in the face of legal recognition of such unions is clear: "One must abstain from any kind of formal cooperation in the promulgation or application of laws that are so gravely unjust, and, as far as possible, from material cooperation in their application. In this matter everyone can claim the right to conscientious objection". To cooperate formally means to approve; exactly what Francis has done.

Instead, according to the Pope emeritus, the matter of the legal approval of these unions "is not only more serious" than homosexual behaviour as a private matter, "but it acquires a much broader and deeper scope, and would end up bringing about changes in the entire social organisation that would be contrary to the common good. Civil laws are structural principles of human life within society, for good or for evil". It is precisely the common good that is the great absentee in Francis' response. And Benedict XVI, in this new contribution, once again reminds him of this. Because there is only a single truth about man, not one that is valid for the Church and another for the State.

The Pope Emeritus writes: "With the legalisation in sixteen European States of 'homosexual marriage', the theme of marriage and the family has taken on a new dimension that certainly cannot be ignored. We are witnessing a distortion of conscience that has evidently penetrated deeply into sectors of the Catholic population. We cannot respond to this with a little moralism or even with exegetical references. The problem lies deep and therefore must be addressed in fundamental terms".

Benedict XVI explains that the introduction of the contraceptive pill has in fact allowed sexuality to be separated from fertility. This break can be understood in both directions: sexuality without fertility (contraceptives), but also fertility without sexuality, which has led to "planning and producing man rationally". Man as a product, to be used, modified, destroyed; man who is no longer man. The homosexual question lies at the heart of the fundamental anthropological question: Who is man? If the answer to this question does not derive from a properly theological dimension; if man, male and female, is not created by God in His image and likeness, then he is a 'product', the outcome of his own activity, and, like any other product of human ingenuity, manipulable according to a logic of power and utility. Homosexual ideology affirms precisely this manipulability of man in his sexuality.

“When we renounce the idea of creation”, Benedict XVI concludes, "we renounce the greatness of man; we renounce his inviolability and his dignity, which is above all planning". Man is inviolable, whatever possibilities technology offers, even in the healthcare/medical field. And, given the times, it is worth repeating. Failure to recognise “the ecology of man”, as Benedict XVI calls it, “violating it or denying it leads to self-destruction”. This is precisely what we are dealing with in the case of the creation of man as male and female, which is ignored in the postulate of 'homosexual marriage'".

The legal recognition of homosexual unions clears the way for a concept of man that is against the ecology of man, erases in society the reference to a nature that man does not give himself, but which is the fruit of God's creative work. Benedict XVI reiterates, once again, that the true guarantor of human dignity is that God who wanted to remove Himself from the agora of men, without which man becomes the slave of every power that has as its rule only the limits of its own ability to impose itself. The Church has always acted as a barrier against these delusions of omnipotence, refusing to allow itself to be confined in sacristies. Benedict has stated it again, clearly. Also to Francis.