By a large majority, the Chilean population has rejected the proposed new Constitution promoted by President Boric. Despite much press coverage and considerable interference from abroad (including the UN and the USA), rejection won in the constitutional referendum. The text of the new constitution included abortion, LGBT rights, and ecologism. 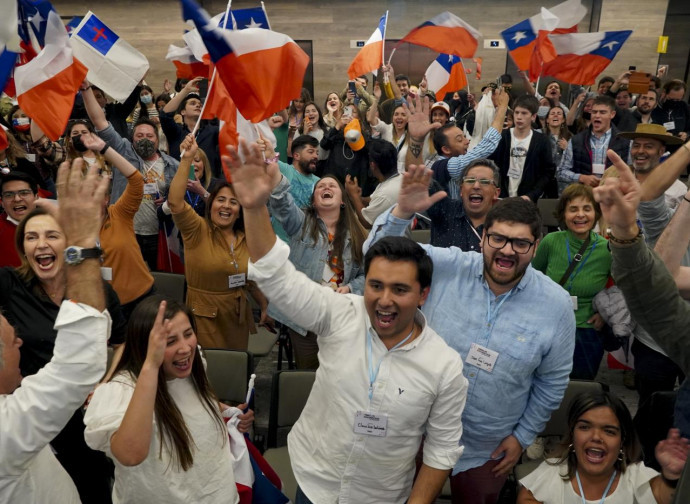 An epochal result, in defiance of the liberal and leftist sirens that from all over the world last March had first extolled the young barricadiero Gabriel Boric as President of Chile (who led the vandalism and looting in the country from 2019 to 2021), then lauded the “most progressive constitutional reform” in the world (The Guardian). The option of common sense and the voice of the Christian people, against the awful proposal presented by the Constitutional Convention, came out strongly at the ballot box: in favour of the text about 4.8 million (38.14%), against it about 7.9 million (61.86%).

An epochal result, but in defiance of the liberal and leftist sirens that from all over the world last March had first extolled the young barricadiero Gabriel Boric as President of Chile (who led the vandalism and looting in the country from 2019 to 2021), then lauded the “most progressive constitutional reform” in the world (The Guardian). The option of common sense and the voice of the Christian people, against the dreadful proposal presented by the Constitutional Convention, emerged strongly at the ballot box: in favour of the text about 4.8 million (38.14%), against almost 7.9 million (61.86%).

The 'plebiscite' vote was clear, the text, which included the right to free and unrestricted abortion, teaching in schools of all levels pro abortionist, contraceptive, and LGBTI doctrines, limits on freedom of education, freedom of religion, freedom of conscience and, needless to say, parental rights-duties, was soundly rejected. The experiment that brought Boric to power with a stratospheric majority and an extreme left-wing alliance has so far failed, despite the incredible violations of respect for the free will of the people and fierce attempts of foreign interference. It is sufficient to mention how the UN High Commissioner for Human Rights, former President Michelle Bachelet, actively participated in the election campaign to support the reasons for the 'revolutionary' text and, in the last few days, also recorded was the intervention of a group of US Democratic parliamentarians, who asked the administrators of FB, Twitter and Tik Tok to censor the supporters of the rejection of the constitutional text.

The 'rejection' front included not only all the opposition forces, but also a good part of the business world, intimidated by the government's communist drift, as well as the Christian churches, primarily the Catholic Church. Shortly before 9pm on Sunday evening, from the presidential palace, La Moneda, President Boric remarked that “the people are not satisfied with the proposed Constitution”; with great humility “I undertake to reformulate a more satisfactory constitutional process”. To put it simply, he had missed the point, the method will be changed but He has no intention of changing the direction of travel towards the country's bright social communist future. In fact, yesterday, Boric urgently convened the Government; he saw the President of the Senate and the House but, as many commentators point out, minor amendments between appointments might be possible, not a radical change of gear in the executive.

Former conservative candidate for the Chilean presidency, José Antonio Kast celebrated the victory of the 'rejection' in the Chilean constitutional plebiscite and emphasised that “this triumph of the rejection is also a tremendous failure of President Gabriel Boric and his entire government and this must be said loud and clear. President Gabriel Boric, this defeat is also yours and now you have a duty to take up your constitutional mandate and govern for all Chileans and not just for one side”, Kast said. The bishops of Chile, not at all intimidated by the investigations and convictions or the numerous abuses that many priests have suffered in recent years, had encouraged Chileans the day before the vote not to resort to violence and to respect the results of the plebiscite, but they did not hide.  "We also saw that the process we undertook did not achieve the cohesion and support that many had hoped for", as "the polarisation of political and ideological positions was very clear".

The bishops of Chile had already denounced in July how “surprising it was that the constitutional proposal recognises the rights of nature and expresses concern for animals as sentient beings, but does not recognise any dignity or right to the human being in the womb”. These concepts were reiterated by the Bishop of San Bernardo, Monsignor Juan Ignacio González, in his pastoral letter of 28 August in which he reiterated how in the new Constitution there are concepts that “are directly contrary to Christian teaching, such as the introduction of abortion or the interruption of pregnancy (Art. 61.2), dignity in dying (Art. 68), which implies the approval of euthanasia... it ignores "the essential rights of parents, such as the right to educate their children". It imposes a conception of sexuality that is contrary to the teaching of the Christian faith (Art. 40)...it disregards the right to conscientious objection, it introduces an erroneous and unique vision of man and woman, based on gender ideology, which is anti-Christian... voting for a text that directly sanctions abortion and euthanasia as a right means collaborating with moral evil and contributing to its spread".

Let us not delude ourselves, young Boric will certainly not be abandoned by the Socialist International, nor by the multinational lobbies of US abortion and LGBTI ideology, let alone by the many South American socialist and revolutionary governments.