The Consortium of Catholic media, “Catholic Fact-checking” received formal recognition last Friday from Pope Francis, who granted it an audience. It is the consecration of an unprecedented commitment to the spread of vaccines, but we can't help wondering whether this is the Church's mission. 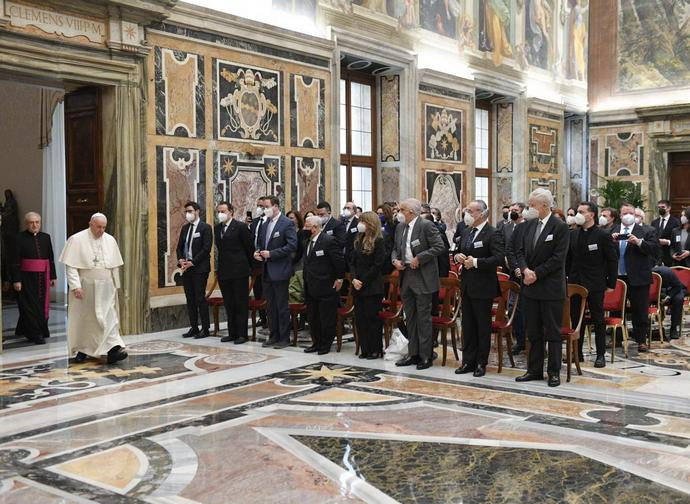 Fighting fake news, but respecting people. This is one of the messages launched yesterday by Pope Francis during the audience reserved for participants at the meeting promoted by the International Catholic Media Consortium "Catholic fact-checking". It goes without saying that fake news are all those articles that cast doubt on the salvific value of the vaccine and the mass vaccination program. Moreover, mass vaccination, in the name of the fight against inequality – the concept is repeated yet again in Pope Francis' speech – must also cover all poor countries, where Covid is anything but an emergency, while the real diseases to be fought are other.

In any case, having granted an audience and the text of the Pope's speech constitute a clear incitement to the activities and aims of this consortium, led by the multilingual website Aleteia and involving some thirty publications, some Italian, including the monthly Madre and other small entities. More than on the Pope's intervention, however, we would like to dwell on the reality it addresses, the "Catholic fact-checking Consortium", which we covered a few days ago because it has received funds from Google – specifically from the Google News Initiative – and uses as scientific support two institutes that – according to an investigation by the Church Militant website – have received money from the Soros and Bill and Melinda Gates foundations. The website Aleteia, leader of the Consortium, has reacted very harshly to this news, linking and incorrectly – on the Italian language site – La Nuova Bussola Quotidiana and Church Militant. Aleteia's denial in fact touches on a whole series of secondary aspects contained in Church Militant's article, but cannot deny the only issues that interest us and that we have taken up in the Daily Compass: the funds collected directly by Google and the partnership with institutions financed by the Soros&Gates duo.

Above all, Google's direct support is interesting and the data is reported on the Catholic Fact-checking website, even if they are careful not to specify the amount of money they have received, a subject that Aleteia also avoids tackling in its reply, while admitting that Google News Initiative has taken on "the costs of developing the Consortium". From Google's website, however, we know that Catholic Fact-checking shared a $3 million pie with ten other projects chosen by Google out of the 309 that had participated in the competition. Not exactly a pittance.

In any case, the point is this: ‘fact-checking’ has now become a form of propaganda passed off as investigative journalism, and Google is investing enormous resources, both economic and technological, to direct information according to the canons of political correctness. To expect to be able to ignore this diktat because one is on Google's payroll is naïve: at the very least, there is a commonality of purpose. Besides, it is evident that the activities of the Catholic Media Consortium are functional to Google's objectives, and go exactly in the direction Google wants, that is, to refute the arguments of anyone in the Catholic world who raises objections to mass vaccination.

It is no coincidence that we have never seen them concerned about people who are suffering serious adverse reactions to vaccines: God forbid that they should raise questions in people and discourage the goal of "all vaccinated" thus feeding the growing hatred towards "no vax". Moreover, it is also an old strategy: every time the Lords of the World pursue an objective – birth control, abortion, euthanasia, gender, homosexuality, ecologism – they inevitably finance some "Catholic" organisation in order to defeat any resistance from the Church.

Even if we don’t question their good faith, it is certainly unrealistic to claim to guarantee the scientific truth of information concerning a debate that is constantly evolving, where the certain data are few and the economic and industrial interests are enormous. Just one example: those who wrote a year ago that vaccinated people could in any case be infected and infectious were insulted and branded peddlers of fake news; today it is so obvious that it can no longer be denied. A year ago, those who predicted the limited effectiveness of vaccines and the risk of repeated inoculations were pilloried: now we are seeing the outcomes. And we could go on and on. So how can a media outlet arrogate to itself the right to confidently establish the scientific truth? Above all, is this the Church's task?

And here we get to the point that matters most to us: it is obvious that a Catholic publication must also inform and give an opinion on the pandemic, vaccines, management of the emergency and so on. But to invest such significant resources in a project that brings together the largest number of newspapers possible to carry out a one-way work of widespread information on vaccines (even with the maximum objectivity the discourse would change little), all with the blessing of the Holy See, is something that gets one thinking.

From Catholic newspapers you might expect a mobilization of this kind to defend the Church from the various dark tales that over time have been spun to discredit it and that have now entered the collective imagination, or to encourage the circulation of information on Christian communities that are persecuted in many parts of the world, or to give voice to Christians in the Middle East, where the Catholic presence is reduced to a flicker, or for some other objectives that have to do with the mission of the Church, i.e. the salvation of souls.

Instead, a network is created and mobilised to promote vaccines, even clearing the field of all moral concerns about the use of foetal cell lines resulting from procured abortions. It has to be said that this is nothing new, and it is a motif that has been returning in particular for the past two years: health first, that's the line; a wholly worldly concern that does not involve the prospect of eternal life at all. On the contrary: the Gospel, the words of faith, are a pretext to justify totally worldly objectives. And following this thread inevitably one follows the power of the world. This is nothing new, as we were saying, and yet we cannot help but feel disconcerted and disappointed.