A communiqué from the archdiocese of Bologna (Italy) denies that the mass in Budrio on 11 June was to bless a gay couple, but witnesses say otherwise. And the Daily Compass also reveals the content of the wedding invitation sent via WhatsApp by one of the 'spouses'. The diocese's document also falsifies a 1986 document by Ratzinger in order to show that it is in tune: but that document said exactly the opposite, it is in fact a clear condemnation of Cardinal Zuppi's pastoral work. 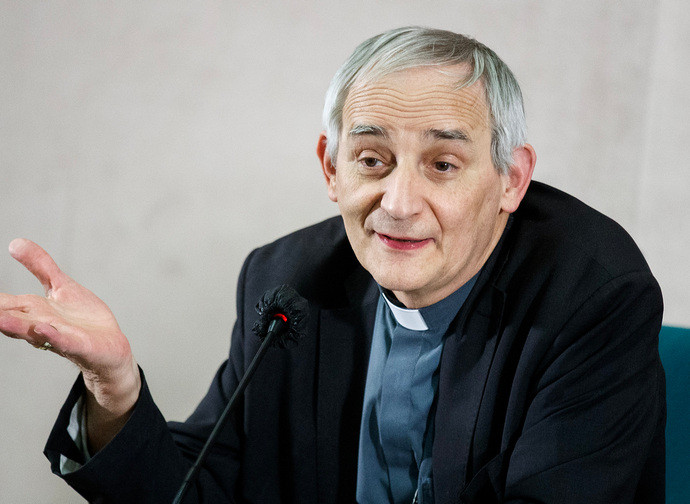 “Always deny everything, but especially deny the evidence”: the classic motto of the cheating spouse has now also become the guideline of the archdiocese of Bologna and its titular, Cardinal Matteo Zuppi. The communiqué attempting to clarify what happened last 11 June in Budrio, when a gay couple was 'blessed' during a mass, as documented by the Daily Compass, is in fact a concentrate of lies to deny the evidence and thus deflect from the cardinal’s position on same-sex unions.

The diocese's communiqué says: there was no blessing, even though a same-sex couple was present; it was "a Mass of thanksgiving for the group ‘In cammino’ [On the way], present in the diocese for thirty years, which aims to accompany and offer support in the Christian life also for people with homosexual tendencies".

Just this one sentence is packed with lies. The first, and most important, is the one that denies the fact. Pietro and Giacomo, the two of the aforementioned couple, were not there by chance, as adherents of the 'In cammino' group: the Daily Compass provided the photographic evidence and statements by the celebrants which refute the diocese of Bologna. It was an ad hoc mass for the two of them.

As further proof, we are also able to reveal the content of the WhatsApp message with which Pietro invited his friends to take part in the ceremony: “on Saturday 11 June 2022, barring unforeseen circumstances, Giacomo and I will be civilly united at Budrio Town Hall. Immediately afterwards, in the church opposite, we will celebrate a mass of thanksgiving/entrustment for our life together”.

Exactly what we had written, but let’s not be fooled by the words used by the new Pharisees to circumvent the 'law': speaking of a thanksgiving/entrustment mass is tantamount to a blessing for the couple, but it avoids formally transgressing the Responsum of the Congregation for the Doctrine of the Faith, which prohibits the blessing of same-sex unions.
In any case, it is clear that the mass in question was for Pietro and Giacomo and not, generically, for the ‘In cammino’ group.

Second lie: the purpose of the group in question is not simply "to accompany and support people with homosexual tendencies in the Christian life", as the diocese's communiqué says, but to bring the LGBT agenda to the heart of the Church, the legitimisation of any sexual orientation, the practical application of gender ideology, including the acceptance of gay unions. It’s very different. ‘In cammino’ does not take the Church's doctrine on gender and homosexuality seriously, it simply wants to change it or, rather, subvert it. Which, evidently, finds Cardinal Zuppi in agreement.

And, by the way, the communiqué speaks of a presence in the diocese for thirty years, as if to give the impression of continuity between the current archbishop and his predecessors, Cardinals Giacomo Biffi and Carlo Caffarra. But this is not the case: The parish of San Bartolomeo della Beverara has always been the reference point for ‘In cammino’, but until 2015 its presence was almost clandestine, the bishops did not like it and called the parish priest to order. Everything changed with the arrival of Cardinal Zuppi, who immediately invited the group to come out into the open and their activity became part of the diocesan ministry. Obviously always falsifying the language, presenting as welcoming the person what in reality is the imposition of an ideology.

And so does the communiqué of the Archdiocese of Bologna, quoting in a partial, erroneous and misleading way the letter to the bishops from the then Prefect of the Congregation for the Doctrine of the Faith, Cardinal Joseph Ratzinger, dated 1 October 1986. In order to justify the activity of the group 'In cammino', the communiqué quotes this passage, which is purported to be no. 16 of the Ratzinger document: "God loves every person and so does the Church, renewing her commitment against all discrimination and violence on the basis of sexual orientation", considering it "reductive to define the identity of persons solely on the basis of their 'sexual orientation'".

Actually, this quotation is taken from the final document of the Youth Synod (par. 150), which only in the second part of the sentence - the person cannot be defined by sexual orientation alone - takes up the concept expressed in no. 16 of Ratzinger's Letter on the pastoral care of homosexual persons. But in Ratzinger's letter this statement followed the denunciation of the activity of a gay lobby within the Church which, aided by external forces and enemies of the Church, aims to subvert the Church's teaching on sexuality (nos. 8 and 9); and above all it follows no. 15, in which the task of pastoral care for homosexual persons is well defined:

"This Congregation therefore encourages the Bishops to promote, in their dioceses, a pastoral care for homosexual persons in full accord with Church teaching. No authentic pastoral programme will be able to include organisations in which homosexual persons associate with each other, unless it is clearly established that homosexual activity is immoral. A truly pastoral attitude will include the need to prevent homosexual persons from the proximate occasions of sin”.

In case it was not clear, the document of the Congregation for the Doctrine of the Faith clearly condemns activities such as those of the 'In cammino' group and the pastoral approach advocated by Cardinal Zuppi, including the blessing of gay couples. We are therefore faced with outright act of charlatanism, a conscious and colossal work of mystification in order to prove that "the Church of Bologna" is "in full harmony with the Magisterium and the Doctrine of the Church". But it isn’t, and this is where Cardinal Zuppi's strategy is revealed: to promote an anthropological revolution in the Church by giving the idea of being in harmony with Tradition. A fact that comments itself.