First, the civil union at the registry office, then the blessing in church. It’s the first time a gay couple has been blessed in public in an Italian church. What’s more, it took place in Bologna which is the diocese of Cardinal Zuppi, the president of the Italian Bishops' Conference. An act which is in open violation of the Responsum of the Congregation for the Doctrine of the Faith which forbids such blessings. It’s a demonstration of the pharisaic hypocrisy of certain pastors who, instead of calling the sheep back, proudly lead them on the road to perdition. 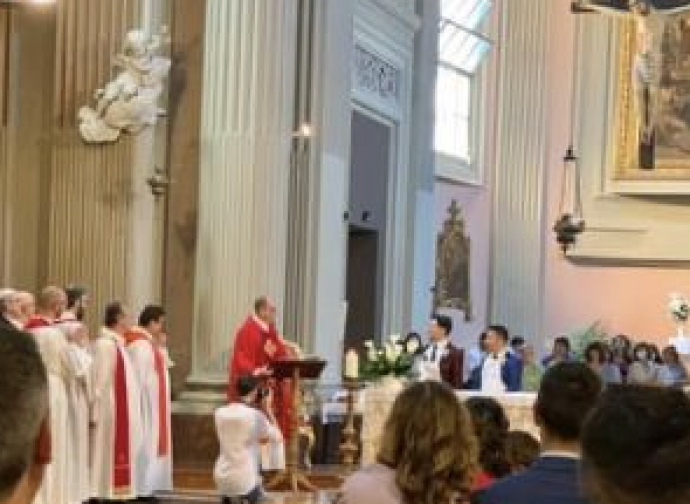 The diocese of Archbishop Matteo Maria Zuppi, one of the most prominent Italian cardinals of the moment and newly appointed president of the Italian Episcopal Conference (CEI), has staged the first public blessing of a homosexual union.

Pietro Morotti and Giacomo Spagnoli were united civilly on 11 June in the municipality of Budrio in the province of Bologna. After the classic souvenir photo and throwing of rice, the doors of the church of San Lorenzo, which is just across the square from the registry office, were opened wide for them. 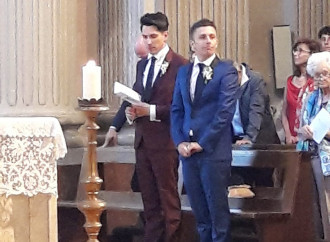 Inside the church, a large group of priests were waiting for them ready to celebrate Mass. The main celebrant, Father Gabriele Davalli, who knows the two and follows them in the group in cammino ('on the way') for so-called LGBT Catholics, among his various tasks in the diocese of Bologna, he is responsible for family pastoral care. So evidently there is no problem about taking care of the natural family as the Church promotes and supports it, as well as so-called rainbow families.

Once in the church, a second ceremony, a mass,  began for Pietro and Giacomo, their parents, relatives, and friends, after the 'yes' that had just been pronounced in front of the official audience. A Mass in which the two - declared homosexuals - were also celebrated by the Church. There was all the typical paraphernalia of weddings: the flowers, the formal suits, the songs, the photographer and the two 'newlyweds',  protagonists of the celebration, in the front row.

But, in order not to make it look like an open violation of the laws of the Church, which forbids blessings to gay couples and does so with a very clear responsum, the priests invented the idea of a Mass of thanksgiving.

How can you say it was a mass of thanksgiving for a newly sealed civil union in which two men unite as a couple? “Because every Mass is a thanksgiving”, begins Fr Davalli on the phone to the Daily Compass. So what did the two say thank you for? "If you're referring to the two young men, Giacomo and Pietro, who contracted their civil union, they participated just like all the other people who were in the church".

But, that isn’t exactly what happened that day: at one point, after Holy Communion, the two men stood on the altar where they were handed an apron by the priest. "The handing over of this apron signifies that these two are young men have always served the group in cammino with the service of coordination and reception, it was not a liturgical gesture". 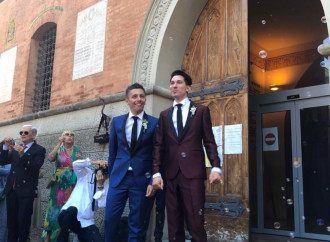 In fact, ignoring the play on words, the aim of the blessing was clear from the start. This is proved by a video from 2021 with 2400 views on YouTube, in which Pietro and Giacomo literally bare their souls, telling of their falling in love and their journey within the Church, noting among other things that “The answers in the Catechism were not exhaustive for our lives” and - paraphrasing St Peter with the pagan centurion to be baptised - after all “the Spirit already blesses this union”. The title given to the video, of high quality, is The Greatest Blessing. Which means the blessing of God, who already blesses the choices of His homosexual children who are part of a community of Catholics and whom the Church must accept.

But there is more. In the video (from minute 3:58), Giacomo Morotti puts forward beliefs that have nothing to do with Church teaching (on the contrary!), but which well express the ugly turn that many pastors, theologians, and faithful have been taking for decades. First of all, a totally misguided idea of the action of the Holy Spirit (an adjective that is never pronounced), who is believed to bless situations that the same Spirit, the inspirer of the Scriptures, explicitly condemns.

Morotti offers his own personal interpretation of the episode narrated in chapter ten of the Acts of the Apostles, when Peter baptises the first pagans in the house of the centurion Cornelius. While Peter is in the house of Cornelius and speaks to the pagans gathered there, the Holy Spirit descends upon them. Peter understands and exclaims: "Who can prevent these who have received, as we have, the Holy Spirit, from being baptised in water?" (10:47). Morotti comments as follows: "My first thought was: but these couples are already blessed by the Spirit. Not only that. The Church is blessed by the Spirit through the presence of these couples. The Spirit blesses the Church by giving the Church the presence of these couples. And so I would say: what can the blessing of men add to or take away from  the blessing of the Spirit?". Of course, the Spirit blows where it wills and in its 'freedom' - very Gnostic and not very Christian - blesses what it curses elsewhere and even blesses the Church through intrinsically disordered unions. A spirit with a dichotomous personality.

At minute 6:21, we find instead a classic example of 'adult Christianity', baptised precisely by the environment of the Bolognese left: “Because of my history, I think of the Church as my mother, just as I think of my parents. And I understand those people who feel the need and desire for explicit recognition from the Church. Because we would all like our parents to approve of our choices and always be by our side in all the choices in our lives. At the same time, however, I realise that there comes a time in every person's life when parents have to accept the choices of a son or daughter; and it is no longer the time when a child has to seek the approval of his or her parents as he or she becomes an adult”. The adult Catholic simply confronts the Church with their choices, whether she likes it or not.

And was the Archbishop of Bologna Matteo Maria Zuppi aware of all this? “Yes, I informed him myself”, Fr Davalli concluded.

So, a blessing of a newly civilly united gay couple is staged in Bologna, and the public blessing takes place in the diocese of the newly elected president of the Italian Bishops' Conference. 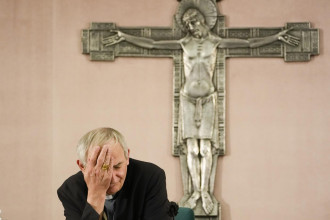 The experiment in the diocese of San Petronio attempts to circumvent Church regulations by hiding its own shameful nakedness behind the Mass of thanksgiving. Can the Church, which “cannot and does not bless sin”, the Responsum goes on to explain, instead offer God the Sacrifice of thanksgiving for sin? It is here that all the pharisaical hypocrisy of certain pastors emerges, who are then quick to accuse others of pharisaical formalism. What people do not want to see is the objective disorder of these unions and the sinful nature of homosexual acts. And the shepherd, instead of calling the sheep back, proudly leads them on the road to perdition.