Cannibalism, a taboo for most peoples and religions

Sieges, famines, and other calamities are among the most frequent causes that have historically led to cannibalism. The horror of this practice is the same in almost all religions, with a few exceptions. The Church, except in a state of necessity, condemns it. And how does one explain the fact of feeding on the Body of Christ according to the doctrine, based on the Bible, of transubstantiation? By the command of the Lord and the goal of eternal salvation. 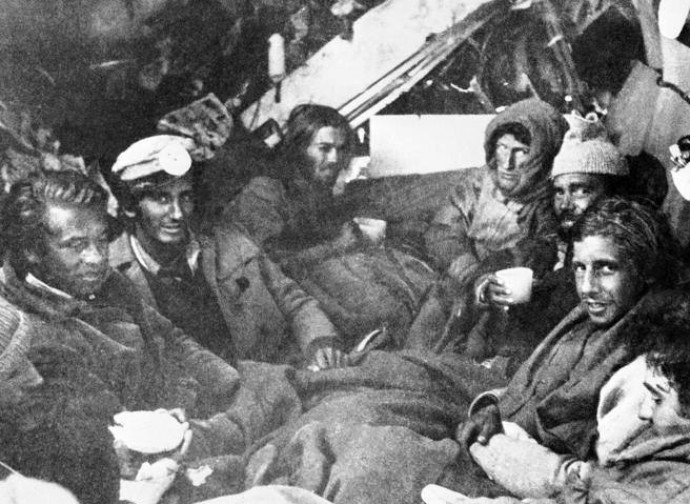 We are in 73 A.D., at the end of the first Jewish war. The city of Jerusalem, surrounded and attacked by the Roman army led by Titus Flavius, son of Vespasian, had already been totally destroyed three years earlier. The war had begun in 66, when rebellion against the power of Rome had broken out in Palestine. Only one fortress, Masada (in Hebrew Metzada), resisted. Until that afternoon in 73 A.D., when even Masada, a stronghold that seemed impregnable, fell.

In order to defeat it, Titus had used a cruel but effective strategy that was destined to succeed: he had allowed hundreds of pilgrims to enter the city for the customary visit to the Temple on the Feast of Pèsach, but then prevented them from leaving. In this way the city was overpopulated but without the means of subsistence necessary to meet the needs of all those people. And so many died, not by war, but of starvation. This is perhaps unique in the history of warfare, a battle lost not by arms but by starvation. It should be noted, however, that most of the besieged, the Zealots, committed mass suicide.

But what is interesting for us is the fact that the siege of the fortress induced to cannibalism a woman named Mary, who seeing her son weakened to the extreme by hunger, killed him and ate him. This episode makes us think of the biblical punishments which are extremely severe: God punishes his people for their disobedience, with famine, siege and death. Not even the children are spared, indeed they suffer a terrible fate: eaten by their parents! The Elohim Yahweh, whom theology defines as the true God, inflicts punishment on the Israelites because they do not listen to his word, his precepts, and offer sacrifices to other deities: “If, in spite of all this, you will not listen to me, but oppose me, I will also oppose you with fury and I will chastise you seven times over for your sins. You shall even eat the flesh of your sons and eat the flesh of your daughters” (Leviticus 26:27-29).

Incidents of cannibalism caused by sieges continued throughout the Middle Ages and we find numerous historical sources attesting to this. This is the case of the siege and subsequent sack of Rome by Alaric in 408-410, which resulted in anthropophagic meals being consumed within the besieged city.

Cannibalism can also be generated by famines, frightening periods when human beings are driven insane by hunger. Rodulfus Glaber, 11th century French monk and chronicler, recounts the famine of 1032-1033, which struck many parts of Europe, causing chaos and destruction: “As if eating human flesh was becoming a habit, a man brought cooked meat to sell at the market in Tournus, as if it were common animal flesh. Arrested, the man did not deny his guilt; he was then immobilised and burnt at the stake. The meat was buried, but another man dug it up at night and ate it, and he too was burnt”.

As we can see, the ban on eating human flesh was absolute, imposed by the Church, society and the laws. And it is not only direct consumption, but also indirect. Not long before this, Tertullian (c. 155 - c. 230) had already spoken about the prohibition of the habit of consuming arena beasts that had eaten human flesh: the danger is that of ‘indirect’ anthropophagy. For the same reason, King John II (‘the Good’) of France in 1363 forbade the slaughter of animals that had fed in the residences of barbers and surgeons, where they could have ingested blood, severed hair or nails or, respectively, human fluids and amputated flesh.

The horror that the practice of cannibalism induces is the same in almost all religions, with a few exceptions. But it is not our intention to dwell on this practice from a ritual point of view or as a mental illness. We are interested in the cannibalism that results from unusual conditions, produced by sieges and famines. These are extreme conditions, which can produce extreme reactions.

Are these actions forgivable? In some cases, although the Church condemns (and forbids) the practice, there have been mass absolutions in populations that had suffered prolonged sieges, which created the conditions for an aberration such as cannibalism.

In more recent times, we have several examples of cannibalism arising from extreme conditions: the great famine in Russia in 1921 or the 1972 plane crash in the Andes where members of a rugby team ate their dead comrades in order to survive. Of course, it is a reprehensible act, condemned by the Church, even though it considers it morally permissible to eat human flesh in dire necessity. Perhaps the only fundamental taboo shared by most peoples and religions in the world is the prohibition of eating human flesh.

So how do we explain eating the body of Christ and drinking His blood during Mass? Jesus said to them, “Truly, truly, I say to you, unless you eat the flesh of the Son of Man, and drink his blood, you will not have life in you” (Jn 6:53). We explain this by transubstantiation and the purpose of eternal salvation. According to the Compendium of the Catechism of the Catholic Church, consecration brings about the conversion of the whole substance of the bread into the substance of the Body of Christ, and of the whole substance of the wine into the substance of His Blood. This conversion takes place in the Eucharistic prayer, through the efficacy of Christ’s word and the action of the Holy Spirit. However, the perceptible characteristics of the bread and wine, i.e. the ‘Eucharistic species’, remain unchanged.

The first to use the term transubstantiation was Rolando Bandinelli, the future Pope Alexander III. It was later taken up by Thomas Aquinas - in particular in De venerabili sacramento altaris - and by Scholasticism, which precisely delineated its meaning.

The Catholic view of the Holy Eucharist and also its biblical support is insurmountable and undeniable. Deo gratias.

* For obvious reasons, no recipe will illustrate this article.