Attacks in Chile “a blow to the hearts of Catholics”

"The burned down churches are a blow to the hearts of Catholics: protestors draw blasphemous graffiti and incite violence" the Archbishop of Santiago de Chile spoke to the Daily Compass following the Sunday fires. "It would be foolish to deny that the inspiration for these attacks on the Church and religion are the errors of our Church and the sins we have committed and are ashamed of." 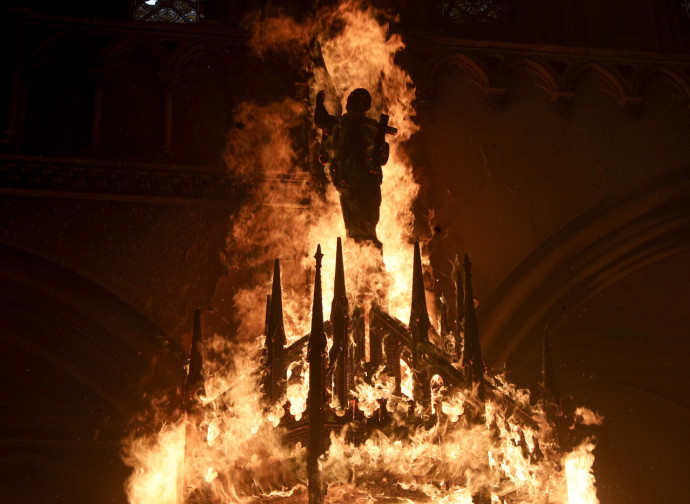 "Violence is evil and he who sows violence reaps destruction, pain and death. We must never excuse violence," said the Archbishop of Santiago de Chile, Celestino Aós Braco, at the beginning of his statement of condemnation of the violent attacks on the Chilean Church last Sunday. The archbishop then went on to say: "A year ago we suffered a social explosion. This led to so much personal pain and material destruction. We thought it would be a bitter and hard lesson. It forced us to rebuild our institutions and has brought more sacrifices and ongoing hardship to the poorest among us; [since then] life has become more difficult for them...”

The first church to be arsoned was San Francisco de Borja, which is used regularly by the carabineros police force. It was looted and some of its religious objects were set ablaze in the streets. Hours later, violence came upon the Church of the Assumption. Its dome, consumed by flames, later collapsed. The Church of the Assumption was one of the oldest buildings in the capital (built in 1876). Both churches are located near the now famous "Plaza Italia" where several stores and even a supermarket were ransacked. In addition, some police precincts on the outskirts of the capital were attacked, including Puente Alto, wounding 18 officers.

These events were caused by groups of rioters who participated in an event to commemorate the first anniversary of the so-called "social explosion" in Chile. Protestors celebrated with looting and violence what began one year ago as a destructive path in Latin America’s most prosperous country, but now a nation of great uncertainty. In the wake of violence, thirty persons have lost their lives while thousands more have been injured. On October 25, Chileans will decide by referendum whether or not they want to amend their nation’s Constitution. "The poor are the ones who are most affected. We were hoping those actions and scenes would not be repeated. [But ] we are still suffering today such violent action and images. We grieve the destruction of our churches and other public property; above all, we are sorry for the pain felt by so many Chileans of peace and generosity. These images are not only shocking and painful in Chile, but shocking and harmful to people from other countries around the world, especially to our fellow Christian brothers and sisters," said Aós Braco, officially installed as archbishop since December 27, 2019.

With these new attacks, more than 60 churches (Catholic and Evangelical) have incurred serious damage. The papal foundation Aid to the Church in Need (ACN) has categorized the attacks as "hate crimes." Considering the problems the Chilean Church has had to face in its recent past, the question is inevitable: Is all this violence justifiable? "It’s impossible to justify the unjustifiable," stressed the 74-year-old prelate in his statement.

What follows is an exclusive interview the Daily Compass conducted with Archbishop Celestino Aós Braco.

Your Excellency, what is your assessment of the Church in Chile?
There are various problems. There are problems within the Church, within the structure of the Christian and Catholic communities. And then there are the social problems, the problems of our country. We will always have problems related to the Church, because the Lord gave us the mission to proclaim the Gospel to one and all, and this is a massive undertaking in Chile, not only in terms of personal evangelization but also in terms of bringing the Gospel message to our institutions. We Christians don’t live in a fishbowl. We live in this country and, no doubt, we are affected by both all our problems and all our joys. In this sense, we are faced with huge challenges that must be met by means of the Gospel.

How is the Church reacting to the protests in Chile?
The truth is that this reality can be explained on two levels. There are a series of claims that are legitimate: Who doesn’t want a better distribution of goods? Who doesn’t want health care to be accessible to all? Who doesn’t want better education? These are entirely legitimate demands, but they have been overshadowed by violence. When faced with violence, we stand up against it. This is not the way, not the solution. So how do we live? We live with pain. Every day we have to encourage those brothers or sisters who say they are happy and that everything is fine. No it isn’t! There are many forms of injustice and we must get involved. We cannot just remain on the side lines. The passivity of some causes harm, but so too does violence. And we might say, what’s the use? What are we going with all this? We are convinced that violence is evil and that violence only leads to more violence. It is not the solution. As the violence has directly affected the Church, what is your reading on the attacks?
We have many burned down churches, but there were already some indications [that this would happen]. I come from the Diocese of Copiapó when they torched the image of Our Lady of Candelaria, the patron saint of the miners and the people of Atacama. It was a painful blow, one directed at local Catholics, since this is a traditional mining region. On another occasion, they blasphemed an image of Christ inside the sanctuary, but these were both very isolated incidents. What really hurts us? Indeed, some churches, in particular, were of inestimable value, but what hurts us most is religious persecution. They paint offensive graffiti, which is sometimes sacrilegious and incites violence. But this is aimed not just at priests and bishops, but at believers as well. Obviously even insults, acts aggression, and angry invectives are all intolerable. In Chile, we have laws for peaceful coexistence. There are laws prohibiting discrimination based on sexual orientation, ethnicity, and religious belief. These are not just written words, but must be lived…

And couldn't these attacks be interpreted as a response to the scandals involving members of the Chilean clergy? Could they be an expression of anger?
No doubt. Throughout the history of the Church, we have seen many errors and many sins. Mistakes can be involuntary and without responsibility, while, in reality, we always bear responsibility for our sins. The sins that have been committed, whether due to a misuse of money, an abuse of power, or disordered sexual abuse, certainly are the source of such wounds. We suffer so greatly together with the victims! This has caused tremendous anger in our society. I have no doubt about this. It would be foolish to deny that the Church’s own mistakes are an underlying cause of the acts of aggression against the Church and religion. There are sins that we, too, have committed. We are ashamed of them and we, and we have already begged forgiveness.

In these circumstances, what are your challenges?
The truth is I do not know if my challenges are any different from those of the Gospel. I am a humble servant of St. Francis of Assisi, a humble Capuchin friar, whose rule is the life of the Gospel of our Lord Jesus Christ. This is the challenge and objective for all Christians.

I would like every man and every woman in Chile, especially in this diocese, to have an encounter with Jesus Christ, because I am sure that Jesus will bring them grace, salvation, and happiness. It is not a question of continuing to maintain Christianity or religion as if it were an ideology, as an aspect of our morality or some beautiful theory. Jesus Christ is a real person and He was born to Our Lady, the Virgin Mary. Jesus lived, was crucified and rose again. Christ, for us, is the Good News, the news of our dignity, the dignity of the human person we understand when looking at His Cross.