Africa spared by COVID-19, but floored by locusts

So far only one recorded case of Chinese flu in the Black Continent. But the locust invasions in many countries are cause for serious concern. The locusts are destroying the crops and the people are responding by eating the locusts. But it's a mistake because they're contaminated with pesticides. 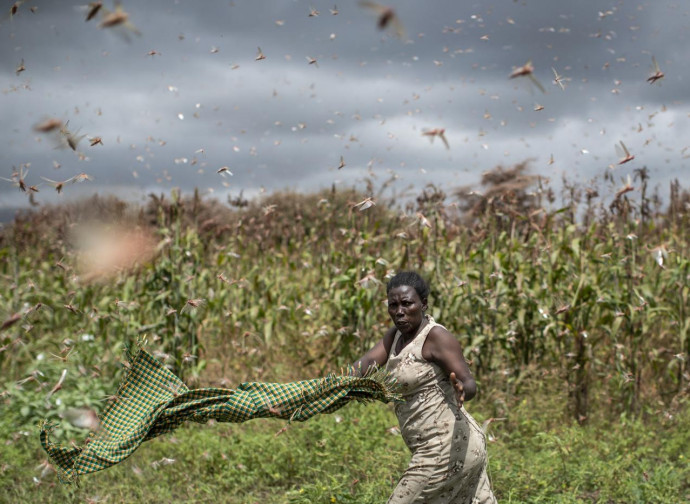 Africa for the time being has escaped COVID-19, according to data provided by OMS. So far only two cases have been recorded, in Egypt on February 14, and in Algeria ob February 25. The absence of cases seems very improbable, but hopefully it is true. Especially since, according to a study published on 20 February by The Lancet magazine, three of the ten states most exposed to the spread of the virus – Kenya, Ethiopia and Tanzania – are struggling with a humanitarian emergency. They are facing a looming threat of famine due to huge swarms of locusts that last autumn invaded East Africa, already drained by a long period of drought.

Since autumn 2019, locusts have reached Somalia, Djibouti, Eritrea, Kenya and Ethiopia, causing severe damage to crops and pastures. Fear that they would multiply and invade neighbouring states due to insufficient locust control measures by the governments of the countries already affected, was confirmed in February. Around the 10th of the month, swarms were sighted in Uganda, Tanzania and South Sudan.

Kenya, for example, for weeks not only failed to take action, but tried to conceal the problem. According to the authorities, people were mistaking harmless grasshoppers for locusts. Agriculture Minister Mwangi Kiunjuri drew criticism and ridicule when he suggested the people photograph the “alleged” locusts and publish the photos on social media, after which thousands of citizens mocked him by posting images of real and mythological animals to the media. Meanwhile, the swarms had invaded first the eastern and then the central areas of the country. Finally the government organised aerial pest control operations, but it was too late.

In Somalia, while waiting for help – the government had been promising insecticides and resources since December, which for the most part were never delivered – people try to scare the swarms away by banging on pots and pans, those who own a rifle by shooting in the air. It occurred to someone to “fight” the insects by eating them.

The local media have published photos of pasta and rice dishes seasoned with fried locusts. Restaurants have been urged to include them on their menus. Rumour has spread that they have therapeutic properties in particular to combat back pain and high blood pressure. Dr Muo Kasina, president of the Entomological Society of Kenya, encouraged the consumption of locusts, saying that they are not only edible, but rich in valuable proteins. So when the swarms reached Uganda, completely unprepared for the emergency, with no means of attacking them except by distributing cans of insecticides, people began to collect the dead insects and cook them. In the meantime, however, the government has deployed the army and rented aircraft equipped for pest control.

Agriculture Minister Aggrey Bagiire hastened to warn the population that locusts killed by insecticides are poisonous and eating them can have fatal consequences. But there would still be a health risk. A conscientious health officer, Dr Michael Kaziro, sounded the alarm: “Grasslands are being contaminated at various levels. Even if the animals do not die from them, pesticides will be in the meat and milk we consume. Everyone cares about the crops, but this region is 90% pastoral and we would need targeted insecticides”.

According to FAO, locusts are the most dangerous insects. Each adult insect eats the equivalent of its own weight every day. To give an idea of their destructive potential, in one day a swarm the size of Paris devours the equivalent of the food eaten by half the French population. Again according to FAO, without effective interventions by June the number of insects, which are already tens of billions, could increase by 500 times. As usual, the only hope is the intervention of the international community. FAO has asked for an extraordinary contribution of 76 million dollars to provide the infested African countries with insecticides. On 18 February the United States pledged eight million dollars.

A locust can travel 150 kilometres in a day. Experts believe that it all started with a swarm that formed in the Arabian Peninsula and migrated to Yemen where, given the country’s disastrous situation, no one bothered to intervene. There the insects multiplied, then crossed the Gulf of Aden and invaded the Horn of Africa. The fear that the phenomenon would become a global emergency proved to be well-founded when on 31 January Pakistan revealed the presence of huge swarms in three of the four provinces into which the country is divided and declared a state of national emergency. However, the first sightings date back to May 2019. In Pakistan, too, the danger was underestimated. In November the Minister of Agriculture of Sindh, Ismail Rahu, advised the population to eat locusts. “The insects have come this far, so the inhabitants should eat them,” he said in a video inviting people not to worry because “they are not harmful”. The Minister of National Food Security, Makhdoom Khusro Bakhtiar, on the other hand, said that the invasion was due to climate change.

One country that evidently takes the danger seriously is India, where the last invasion dates back to 1993: it is buying drones and special equipment to monitor the movements of locusts on the border with Pakistan, and large stocks of insecticides. If swarms are reported, intervention is timely and includes the destruction of the laid eggs. The government has allocated 4.3 million dollars to compensate the affected farmers. China is also on alert. In June, with the start of the monsoon season, it will be clear whether the locust control measures taken by Pakistan and India will have been sufficient to prevent an invasion. The Himalayan chain, on the south-west border with Pakistan, is a natural barrier, but locusts could also come from Bangladesh and Myanmar.

For the moment it appears that the government is bringing an “army” of 100,000 ducks to the Pakistani border. The CGTN television channel has released a video showing thousands of marching “troops”. The Chinese media praise the initiative. Birds, they say, can be more effective than pesticides. In 2002, 4,000 were released in the areas affected by an invasion, but the outcome is unknown.