A universal basic wage for everyone? Good intentions are not enough

There are definite limits to a universal basic wage as proposed by Pope Francis for members of the World Meeting of Popular Movements. It would be absurd to seek an increase in public welfare to citizens when national GDPs are suffering and in freefall. When fewer payrolls and invoices are issued, equally fewer taxes are deposited into national treasuries that go to support the various types of "social security." The solution once again falls to markets, provided they’re not blocked not just by viruses, but neither by corruption, crime, high taxation and every strain of political-economic contagion. 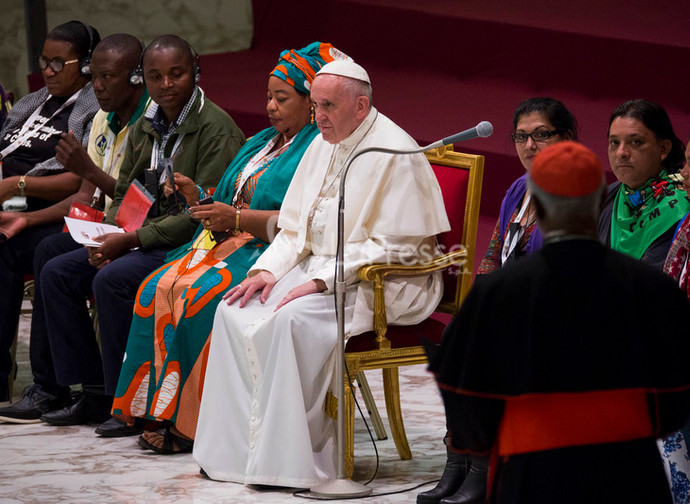 A hotly debated letter from Pope Francis to members of the so-called “popular movements” was released on Easter Sunday. The pope’s letter expresses the affection and solidarity he has for his "dear friends" of the World Meeting of Popular Movements (WMPM) who had already met with him three times, yet this year – for obvious reasons – have not enjoyed their annual papal audience.

The WMPM members are the "social poets" often criticized for their "new left“ projects. However, the controversy does not lie in identifying Francis’s interlocutors, but rather in the content of his message. We find it in an economic proposal with two words in the original Spanish: salario universal, a sort of universal basic wage the pope seeks for workers “without steady income:”

“You who are informal, working on your own or in the grassroots economy, you have no steady income to get you through this hard time ... and the lockdowns are becoming unbearable. This may be the time to consider a universal basic wage [income] which would acknowledge and dignify the noble, essential tasks you carry out. It would ensure and concretely achieve the ideal, at once so human and so Christian, of no worker without rights.”

No doubt, the pope is most concerned for those who don’t have regular-paying employment, as is the case for many WMMP social workers during the worldwide economic shutdown. Those who already had miniscule incomes prior to the pandemic are now hit the hardest by the crisis, earning next to nothing.

As economics scholar Nicola Iannello said, “The pope addresses those who work in the ‘informal economy’ and who at this terrible time are suffering particularly from the economic effects of the pandemic-induced crisis." But then Iannello elaborated on his statement: “If the pope has in mind a temporary and emergency measure, the economy can bear this burden. [Yet] if we are speaking about a permanent and unconditional wage, such a measure should be avoided, and all the more so at this time of intense global crisis."

What reasons do we have to doubt the validity of what social economists define as “universal basic income (UBI)”? In economic terms, the most immediate answer is found in common sense: when there is no income, pay outs are impossible. It is a basic "in-out" economic theory that relies on the simplest mathematical disciplines and truths. So when there is almost zero economic input, the output suffers in perfect proportion. 0 + 0 = 0. It applies to both private companies and public coffers. Note even the pope has the power to change these laws.

It would be absurd to propose an increase or a new type of public welfare to citizens when national GDPs are suffering dramatically, even experiencing perilous freefalls. In a matter of a few weeks the GDP of many countries have been halved and right at the beginning of the second spring quarter when traditionally many weak businesses are re-launched following a difficult winter. It is true that some wages continue to be paid, especially the state’s bullet-proof paychecks for its civil servants. Yet, certainly this is not true for everyone and definitely not so for self-employed contractors and freelancers who are unable provide their valuable services at this challenging time. So it's simply a question of logic: if there are fewer payrolls and invoices issued, equally fewer taxes are deposited in national treasuries that go to support the various types of "social security."

However, there is also a less immediate and more complicated reason why universal income is not possible. Let's start with the "in" of income. As Professor Iannello said, if a UBI is a "temporary measure", that is with payments issued for a few short weeks, national treasuries probably could probably afford them even while undergoing severe economic stress. However, for not much longer than this.

Let's illustrate this with a real example and some calculations to highlight the problem in more detail. Take Italy, which already has a sort of UBI in force: its “redditto di cittadinanza” (citizenship wage) activated over a year ago in March of 2019. The citizenship wage is a needs-based benefit ranging from a minimum €780 to maximum of €1330. However, to implement this economic measure, the Italian government wrestled several months to pass legislation which, in turn, came loaded with numerous bureaucratic obstacles to approve candidates for the state benefit. The hoops to jump through were so many and complex that it seemed Rome intentionally wanted to stall cutting checks to potentially qualified citizens. Why? Precisely because of the scarcity of funds in Italy’s national treasury: it cannot promise to give what it does not have.

According to the Italian National Institute of Statistics (ISTAT), in 2019 there were 2,400,000 Italian pre-qualified candidates for citizenship wages based on declared levels of income. This was not entirely inclusive of the 9.8% of the population currently unemployed (nearly 10,000,000 out of 60,000,000) who to their dismay probably will be excluded from receiving the benefit (for other reasons shown below).

Scrolling through the Economia Italia website  which explains the rubrics for accessing citizenship wages, we note that the government set up more than a few stumbling blocks with its many "if’s" and "but’s" to weed out applicants. For example, all low-income "single" families qualify, "but" not those:
- with a gross annual income greater than € 9,360;
- with real estate assets of over € 30,000;
- with liquid assets (checking and savings accounts, credit cards, and other financial instruments) in excess of € 6,000.

Added to this are a few “only if’s”. Recipients who meet all the above prerequisites can receive the state benefit, yet only if they:
- are available to volunteer 8 hours per week for their city or town;
- attend training courses organized by Italy’s Department of Social Security (INPS).

With just one lie regarding any of the above, according to the web site, candidates risk incarceration: as if the last "if" were like a sheriff’s gun pointed at their heads. “If false declarations have been made in applying for the citizenship wage, applicants will face 2-6 years of prison time."

So if it is already quite impossible to implement a universal basic income for all unstable low-income workers in Italy, the world’s eighth largest economy and where the pope's words are most felt, what sense does it make to daydream about such remuneration for countries whose economies are even more currently devastated than Italy’s?

Even with all the best intentions and sentiments to care for our most economically vulnerable fellow citizens, those whom the pope says are "hoping to catch some crumbs that fall from the table of economic power", such concerns and feelings merely fill hearts with Christian solidarity and compassion but not public coffers. Instead, it is the very same markets which the pope decries as not able to  "reach the peripheries" that can offer basic income to workers when not blocked not just by viruses, but by corruption, crime, high taxation and every strain of political-economic contagion.