Wine in the abbey: for God and hospitality

Wine is the Christian drink par excellence, necessary for the liturgy, but also for hospitality, which explains why monks played such an important role in the expansion and improvement of viticulture, especially after the great barbarian invasions that ruined the immense Roman vineyard: Champagne, Cirò, Greco di Tufo, Riesling, Bardolino, Valpolicella and Lacrima Christi. The monks also have the merit of improving cultivation techniques and introducing the standalone row.
- THE RECIPE: PHEASANT IN RED WINE 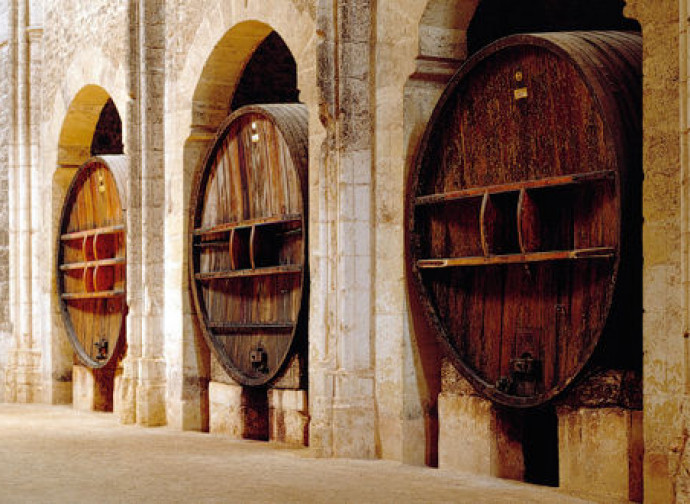 Today, all over the world, numerous monasteries maintain an agricultural activity focused on the production of honey, cheese, beer, spirits and liqueurs, but also wine.

There are numerous orders to which the names of many wines, including Italian ones, are linked. The Benedictines contributed to the success of Cirò, Greco di Tufo and Greco di Gerace, Ragnano, Freisa, Monsonico and Santa Maddalena; the Cistercians are responsible for Gattinara and Spanna and above all Riesling in Germany, which has been cultivated on a large scale and spread since the 15th century by the Cistercian monks of the monastery of Eberbach; the Knights of Malta created Bardolino, Soave, Valpolicella and the wines of the Trasimeno Hills; the Jesuits provided us with Lacrima Christi and the Templars with Locorotondo; to the Discalced Monks we owe the wine of the Euganean Hills, etc.

The monks, with their knowledge of Latin, have also provided for the transmission of the agricultural texts of the Romans, thus resuming and improving the techniques of vine cultivation that the ancients had developed. The vines cultivated by the monks over the centuries have allowed the creation of first-rate wines.

Since wine is the Christian drink par excellence, necessary for the liturgy, but also for hospitality, it is clear why the monks played such an important role in the expansion and improvement of viticulture, especially after the great barbarian invasions that ruined the immense Roman vineyard.

Other innovations are also owed to the monks: first of all Champagne, created by a monk, Dom Pérignon. Then the improvement of the press, the enhancement of the best vintages and territories, the construction of small walls, which were used to remove stones from the ground, protect the vines from the assault of cattle, prevent the theft of grapes and capture the heat of the sun: this is how the clos [walled vineyard] was born. And above all they banned the complantage, which was the method of planting vines alternating them with fruit trees. This impoverished the soil, while the trees shaded the vines. Instead by planting only rows of vines, the monks were able to select the best vines, improve vinification and determine the best locations. More than one hundred French denominations are of monastic origin. The monks travelled a lot and exchanged techniques by oral transmission, hence a relative lack of information on the subject.

Medieval France had more than a thousand monasteries including 250 Cistercian abbeys and over 400 Benedictine abbeys. But the great French wine-producing tradition originated in Roman times. Generally created by the Roman legions in the 1st century, the Gallic vineyard benefited from extreme care and refinement of production. Nowadays in France there are seven monasteries that own vineyards, but only three of them produce wine independently.

The most visited abbey is Cistercian: Notre-Dame-de-Lérins on the island of Saint-Honorat, opposite Cannes. They produce several cuvées among which the Saint-Sauveur, consisting of an opulent Syrah, stands out. The Benedictine abbey of Sainte-Madeleine-du-Barroux produces several interesting and inexpensive cuvées of Ventoux wines.

At the foot of the Cévennes, near Uzès, the Greek Orthodox monastery of Solan is home to a community of wine-growing nuns who practice biodynamic viticulture and produce splendid dark wines, better every year: their cuvée Saint-Porphyre, based on Cabernet Franc grown on marl, is remarkable.

Other communities have entrusted their vineyards to nearby winegrowers. There are also companies that have preserved cultivations once taken care of by monastic orders.

Not only in Europe, but also in the United States several monasteries produce excellent wines. We mention only The Winery at Holy Cross Abbey in Colorado, which produces Viognier, Merlot, Chardonnay, Sauvignon and Riesling, with evocative names: Divinity, Revelation, Astrologist, Theurgist, Alchemist. The wines of this abbey have won more than 100 awards for their excellent quality.

Last but not least, Italy is no less impressive, on the contrary.

In Vitorchiano, in the Viterbo area, in a Trappist convent, the cloistered nuns produce an excellent natural wine, under two labels: Cœnobium and Cœnobium ruscum. There are 75 sisters, who perhaps never imagined that they would also become winemakers in the convent. But they follow the Rule of St Benedict, written in the 5th century and renewed by St Bernard of Clairvaux in the 12th century, which orders the monks to pray, practice the lectio divina and work with their hands.

We move to Venice, where the Discalced Carmelites produce wine from the 700 vines planted in the “Mystical Garden”, a corner of paradise where the monks have been growing medicinal herbs and producing the wine used in the convent since time immemorial. Here 21 varieties of ancient vines from Venice have found new life, implanted after the genetic mapping carried out in 2013 thanks to the collaboration between the Consorzio Vini Venezia and the Universities of Padua and Milan.

The result was two table wines: a white (the product of 23 varieties, including Glera, Dorona, Pinot, Malvasia, Tai and Terra Promessa - a variety that a monk brought from Mount Carmel between the two Wars); and a red resulting from 17 varieties, including Raboso, Cabernet and Pinot grapes.

Remaining in the Veneto, we find Il Convento dell’Immacolata di S. Pietro di Barbozza, which stands on a hill in the heart of the historic “Prosecco Road” that leads from Conegliano to Valdobbiadene, in the province of Treviso. Here Pucinum, a grape variety that has its origins in the 2nd century B.C., is cultivated. Produced in single-variety winemaking or with a minimum contribution of Verdiso or other local grapes, it gives life to a dry wine that is mosso [sparkling] with a distinctly fruity aroma and a full-bodied flavour, characterised by a slightly bitter streak. From the most prized grapes of the Convent come the DOCG Prosecco Superiore di Valdobbiadene Millesimato Extra Dry, the Millesimato Brut Colle del Santo and the DOC Prosecco Treviso Millesimato Extra Dry Colle dell'Eremo.

In Emilia-Romagna we find the Abbey of San Pietro di Modena, where the Benedictine Fathers have lived in community since the 12th century and produce, in addition to the traditional balsamic vinegar of Modena DOP and Parmigiano Reggiano DOP, also an excellent Lambrusco Grasparossa di Castelvetro DOC.

In Asciano, in the province of Siena, the Abbey of Monte Oliveto Maggiore has a farm that produces oil, honey, truffles, beer, spirits and of course wine: Grance Senesi DOC and IGT Toscana Rosso, Rosso Novello, Rosato, Passito and Vermentino. The extraordinary wine cellar was built in 1300.

And the ancient Benedictine Abbey of San Gaudenzio, in the Monferrato area, (which no longer exists today and the name has been adopted by an excellent winery) gives us the recipe that you find as a corollary of this article (pheasant in red wine), taken from its 15th century recipe book.