After Roxana Bruno sounded the alarm about Covid vaccines and the risk they pose to fertility, another warning comes from Janci Chunn Lindsay who has worked on the development of contraceptive vaccines: due to the similarity between syncytins and the SARS-CoV-2 spike protein, vaccine-induced antibody responses could trigger a cross-reaction, causing reproductive side effects. Even the Virologist Bill Gallaher confirms the suspicion. He points out that there are already numerous cases of spontaneous abortions and menstrual irregularities in vaccinated women. 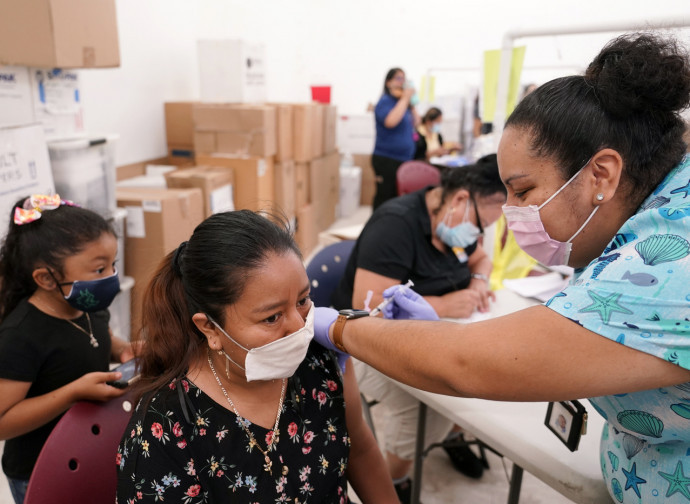 For some time now, the possible consequences of vaccines for Covid-19 on fertility have been subject of debate. The immunologist Roxana Bruno, an Argentine scientist, highlighted the risk in her studies that certain anti Covid vaccines, which use the protein spikes of the SARS-CoV-2 virus as an antigen to activate the immune response, can cause infertility. This is because COVID-19 vaccines have a high genetic and protein similarity to two human proteins, Syncithin-1 and Syncithin-2.
Yet, the hypothesis of the Argentine scientist was not taken into consideration by mainstream thought, which as to be expected dismissed her as a conspiracy theorist.

The subject, however, was raised again in a recent April 23, meeting of the Advisory Committee on Immunization Practices of the CDC (the US Center for Infectious Disease Control, a governmental body) held in Atlanta. The focus of this meeting was blood clotting disorders following Covid vaccines.

Dr Janci Chunn Lindsay, who heads the Toxicology and Molecular Biology Laboratory for Toxicology Support Services at the University of Texas, spoke at the meeting. Dr. Lindsay has extensive experience in analysing the molecular profile of drug responses. His expertise is focused on the evaluation of complex toxicity dynamics, such as the pharmacology of toxicants, the routes of exposure, the host metabolism and the consequent cellular effects in relation to the contribution of specific substances to the risks to health, fertility and to human diseases. The researcher exposed the reasons why Covid vaccines could induce cross-reactive antibodies against syncytin which would compromise fertility and pregnancy outcomes.

Syncythins are physiologically expressed during pregnancy: they intervene in the development of the placenta, in the differentiation of trophoblasts, in the implantation of the embryo in the maternal uterus and in the immunosuppression of the mother's immune system to prevent an allogeneic rejection of the embryo. Due to the remarkable similarity between syncytins and the SARS-CoV-2 spike protein, antibody responses induced by the COVID-19 vaccine could trigger a cross-reaction against syncytins, causing allergic, cytotoxic and/or autoimmune side effects affecting human health and reproduction. MRNA vaccines have the potential to interfere with human DNA through the mechanism of gene silencing mediated by the interfering RNA. The syncytin gene could be silenced, and when the amount of syncytin protein decreases, severe placental defects, poor human trophoblast differentiation, and placental vascular dysfunction occur, resulting in an end of gestation.

The researcher also recalled her own direct experience in this field: "In the mid-1990s, I helped develop a temporary human contraceptive vaccine which ultimately caused unintentional autoimmune ovarian destruction and sterility in animal test models. This was despite efforts to prevent this and the sequence analyses which did not foresee it." It is necessary to underline this passage for the benefit of those fine souls who support the moral legitimacy of vaccines. Vaccines are not only those meritable drugs which eradicated polio or tetanus, but are medicines that can be used for the purpose of pharmacologically controlling human fertility, to the point of definitively compromising it.

Dr. Lindsay concluded her speech by stating that she firmly believes that "all gene therapy vaccines (Pfizer and Moderna) should be discontinued immediately due to safety concerns on multiple aspects", from coagulopathies to fertility.
Therefore, for the researcher there are well-founded reasons to believe that Covid vaccines can cross-react with syncytin and reproductive proteins in sperm, eggs and placenta, leading to reduced fertility and compromised reproductive and gestational outcomes.

Another authoritative scientist, virologist Bill Gallaher, admitted that a cross-reaction can indeed be expected, due to the similarities in the conformation of the beta sheet between the spike proteins and syncithin-1 and syncytin-2. Numerous cases of spontaneous abortions in vaccinated people, as well as numerous reports of menstrual irregularities in vaccinated women, have already been attested by pharmacovigilance observations.

Based on the evidence, it’s clear these phenomena demand investigation; especially now when requests are being made to extend the vaccination to adolescents, from 12 to 16 years, and shortly afterwards to children from birth. That is children and young people who have a mortality rate from Covid of 0.002%, and where the disease manifests itself at most as a severe cold with some lines of fever. But the Moloch to be satisfied - as we know - is the achievement of herd immunity. And to do this, one could potentially sterilise an entire generation.