For the first time in Italy, the Committee representing 1,800 victims of the anti-Covid vaccine has met and is now calling for a parliamentary investigation committee to inquire into vaccine damage. Considerable evidence from doctors, journalists, and many injured people at the congress is causing the wall of silence to crumble. Dr De Maria and Dr Venezia: "Long Covid and adverse reactions, there is a common thread"; Dr Donzelli: "The protection of the triple-vaccinated is already negative after six months, the unvaccinated are infected less than the vaccinated"; Dr Frajese: "There has been a numbing of consciences"; Dr Savini: "In my vaccinated patients +30% of pathologies”. 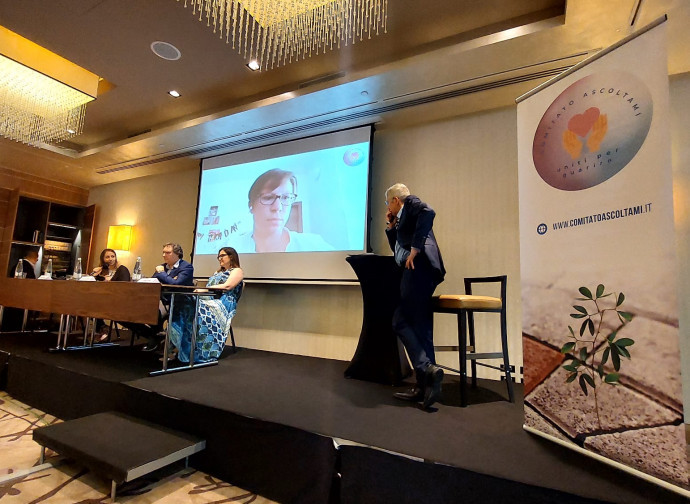 The final appeal was reached after three and a half hours of discussion between doctors, journalists, and patients: “We call for the establishment of a parliamentary investigation committee to shed light on vaccine damage. They owe it to us, given how much we are suffering”. This is Federica Angelini speaking, founder and soul of the committee Ascoltami [Listen to Me] that unites 1,800 victims of the anti-Covid vaccine that was supposed to be safe and instead is disabling thousands of ‘invisible’ victims in Italy who struggle with cardiovascular and neurological problems.

Ms Angelini, and, with her, the Comitato Ascoltami, have pulled off a miracle by telling the country about the unheard drama of those whose lives have been turned upside down since the day they were inoculated, but who are not recognised as invalids by the State and are not even considered for treatment. At the Hilton Hotel in Milan, the first truly medical congress on vaccine adverse effects took place last Saturday, 18 June (HERE the full video). Above all it’s a miracle because it made the adverse effects of vaccines, reversing the diabolical interpretation of risks/benefits, a must to be talked about. Just a year ago, at the height of the vaccination campaign for the over-40s, it would have been impossible to have obtained a conference room as prestigious as the one in the hotel in Via Galvani, in the heart of Italy's industrious powerhouse Milan.

This is also due to the tenacity of Mario Giordano, the director of the programme Fuori dal Coro [Discordant Voices] an Italian television channel on  Mediaset, which since last September, has given voice to the people who have been damaged, thus enabling the Committee to grow and make itself heard, so much so that today, talking about adverse effects from vaccines is no longer taboo, even if the problem, which is enormous, remains underestimated by the State. In fact, the challenge is to force politicians and institutions to take notice and remedy this great Italian scandal, whereby vaccination was practically forced by means of blackmail giving rise to the consequent abandonment of patients who fell under the mythology of the safe vaccine.

And Giordano, who was present with Marianna Canè, author of all the reports on the Mediaset programme on the damaged people and of a scoop on the damaged people of certain batches, was the host of the day, interviewing doctors and journalists. Among the latter, the Daily Compass was also present (THE DOSSIER ON VACCINE DAMAGE) which was credited for having uncovered the first damaged people as early as August 2021, in a climate of silence and omertà in which adverse effects were simply not to be mentioned.

But more importantly, all the victims were present. Like Barbara D'Ambrosio from Turin, one of the founders of the Committee, who after being vaccinated has problems with her eyesight and walking, and who read a dramatic letter from a woman who was vaccinated while pregnant and who passed the adverse effects onto her daughter in her womb.

Or Silvia Lunardi, a Roman nurse on the front line during the pandemic, now struggling with anaphylactic shock following inoculation due to an allergy to one of the components.

Many doctors were present, willing to to go public and tell how they treat adverse effects. Dr Margherita Savini from Venice counted a 30% increase in reports on cardiovascular and skin problems from her patients.

Or the surgeon Attilio Cavezzi who ended up treating cases of thrombosis in the patients he had advised not to be vaccinated because of risk factors such as hyper-activated coagulation. "We try to reduce inflammation because the spike inflames, detoxify, and work on the subjects' immunity. Moreover, what is lacking in today's medicine is to ask on a pathophysiological level 'where do the spikes go, how long do they stay in the body and where do they move to?’ It is a fight that has been going on for months and we don't know whether it will take years”.

Much applauded, even with a standing ovation, Dr Vanni Frajese, a Roman endocrinologist suspended from the Order of Physicians because of his justified criticism of the vaccine and the absence of genotoxicity studies. “Among the various 'charges', the Order also asked me what I thought of the vaccination campaign”. Frajese insisted on the folly of vaccinating pregnant women: “It is known that there is no data available, pregnant women are the most fragile population that exists in the world, who at times cannot even get their hair dyed, and instead they have been exposed because consciences were numbed”. Strong words also on the vaccination of the young: “The idea of vaccinating the young to preserve the old is psychotic”.

Whereas data on the loss of vaccine protection after just 13 weeks was shown by Dr Alberto Donzelli, who holds that it is precisely the triple-vaccinated with boosters who are most exposed to Covid infection.

“The working-age population, aged 18 to 69, has a 4.1 times greater risk of infection in week 13 than the unvaccinated” he said. The vaccinated, therefore, become more infected than the unvaccinated as shown by a study from Qatar “which tells us that at six months after the last inoculation the protection actually becomes negative. This should lead us to an immediate moratorium on compulsory vaccination of people such as health workers”.

Andrea Francesco De Maria practices in Genoa and, analysing the symptoms of his patients, he noticed that many long Covid symptoms are quite similar to the symptoms of adverse reactions. This prompted him to undertake an investigation shortly to be published: “My suspicion is that there is a long Covid from vaccination or that the long Covid is an adverse effect. Many of the long Covid symptoms correspond to vaccine side effects. After all, the virus spike and the vaccine can cause paraesthesia in the same way. Few have noticed this, but the problem is that we have no tools to prove it objectively. Many patients have even had exacerbated post-vaccination side effects after having Covid”.

This fact is also confirmed by Dr Valeria Venezia, who after being suspended from the medical profession made herself available to the Committee by collecting the data of the injured who turned to Federica and the others. “I too noticed comparable symptoms between long Covid and vaccine: mainly paraesthesia, burning, and bone and joint pains. Many patients report that their symptoms increase after the second dose and their condition worsens.

There was also room for Dr Dario Giacomini from Verona, who founded the committee Contiamoci, who was also applauded, especially when he began by saying that “for two years we have been living a State lie”.