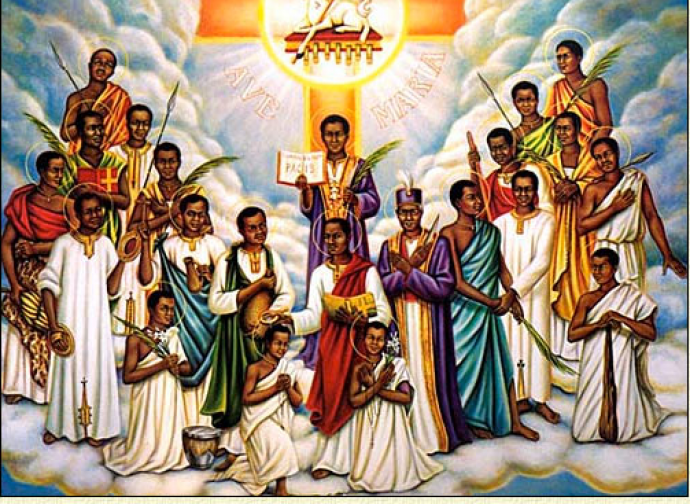 Today the Church celebrates the memory of saint Charles Lwanga, head of the pages of the royal hall, and 12 other Catholic companions from Uganda who suffered martyrdom on 3 June 1886 by order of Kabaka Mwanga II, King of Buganda (a region of Uganda). The sovereign was particularly irritated by the refusal of his subjects to satisfy his homosexual urges.

Together with them, in this same collective commemoration, nine other martyrs are remembered by the Church, for a total of 22 Catholics, killed on different days between 1885 and 1887 (the fiercest phase of a general anti-Christian persecution) and proclaimed saints all together in October 1964 by Paul VI: “Who could have foreseen that together with the great historical figures of African martyrs and confessors such as Cyprian, Felicitas and Perpetua, and the extraordinary Augustine, we would one day mention the beloved names of Charles Lwanga, Matthias Mulumba Kalemba and their twenty companions?”, said the Pope in his homily for the canonization.

The persecutions in Uganda began just a year after the accession to the throne of the very young Mwanga II. He had succeeded his late father Muteesa, who was considered much more astute than his son in managing the balances of power in Buganda. Witchdoctors and fetishists, who wanted to maintain their power in the tribal system and felt threatened by the growing Christian presence, helped to incite the new ruler against the missionaries. Mwanga saw the latter simply as colonizers.

So violent persecutions began, in which the first to fall were some assistants of the Anglican bishop James Hannington, who in turn was killed by the sovereign's assassins on 29 October 1885. The then prefect of the king's hall, Saint Joseph Mukasa, a young catechist who had converted to Catholicism after the arrival of the White Fathers on Ugandan soil, had tried to dissuade Mwanga from his criminal intent. Moreover, as soon as he heard of Hannington's murder, he had reproached the sovereign. St. Joseph Mukasa was also resented by the king for having encouraged the pages to resist the advances of Mwanga, who eventually tired of his subject and ordered his beheading. Before his order was carried out he had second thoughts, but his messengers arrived too late at the place of execution: the martyrdom of 25 year-old Joseph Mukasa was already complete and his mortal remains burned. It was 15 November 1885: that same day a catechumen about 20 years old, our Charles Lwanga, was baptized.

Charles himself was called to replace Joseph as teacher of the pages, but he too - like his predecessor in that prestigious position - put faith in Jesus Christ first. He therefore protected the pages from the king's sinful aims. A few months later, on 25 May 1886, Charles Lwanga was condemned to death along with other Christians. In the night, given the looming danger, Charles himself secretly baptized the converted pages who were still simple catechumens: among them was the 14 year-old Kizito. A few hours later Mwanga called an assembly to question Charles and his pages. The king wanted to see if any of them would decide to save their skins by denying Christ. To the king's amazement, these young newcomers remained firm in their profession of faith.

The condemned were then forced to go to Namugongo, the place of executions, 28 miles from where they were located. Eight of them were killed en route. On 3 June, Charles, along with 12 other Catholics and 18 Anglicans, arrived on the hill of Namugongo. Here they were either burned alive or hacked to death with swords. The martyrdom of Charles took place, according to custom, separately from the others. While the executioner, known as the “Guardian of the sacred flame”, proceeded to burn him alive, the head of the pages said to him: “It is as if you were pouring water on me. Please repent, and become a Christian like me”. On that same day, another martyr, Bruno Sserunkuuma, had said, “A spring that has many sources will never dry up; when we are gone, others will come after us”.

The last of this group of 22 to suffer martyrdom was another servant of the king, John Mary Muzeyi, who was beheaded on 27 January 1887 after spontaneously professing his Catholic faith.

The hill of Namugongo became a place of pilgrimage. And in 1969, five years after their canonization, Paul VI himself visited the basilica-sanctuary dedicated to the Holy Martyrs of Uganda, in the first apostolic journey of a Pontiff on African soil. And in 1993 John Paul II also visited it, recalling in his homily that “the heroic sacrifice of the martyrs contributed to bringing Uganda and the whole of Africa closer to Christ, the true light that illuminates all men”.