"Turks and Azeris want us dead; we Armenians are defending Christianity”

“From where I am, while I can hear the noise of gunfire and falling shells, I see just how huge is the pack of lies spread by the western media”. Teresa Mkhitaryan, the foundress of the humanitarian association “The Seed”, speaks about the attack on her homeland now underway: “It isn’t true that hundreds of persons have died, but thousands; it isn’t true that we launched any attack, but Azerbaijan did; it isn’t true that under direct attack is Nagorno-Karabakh alone”. But here my people are reacting, “my people are bearing witness to both great courage and impressive faith”.
- PHOTOGALLERY 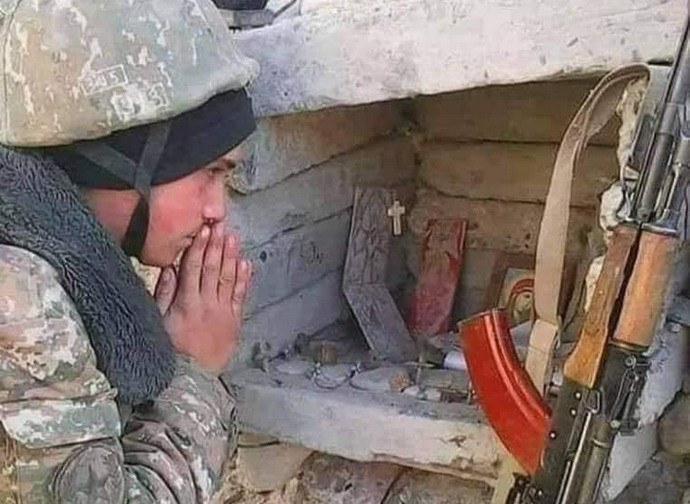 “From where I am, while I can hear the noise of gunfire and falling shells, I see just how huge is the pack of lies spread by the western media”. Teresa Mkhitaryan, in the picture below, together with some refugees, and the foundress  of the humanitarian association The Seed (which was awarded a gold medal in Armenia for its ‘humanitarian approach’) speaks about the attack now underway on her homeland as she works on the northern border between Armenia and Azerbaijan: “It isn’t true that hundreds of persons have died, but thousands; it isn’t true that we launched any attack, but Azerbaijan did; it isn’t true that under direct attack is Nagorno-Karabakh alone, but Armenia. ”

Mkhitaryan, what exactly are you doing in Armenia?
Well. I was born in the capital, Yerevan, emigrated to Switzerland at the age of 19, did my studies there, and pursued a successful career in international finance, where I worked with some very important people. I became a convert to Christianity in Zurich, because in Armenia I had attended school when we were subject to the Communist atheism of the Soviet Union. Despite my conversion, I lived in luxury and according to a worldly mind frame more so than  a Christian one. And this until I decided to go to Armenia to celebrate my birthday. Once home, I met a very poor woman, and that encounter changed my life. I cancelled the party and used the money to prepare food packages, opening a branch of The Food Bank, an Italian humanitarian association for which I had worked in Varese. From that moment onwards, I decided to abandon international finance, even though many persons said I was out of my mind. I then founded the Swiss association The Seed, which enabled us to accomplish an enormous amount of work. Thousands of people around the world joined the association, and this enabled us to purchase 100 houses for Armenian earthquake victims, build kindergartens and schools, distribute 152 tons of food, and bolster the border with Turkey. I am now here helping to feed refugees and persons displaced by this conflict that began two weeks ago. Everything we are doing is for the good of our souls and those we are helping, to bring light and hope, and to draw closer to the Lord.

Where were you when the war broke out?
I was in Switzerland on 27 September and I immediately bought a ticket for Armenia, but the flight was cancelled. It took me six days to get to Armenia. The situation is getting increasingly worse, and from here I can understand the falsehood circulating around the world. The cause of the war is obvious, and yet newspapers are writing that Armenia with only 3 million inhabitants invaded the Azeri, who are backed by Turks and jihadists. This is ridiculous.

So why did the conflict begin?
Armenia is the oldest Christian country. It is located between Turkey and Azerbaijan which consider us an obstacle to the pan Arabic dream. The Armenian genocide perpetrated by the Turks in 1915 happened for the same reason. One and a half million Armenians were exterminated with the most barbarous of methods that Hitler used later to eliminate all Jews. Other Armenians left the country, while others remained to fight with Russian assistance. Unfortunately, when Stalin took over he gave the Armenian region of Nagorno-Karabakh and Nakhivan to Azerbaijan, a state in existence only since 1921. When the USSR collapsed, all the Republics began to declare independence from the Soviet Union, and Nagorno-Karabakh held a referendum on independence supported by 97% of the population. In this land there are 300 Christian monuments. It is an entirely Armenian and Christian territory that has nothing to do with Turkish-Muslim Azerbaijan, now using territorial excuses to wage a dirty and violent war.

Dirty in what sense?
Let me give you just one example. Turks entered a village where there was a woman with her handicapped child in a wheelchair. They hadn’t been able to take flight. Not only did the Turks kill her and her child, they even hatched them to pieces. These are the methods of the Syrian jihadists called in by Turkey that controls part of Syria. These are people that decapitate our young soldiers, recording what they do and posting the video shots. But, silence reigns supreme in the world.

Why such silence in the world?
I am familiar with the world of international finance and the circles of power elites where everyone knows that the mass media are controlled and manipulated to serve the aims of untruth on the part of the group that controls them. Few indeed are the journalists who seek the truth. There are journalists in western countries – including Italy – ready to write that Armenians (3 million inhabitants, and a poor country without natural resources) had attacked Azerbaijan which has 9 million inhabitants and is backed by Turkey 90 million. And yet the president of Azerbaijan is publically know to be one of the most corrupt persons in the world. In addition, Turkey is using NATO weapons. The Turks destroyed the cathedral of Ghazanchetsots with 20 minutes of intense shelling, and Russian journalists present retrieved the code numbers of some shells..

Is this also why Russia is not stepping in?
Well, part of the western countries want to provoke a war between Russia and Turkey over the Armenian territory. In fact, that are also launching strikes on Armenian land.

How do you know this?
Up until yesterday I was with some families we are helping along the northern border of Armenia with Azerbaijan. I spent the whole night long praying the ‘Our Father’ with the constant background noise of bullets and bombs. Russia has signed an agreement with Armenia guaranteeing the latter’s security, and therefore what is happening is none other than sheer provocation. For the time being Russia is not reacting, because of it does, an enormous conflict could erupt.

If no one steps in, however, it will be difficult for only 3 million inhabitants to resist.
Very true. They use very powerful weapons and even non conventional ones, while we have less potent weapons. Thousands of Armenians have died, but it could have been worse. Arriving from the front lines are stories of miracles: Armenian soldiers who hit their targets with only one shot, and enemy shells that fail to explode. A Russian journalist on site has written that God is with the Armenians.

Journalists are therefore permitted access to Armenia.
Our country has an open door policy with journalists and reporters because it has nothing to hide. Azerbaijan, on the contrary is closed to journalists because otherwise they would discover the presence of jihadists and the use of weapons banned by the International community.  Azerbaijan does not even permit the installation of the surveillance cameras that Armenian diplomacy has been requesting for years.

How is the population reacting to this sudden attack after years of peace?

Behind us we have a genocide and subservience to Soviet Russia. We know this is a war for the life or death of Armenia, and that’s why no one is taking flight. On the contrary, many young Armenians are returning: 20,000 Armenians arrived in busses from Georgia. My nephews, my brother-in-law, and my uncle returned from Moscow, and all the young men I know have enlisted in the army as volunteers. Our mothers, like mine, raised us saying: “If we die, we all die together, but before dying we have to have fought”. We are a people aware that we have a responsibility towards God.

There are videos showing platoons of the Armenian army praying the ‘Our Father’ before heading into combat, and evident are some very young soldiers. How’s that possible?

Christianity is at the core of our education. Faith is not just a matter of rite, it is a way of living. Christian tradition and memory of the genocide are very present. During these days I have seen people in Yerevan in line to get into a church. I saw the same thing outside Italian supermarkets during the COVID lockdown. In addition, we have devoted priests who educate children from a very early age to stand up for and defend their beliefs, teaching them their responsibility to bear witness to Jesus because we are His people, small but with a great mission.

In fact, there are pictures of Armenian soldiers kneeling in prayer, or accompanied by priests.

There are also video clips of mothers who very sadly wave their sons off to war. Several are the young men I know who have died in combat; sons of my friends, relatives.. David, a young soldier, said he had spent two hours mulling over what it meant to win the war, and then he understood: “Mommy – he wrote – when someone dies, we say he’s going Home”. Muslims cut our throats, but we die with dignity. I’ve seen so many wounded people, children as well, but they keep on smiling. Priests are in forefront providing soldiers with spiritual support.

There are those who argue that speaking about a religious conflict is counterproductive. Is it true that placing it on this level may encourage other Arab countries to join the attack?
Christians are disappearing for just the opposite reason: we no longer have the courage to speak the truth and fight for it. When the infamous genocide took place, the Turks told the Armenians that if they converted to Islam, they would be saved, they would not have been tortured, and the children would not be slaughtered. . .but they preferred to die the death of martyrdom. If we Christian Armenians are still around it is thanks to this sacrifice; otherwise we would all be Muslims.

What do you hope for in such a scenario?
What I ask of you is to pray the Rosary for Armenia and the Armenians. Only a great miracle can save us. The world has turned its back on us, just like it did 100 years ago. Financial interests, gasoline, natural gas and black Turkish caviar reign and drive decisions.