In the Caucasus, war has broken out once again for the control of the small mountain region of Nagorno Karabakh between Armenia and Azerbaijan. Nagorno Karabakh is the site of one of the many "frozen" conflicts that erupted following the collapse of the USSR and which was never actually resolved with a real peace treaty. This time Turkey is the nation fanning the flames of a renewed conflict whose age-old causes date back to the Armenian genocide of 1915. 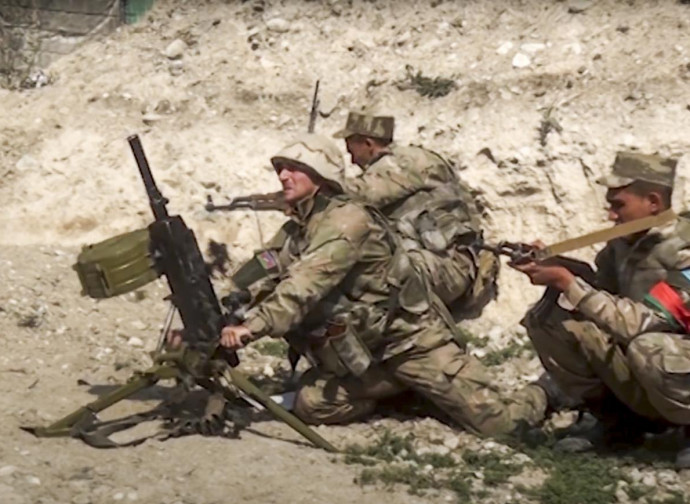 In  the Caucasus, war has broken out again for control of the small mountainous region of Nagorno Karabakh between Armenia and Azerbaijan. Nagorno Karabakh is site of one of the many "frozen" conflicts which erupted  following the collapse of the Soviet Union and halted with an international agreement, yet never actually resolved with a real peace treaty. As in the military incidents of 2014, 2016, and 2019, it is difficult to determine who fired first the shot last weekend. Both sides, the Azerbaijanis and Armenians, believe they are victims of an aggression and each has mobilised troops and declared war upon one another. The resurgence of the age-old conflict coincides, however, with Turkey's expansionism on each of its borders while serving as Azerbaijan’s protector in the Caucasian region. Precisely because of this, a localised war risks degenerating into a much wider conflict, considering that Armenia has its back covered by Russian military.

The president of the Armenian Republic of Karabakh has spoken clearly in terms of a clash of civilisations: "This is not a war between Karabakh and Azerbaijan, or Armenia against Azerbaijan. It is Turkey leading this war effort, placing mercenaries alongside ten million Azerbaijanis against 3 million Armenians." The president’s fear is well founded. Turkey, according to sources reported in AsiaNews, a missionary news agency with close ties to the Syrian opposition, is once again (following the Libyan conflict) recruiting Islamist mercenaries in Syria to fight abroad, even though Azerbaijan firmly denies this.

The Karabakh Republic, inhabited by Armenians and Christians, is nestled in the middle of Azerbaijan, a Shiite Muslim majority nation. The conflict is both ethno-national and religious. The international community has never legitimised Karabakh's independence from Azerbaijan or allowed its unification with Armenia. The Armenian population of Nagorno-Karabakh is ready to fight tooth and nail to avoid being annexed (not only legally, but also de facto) by Azerbaijan. The reasons for this strenuous resistance stem from the early last century during World War I and, especially, the Armenian genocide. Readers should be aware of this to understand the terms of today's conflict.

The genocide of 1915-16 ended with the killing of more than one and a half million Armenians at the hands of the Ottoman Empire.  April 24 (1915) is  still celebrated worldwide as the day to remember the Armenian genocide. What tends to be forgotten is what happened in 1918, when Armenia declared its sovereignty. The new nation, home to hundreds of thousands of refugees from the 1915 genocide, was both willingly and unwillingly protected by the Soviet Red Army. In March 1918,  Bolsheviks and pro-Bolshevik Armenian nationalists also occupied much of Azerbaijan's territory and waged massacres, as they did everywhere during the Russian Civil War (1917-1921). Azerbaijanis suffered fifty thousand causalities, as well as the destruction of hundreds of  their mosques, in what is remembered as the "Azerbaijani genocide" whose official commemoration day is March 31. Azerbaijani historians still place the blame, not so much on communist leaders, but on Armenian Christians. The genocide is the main moral and emotional motivator of Azerbaijani hostility towards Armenians.

The second half of the Armenian genocide began in the fall of 1918, when the Red Army withdrew from the Caucasus and the Ottomans were able to counterattack. Reconquering eastern Anatolia and part of Armenia, they settled in neighbouring Azerbaijan and set up the Islamic Army under Enver Pasha's leadership. Wherever the Ottomans and local Islamic Army, composed of mainly Azerbaijanis, mobilised forces, Armenians were exterminated. In Baku alone,  30,000 were left for dead and throughout Azerbaijan, according to some sources, an estimated 50,000-100,000 Armenians were slaughtered. The third period of the Armenian genocide began in 1920, when the founder of modern Turkey, Kemal Ataturk, rejected the Treaty of Sèvres (which defined Armenian borders considerably wider than what they are today) and reoccupied  the Armenian regions of eastern Anatolia. This all but completed the ethnic cleansing of the local population, brutally massacring an additional 71,000 Armenians.

The Soviets, who ruled the entire Caucasus from 1920 to 1991, while controlling both Armenia and Azerbaijan, froze the conflict. In 1923, Josif Stalin, who was then Minister of Nationalities, decided to incorporate Nagorno Karabakh into Azerbaijan to ensure its territorial continuity regardless of whether the majority of the region's inhabitants were Armenian. Problems surfaced after that but were not solved by Michail Gorbachev, though he revived their national literature throughout the USSR. Partial freedom of expression began to become a reality only in 1987. But it clashed with a political line of the Communist Party, which still saw nationalities as an obstacle to overcome, a legacy of the past destined to disappear. The 1986 program for nationalities still aimed at the "fusion" of the nations that made up the USSR for a "distant future." State atheism, socialism and solidarity among socialist nations, still at the time of Gorbachev, were considered a panacea for resolving all problems. Outbreaks of initial clashes in Nagorno Karabakh and Azerbaijan showed how far removed it was from reality. On February 20, 1988, Nagorno Karabakh Soviets voted for reunification with Armenia. On February 21, betraying the promises of self-determination, the Soviet Politburo rejected the request for border changes.

The population of Yerevan, the Armenian capital, began demonstrating on the streets on a daily basis, as workers proclaimed a general strike. Panicked, Azerbaijani citizens living in Nagorno Karabakh also began protesting publicly while rumours of notorious crimes (rape and murder) against their own countrymen in Stepanakert, the capital of Nagorno Karabakh, spread unchecked. This climate of high tension led to violent skirmishes in Askeran on February 22, when Azerbaijani protesters clashed with Armenian protesters. Two Azerbaijanis lost their lives. Outraged by ever dreary news coming from Armenian regions, Azerbaijanis from Baku and its suburbs literally began to hunt down Armenians . In Sumgait, not far from Baku, a veritable pogrom began on February 27. When Soviet troops entered the town to quell the unrest, the number of fatalities was already 32 (per official Moscow estimates) of which 26 were Armenians and 6 were Azerbaijanis. According to Armenian estimations, the total pogrom victims were actually much higher. In any case, the Sumgait pogrom counts as one of Armenia’s national wounds.

In an attempt to douse the flames, the Soviet authorities decided to send massive troops back to the Caucasus, suppressing local autonomy as much as possible throughout the region. On March 24, 1988, the Soviet army, after a month of demonstrations and strikes in Yerevan, occupied the capital of Armenia. The clashes did not stop and in early 1990, in order to break all independence movements in Nagorno Karabakh, Azerbaijanis unleashed new pogroms. On January 20, 1990, the Soviet armoured divisions, supported by the navy and paratroopers, invaded Baku to crush the Azerbaijani militias and fired shots indiscriminately at both civilians and militia, as if they were operating in an enemy city. Estimates of deaths in this massacre, known as the "Black January", are still unknown. Azerbaijani sources speak of at least 300 victims. The carnage was also attributed to the Armenians, because it was in their defence that the Soviets intervened. In 1991, Armenia and Azerbaijan became independent nations, yet remained historical enemies, precisely because of the catastrophe caused by the Soviet Union's disastrous policy of nationalities. Indeed, the Nagorno Karabakh conflict erupted in 1992, immediately after recognised independence, and has never really ended.