Before Trump’s own eyes, America’s system of power went into lockdown, proving it was no longer a democracy because now it is a given that freedom can be bought. When John Paul II and Benedict XVI spoke of democracy as a potential totalitarian system, this is what they were referring to. Instead, Trump while doing so in unfashionable style, made arguments that lay the foundation for freedom and which make it unable to be bought by the system: arguments about life, God, the nation as a natural community, faith, and natural law. He was a rebel. An anarchist of democracy. 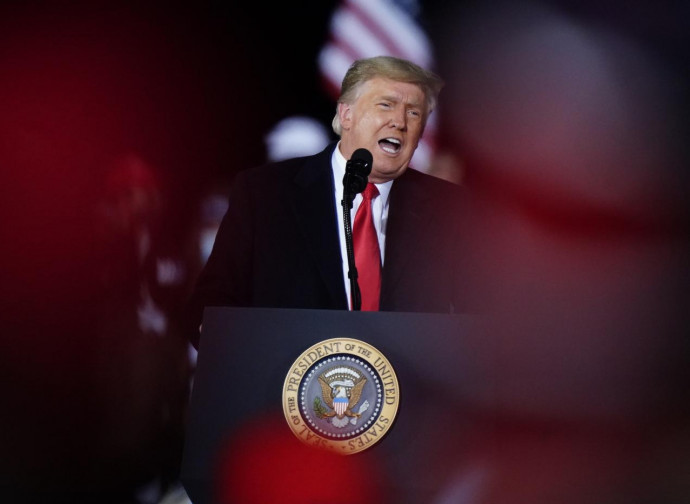 Right before Trump’s own eyes, the American system of power closed in on itself, shored up its ranks and banished the fighting president from American democracy, as if that system of power were actually American democracy, whereas it is really just a system of power in and of itself. The system has many parts, spreads mass falsehoods through the media and promotes new rights through culture. It is a system that slanders and censors heavily those who do not align themselves with its new rights through members of law enforcement and the legal system in key positions of power (as in the American Supreme Court). It chooses its own representatives and with whom it can later count on for assistance. It is a system that implements a citizen-based network of surveillance, despite the fact that modern society is fluid. It invents new dogmas that are falsely democratic and condemns those who do not abide by them as heretics. It is system of power that eliminates its opponents simply because of the colour of their neckties or hairstyle. The system is just a system: it is a network, as Gramsci would say, that "thinks with a thousand brains" in unison and, when the time is right, everything clicks into place and the enemy is crushed.

Trump, at a certain point in time, came out of nowhere and went up against an American system that is primarily liberal, but also involves the Republican opposition. He has been an anarchist of American democracy: a deviant, heretic, rebel, and resister. He has dared to change the makeup of the Supreme Court. He dared to condemn abortion and defund Planned Parenthood. He dared to pull the United States out of many UN agencies and distance it from the Paris climate accords while condemning Al Gore's ideological environmentalism. Trump dared to criticise China and think of a trade structure which isn't dependent on it. He dared not to remove God's name from the public square. He dared to say that there is a globalisation that kills nations and is new form of repression. Trump dared to undo all the clichés the media disseminates daily as the "new gospel". Finally, Trump dared to refuse using the coronavirus as an opportunity for executing new forms of social control and imposing limitations on freedom.

Against all this, the system went into lockdown. It has closed in on itself like the fingers of a hand attempting to crush a potato. Nancy Pelosi had proclaimed before the election that there would be no way Biden would lose. To achieve its objective, this time the system employed weapons of fraud and impropriety, while ever anxious about the enormous importance of the heated political contest. It then used what just happened on Capitol Hill to denounce a fictitious act of sedition and then paint all four years of the Trump administration as a break from the democracy that Americans would finally get back under Biden. However, just the opposite was true: in the last four years of Trump's presidency, democracy had breathed ... and far too much for the system.

Today everyone is talking about the crisis of American democracy. The system has taken back the houses of government and, yet, there is a part of America that is despised, summarily labelled as populist and nationalist, as backwards and redneck. It is a part of America that feels (democratically) excluded. It is the America of the "outcasts " of which perhaps, even Pope Francis  (the pope of the "marginalised") will not be concerned, given his express offer to collaborate with President Biden and, therefore, with the system.

Faced with such division in the United States, the most important thing is to realise that the crisis of American democracy is a result of a certain way of understanding democracy itself. Democracy naturally tends to create an oligarchic system. In fact, all Western democracies are just that, including Italy, especially in the current system’s power bloc. This happens because democracy originally was based on notion of freedom considered to be absolute, but now it is relative and buyable. If freedom is based on non-negotiable principles, it cannot be bought. If it is based only on itself, it can be bought within the political market. The system has now put into place wide-ranging strategies to buy freedom. They are all part of the formal rubrics of democracy. When John Paul II and Benedict XVI spoke of democracy as a possible totalitarian system, they were referring to this. The clamping down of the American system of democracy indicates that it was no longer a democracy because it presupposed that freedom was something that could be bought.

What, then, has Trump done that's important in the past four years, despite doing so in his loud ties and used car salesman tuft of blond hair? He made arguments that lay the foundation for freedom and which make it unable to be bought by the system:  arguments for life, God, the nation as a natural community, faith, and natural law. These are the weapons he employed to fight the system and revitalise American democracy. He was a rebel. We will see if he has been unique or if someone will follow in his footsteps.