In the 19th century, once the ecclesiastical diatribes on the legitimacy of drinking chocolate during the Lenten period had subsided, the monasteries began to produce it. Handcrafted and on a small scale, but of great quality. From the Abbey of Our Lady of the Blessed Sacrament, in Frattocchie, Lazio, to the Bridgettine monastery of Amity, Oregon, we discover some of the most sought-after products, the fruit of a world that combines work with prayer. 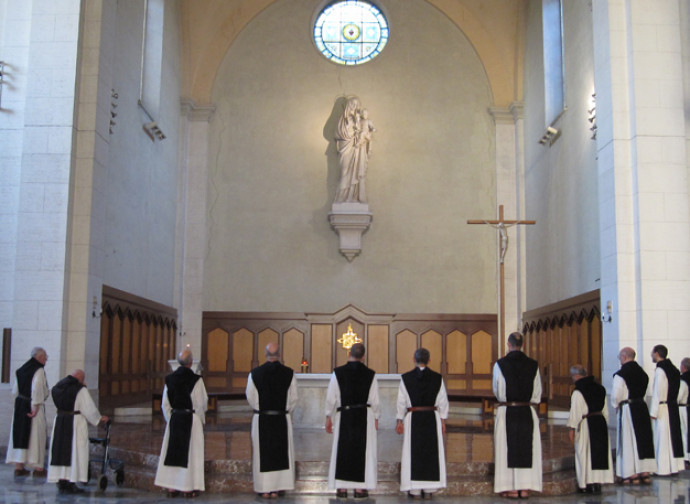 After centuries of diatribes in the Church over chocolate, the 19th century put things right. Having ascertained that drinking chocolate during times of fasting was legitimate, the monasteries began to produce it. Handcrafted and on a small scale, but of high quality.

One of the first monasteries that dedicated itself to the creation of chocolate products is the Abbey of Our Lady of the Blessed Sacrament, in Frattocchie (a hamlet in the municipality of Marino). The Trappist monks began to produce chocolate in Rome in 1880 - with strictly secret recipes - recognisable by the trademark representing the Colosseum and the cross. The Frattocchie factory supplies the monastery of the Three Fountains on the Via Laurentina, in Camaldoli, Chiaravalle, and Pavia. The monastery of Frattocchie deserves to be visited, not only for its delicious chocolate, but also for the intensity of faith that the monks who live there transmit (see photo above). The chocolate they produce, “Il cioccolato dei Trappisti”, is very special, unadulterated, and made following traditional methods.

The same qualities are found in the chocolate produced in the Monastery of Camaldoli, in the Arezzo area, where there is also an ancient apothecary (“spezieria”). The history of the Camaldoli apothecary's shop cannot be separated from that of the monastery's Hospice. The oldest document that records its foundation are the Constitutions of Prior Rudolph I (1074-1088), in which we read that the holy father Romualdo, after having founded the Hermitage of Camaldoli on inspiration of the Holy Spirit and on request of the very religious Bishop Teodaldo of Arezzo, shortly afterwards ordered Peter, prior of the Hermitage, to build a church in the hospice of Fonte Buono - today the Monastery of Camaldoli. The highest quality is also the characteristic of the chocolate produced by the Trappist nuns in another part of the world. Near Prague, in the Czech Republic, stands the Monastery of Our Lady (Naší Paní) of Moldavia. Founded in 2007 in Central Bohemia, this monastery is the pinnacle of chocolate truffles. These nuns strictly follow the Benedictine Rule (ora et labora) and chocolate is an expression of their way of life, based on prayer, work and serenity. The chocolate of the Trappist nuns of Moldavia is entirely handcrafted, the ingredients used are natural and of the highest quality, the recipes are ancient and above all secret. They have been handed down to the nuns by the Italian master confectioners. They are produced without preservatives or colourings, so as not to alter the purity of the chocolate. And the production, carried out entirely by hand by the nuns, is an added value to the high quality of the product.

Also made by hand are the chocolates of the nuns of the French abbey of Notre-Dame d’Igny, a Cistercian abbey founded in 1128 at the request of the bishop of Reims. Behind the high walls of the abbey lives a community of devoted and committed nuns. Part of their time is dedicated to the production of chocolate specialities: they are famous for their bouchons de champagne (‘champagne corks’) a protected recipe of chocolates filled with prized sparkling wine, which are a worldwide success. In 2001, 69,000 were sold; in 2002, more than 70,000. “We find it difficult to keep up with demand”, sighs Sister Agnès-Lucie, head of confectionery. “We also have no time for innovation”. 44% of sales are made locally, in the boutique run by Sister Gabriel. The rest is sold in Cistercian and Benedictine monasteries (41%), through the distribution network Aide au Travail des Cloîtres (Aid to the Cloisters' Work), at some retailers such as Fossier in Reims, by mail order (9%) and on the Internet. 6% of production is exported to other European countries (Germany, Switzerland and Belgium).

We remain in France to mention the Cistercian abbey of Notre-Dame-de-la-Paix, in Castagniers, a hillside village in the Alpes-Maritimes department in the Provence-Alpes-Côte d'Azur region. Until 1860 the official name of the village was in Italian: Castagnera. The Abbey of Castagniers is “sister of Notre-Dame de Lérins”, located on the island of Saint-Honorat. It depends on the Cistercian congregation of the Immaculate Conception. The community settled here in 1930 and, in the 1950s, Mother Marguerite de la Trinité inaugurated a craft chocolate industry. In 1962 the monastery was raised to the rank of abbey.

The abbey community today is made up of 14 Cistercian nuns who live according to the Rule of St Benedict, which invites us to “welcome every guest as Christ himself”, so the nuns welcome anyone who wishes to make a spiritual retreat, whether individuals or groups. Their products are on sale in the shop. For 70 years the small chocolate factory has continued its activity, always favouring the quality of chocolate made with pure cocoa butter. They produce on average two tons per year. One sister works mainly in production, occasionally assisted by another, in particular for the production of pralines - entirely homemade, with Piedmontese hazelnuts and Spanish almonds, lightly toasted then crushed - with which they make the delicious hazelnut chocolates, whose admirers are constantly increasing.

Also in France, in Aveyron, we find the historic Abbey of Notre-Dame de Bonneval, which owes the initiative of its foundation to Guillaume de Calmont d'Olt, Bishop of Cahors (1113-1145), whose family castle still dominates Espalion. At his request, seven monks from Mazan, in the Vivarese region, and their prior Adhémar settled in Pussac. Then, some time later, probably in order to find more solitude, abundant water springs and proximity to the river, they came to settle two kilometres further in, at a place called Bonalde. A wild valley with steep slopes, where large bare rocks sit among beeches, oaks, ash trees. In the middle flows a river, the Boralde de Flaujac. It is a typical Cistercian site, because: “Benedict loved the hills, Bernard loved the valleys”, according to a medieval adage. But the French Revolution sacked the abbey and dispersed the community. The properties and land were sold as national property. In 1875 the Cistercian-Turkish nuns refounded the monastery and five years later they began to produce chocolate in order to support themselves.

Bonneval chocolate is made with great care in the abbey's workshops. It is a type of handcraft production whose tradition has continued in Bonneval since 1878. Here, too, everything is played out on the genuineness of the product: no vegetable fat other than pure cocoa butter is used in the ingredients of chocolates and chocolate desserts. They are famous for the “Malakoff”, a cake created by the great chocolatier of Saint-Etienne, Jean-Louis Pupier, to celebrate the victory in the Battle of Malakoff during the Crimean War in 1855. This chocolate- covered praline bar with hazelnut flakes was so successful that even today it remains a best-seller among chocolatiers. And the nuns of Bonneval make it to perfection. Even a small country like Slovenia is home to a remarkable reality. This is the picturesque village of Olimje, famous for its thermal baths, but also for its castle, which was converted into a monastery in the 16th century. Chocolate produced a few metres away is sold in the village's famous chocolate shop, which is tasted on site by numerous groups of visitors, but also sold everywhere thanks to the Internet.

Before crossing the Ocean, we conclude this European gastronomic tour by mentioning the Abbey of Caldey Island in Great Britain. This is a Trappist abbey, located on Caldey Island off the coast of Pembrokeshire in Wales. Caldey Island has been known as one of the centres of Cistercian activity since the decline of the Celtic era, and prospered during medieval Europe. However, the present abbey was built in 1910 by Anglican Benedictine monks. At the time of its construction, the abbey was described as “the greatest phenomenon in the Anglican community today”. The abbey passed to the Trappist Order in 1929. In 2018, there were about 10 members. They are known for their shortcrust pastry and chocolate (though they also produce lavender-based cosmetics) and they opened an online shop in 2001. Chocolate, like that of other monasteries, is handmade from the best natural ingredients, with no preservatives or colouring agents.

It is impossible not to notice how monasteries have been at the forefront of the history of food: forerunners of today's hotels, hospitals, restaurants, charities and finally of healthy, natural food.

Let us briefly leave Europe for a short tasting journey to the United States. Here we find the Priory of Our Lady of Consolation, in Amity, Oregon. It is inhabited by chocolatier-monks, of the Order of the Bridgettines (founded by Saint Bridget of Sweden in the 14th century). The Bridgettine monks, installed in this monastery since 1986, are self-sufficient, thanks to their gastronomic crafts, especially the production of high quality chocolate. For decades, the monks have refined their extraordinary chocolate candy recipes (sold in small quantities) in many flavours and explored new taste indulgences for their huge silky-soft truffles. When you visit the tasting room of the monastery you will discover many different flavours of chocolate truffles, some of which are not found on the website.

Visiting these places of prayer, where the aroma of incense mingles with those of lavender, honey and chocolate, we think about the life of these men and women who have chosen prayer, meditation and even the cloistered life as their way of life, work, dedication to souls and the glory of God. It is a world far removed from the frenzy that surrounds our own lives, a world where at times we feel enticed to stay. The inner beauty of the places and the people who inhabit them is contagious. It is a beauty that for centuries has been able to unite body and soul, spiritual and material, and to give meaning to a choice of transcendence that is difficult for many to understand.