Spain’s government has given the go ahead for a new “Historical Memory Law”. In Orwellian language, this means establishing a system of "democratic pedagogy" by adapting history to anti-Francoist ideology. This also means an attack on Christianity, with the expulsion of the monks from Basílica de la Santa Cruz del Valle de los Caídos, a  Civil War sanctuary-mausoleum, and placing restrictions on other state cemetery chapels. Spain’s Observatory on Religious Freedom has denounced the situation to the Daily Compass as an act of “barbarism” which calls for the“bishops to take a stand.” 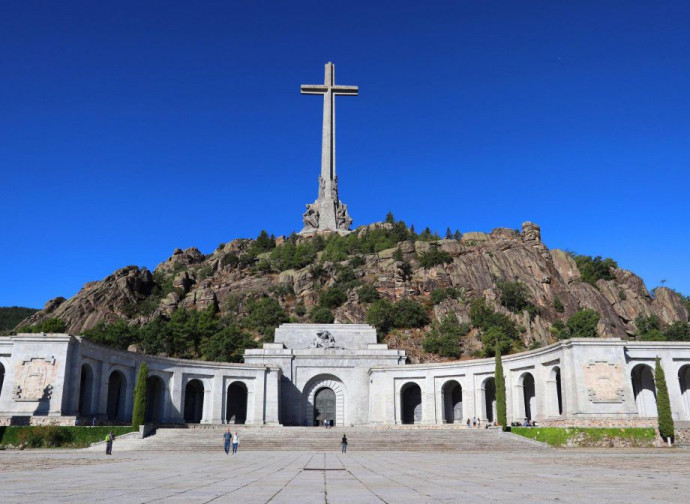 The writing is on the wall for the future of Madrid’s Basilica de Santa Cruz del Valle de los Caídos, a Spanish Civil War sanctuary-mausoleum. Its fate is part of a chess game the Church cannot get out of against Spain’s central government. The Church’s opponent now is determined to declare checkmate at all costs. The secularist and anticlerical government hates the Catholic faith so much that it will do anything to “cancel” any and all of its religious symbols and monuments throughout the country.

Regarding the proposed Spanish government bill, an election campaign promise shared by both Prime Minister Sanchez and his government partner Pablo Iglesias, the bishops and the Vatican must stand up and intervene, not only because the basilica is actually a pontifical building, but also because of the very high symbolic value it has in Spain.

Above all, this is not at all about a celebration of Francoism. Rather is about maintaining the basilica’s identity as a place of reconciliation, a cemetery church where all victims were buried and "levelled" in terms of basic shared humanity at a singular war memorial to commemorate one and all of the fallen.

The sanctuary’s fate, now hanging in the balance, depends in great part on the proposed Historical Memory Law which revises former Prime Minster Zapatero's previous law and possibly rewrites Spain’s history books  - literally, just as the Ministry of Truth did in George Orwell’s 1984 whose Department of Records would modify, amend or delete news that had already come out yet were “unwelcome to Big Brother.” Thus, it would redact history.

Now the same thing is happening in Madrid where a new Historical Memory Law would effectively outlaw Francoism and all its cultural derivations. Following approval from the executive branch, the law will have to pass review by Spain’s State Council. Meanwhile, the law and its 66 articles could be passed and enforced within the first six months of 2021.

The new reform introduces measures worthy of the most egregious totalitarian regimes. First and foremost, this entails anti-Francoist reeducation tactics aimed with revisionist history measures being put in place as insisted upon by certain UN delegates. The Foundation that today bears the name of Francisco Franco, who before becoming dictator was a true peacemaker of a blood-stained nation in which people died for their faith, will now have to undergo serious downsizing after cuts in public funding. What’s more, defending Francoism publically could cost up to 10,000 euros in fines, while a special prosecutor's office will be in charge of searching for so-called desaparecidos (“missing”) Republican militants.

There are also foreseen measures to annul criminal sentences issued by Franco’s old courts while those companies - 70 years later - who used prisoners as forced labor will placed on a watch list. It is never told that the forced labor prisoners used for the Valle de los Caídos construction site were actually given lighter sentences despite being charged with very serious Civil War crimes. They gladly accepted this work in order to obtain milder prison conditions and early parole. Many of them, in fact, even after serving their shortened sentences, remained voluntarily at the mausoleum to help finish its construction.

However, the greatest controversy regards the fate of the Benedictine monks and the future of the sanctuary-mausoleum they oversee. The monument is slated to undergo "re-assignment." This means it will lose two of its main characteristics, that of sacred place and cemetery shrine for all the 33,800 Spanish Civil War victims. To achieve this, it will have to become a place of so-called "memory and democratic pedagogy." This is the terrifying terminology, worthy of the worst Maoism of the prevailing Orwellian “new speak.”

The Benedictines will be expelled “because their presence,” according to Vice-Premier Carmen Calvo, "is incompatible with our goal.” Without the monks (who are under jurisdiction of the French Abbey of Solesmes) and with it no longer being an official house of worship, we can expect that there will be nothing left of the religious structure except the famous  massive cross erected above the basilica. And perhaps not even the cross will remain, although for the moment the government has said its removal is not up for debate.

The Spanish government’s announcement was followed by widespread protests. This is true even for Catholics who are beginning to recognize that the Historical Memory Law is linked to anti-Christian policies. Thus, Maria Garcia, president of the Observatory on Religious Freedom in Spain, told the Daily Compass: "With this law , Spain’s government forgets that during our Civil war there were two opposing factions and that many people actually died as martyrs for their faith. They too must be remembered and recognized. We must have the courage to state that from 1936 to 1929 one of the bloodiest religious persecutions of the 20th century took place on our soil in Spain."

Garcia also appealed to the Catholic Church: "The idea of converting the "valle" into a civil cemetery is absurd. It is also an attack on the Benedictine monks who are guardians of the basilica. The Spanish Bishops’ Conference must act to defend this Catholic church."

Until now, Spanish bishops have kept a low profile. A few individual bishops have intervened, but to avoid causing much of an uproar.
The Archbishop of Madrid, Carlos Osoro, urged that the Valle de los Caídos continue to be a "place where fraternity, reconciliation and peace can be restored.” Even the president of the Spanish Bishops Conference, Juan José Omella, said during a radio program, that this "is not an issue of major concern to the Spanish people who are more worried about ending the pandemic and keeping their jobs" and that "the Benedictines – despite any mistakes they may have made –are there to pray and do good", Omella reiterated his point while raising doubts about the overall success of the operation from a legal point of view.

In fact, according to several legal scholars, Spain’s government would have no authority to deconsecrate the basilica since it would have to mandate a cease and desist order for the Holy Cross Foundation responsible for the structure and then, even so, would need to take aggressive action to evict the Benedictines. The building according to Luis Felipe Utrera-Molina, an attorney for the Franco family, will remain a church and will be placed under the authority of the Madrid Archdiocese. Yet, in the end, the decision is really up to the Vatican in this tug-of-war battle destined to go to Rome.

To give in to the Spanish state would effectively place the Catholic Church in “second command” in terms of exercising its rightful evangelization under the great cross above the Valle de los Caídos mausoleum. It was the Benedictine prior, the ever-combative Fr. Santiago Cantera, who said during a September 14 Mass for the Exaltation of the Holy Cross while pointing to the enormous cross above and urging his fellow monks: "If we have to suffer humiliation and contempt, let us rejoice in imitating Christ who was humiliated and despised. We will face adversity and uncertainty with a supernatural gaze, while staring at Christ’s very own cross."