“Those Poor Clares pray too much.” Expelled from the monastery

The incredible story of Sister Maria Giuliana and five other nuns of the Convent of Porto Viro (Veneto, Italy) who saw their community destroyed two years ago, commissioned by the Vatican at the request of the Bishop of Chioggia and the Franciscan Provincial: the Mother Superior was publicly accused of plagiarism of the sisters and of financial scandals, but the roots of the problem lie in the long resistance of Sister Maria Giuliana against the effort to distort the contemplative life and the Rule of Saint Clare. Among the charges: the presence of statues of Saint Michael the Archangel in the convent. 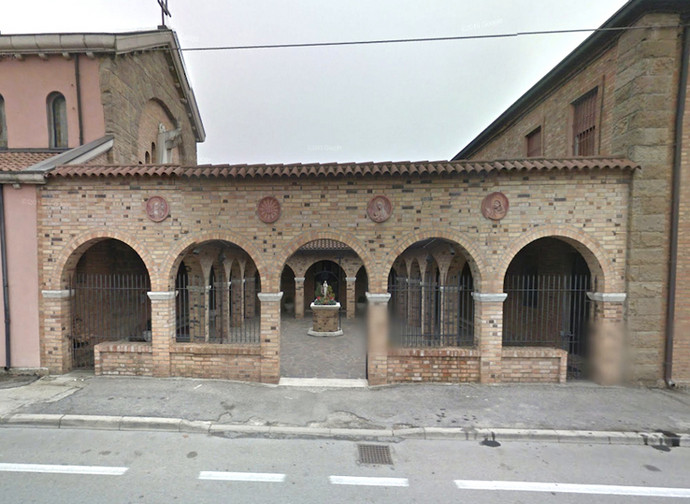 “Tell me the truth, do I look crazy to you?” No, I would say no: sorrowful, certainly, saddened by the injustice suffered, stubborn in the desire to reestablish the truth, yes; but definitely not crazy. And yet Sister Maria Giuliana of the Eucharist, whose secular name is Maria Giuliana Ravagnan, has been accused many times of being “crazy” by her superiors and ordered to go and stay in a nursing home, a fate which she managed to escape by asking to leave her order. Today she lives with five of her fellow sisters in a little building near Rovigo (Veneto), where we were able to meet her.

The cross and some sacred statues in the garden tell you that this cottage has something that makes it different from the other houses around it. Inside, everything has been redone to create the ambience of a convent: the small entranceway serves as a parlor, the living room has been transformed into a chapel, and the cloister is on the second floor. Sister Maria Giuliana and the other sisters have recreated a monastic community based on the Rule of St. Clare, but according to the Congregation for the Institute of Religious Life these six women are no longer religious sisters. Their crime? Not bowing down to the commissioner of the “Immaculate Heart of Mary Community” of the Poor Clares of Porto Viro, in which Sister Maria Giuliana, the “madre” of the community, was abbess for 23 years, up until August 12, 2017.

In that summer of 2017, in fact, in Porto Viro – in the Rovigo Province but the Diocese of Chioggia, near Venice – the Commissioner Sister Ivana Assolini swooped in, determined to change the direction of the Poor Clares convent and to suspend Sister Maria Giuliana. Prior to this, in September 2016, there was an Apostolic Visitation, asked for by the Bishop of Chioggia, Adriano Tessarollo, and by the Provincial of the Franciscan Province of Northern Italy, Mario Favretti, a visit that concluded – Sister Giuliana tells us – with the compliments of the Apostolic Visitators for the life of the community, which had made the convent of Porto Viro reflourish with an intense life of prayer and great works of charity for the poor of the area.  The Visitators left the convent “assuring us that everything was according to the rule and that I ought to thank the Lord for having freed me from the false accusations,” Sister Maria Giuliana says.

What accusations? Probably those that returned several months later to justify the decree of the commissioner: essentially plagiarism of the sisters by the mother superior, and the handling of large amounts of money in an autonomous way by the mother superior without the knowledge of the other sisters. All accusations that the sisters rejected and proved to be false, also explained in one of the many letters to Pope Francis that received no response.

But it seems quite clear that we are dealing with pretexts for putting an end to the experience of a Poor Clair Convent that was a little different from others, simply because they wanted to remain faithful to the Rule of Saint Clare, with a strict cloister and an intense life of prayer, things that apparently are no longer in fashion. This is understood from a passage of the Vatican decree of December 5, 2017, that confirmed the expulsion of Sister Maria Giuliana from the convent of Porto Viro.

As a proof of the plagiarism and conditioning exercised by Sister Maria Giuliana over the sisters, we read that “the Convent is full of sacred images. A statue that occurs in almost every environment is that of Saint Michael the Archangel, ‘protector from the Enemy and from all possible enemies,’ according to the explanation of the sisters.” How curious that we have arrived at the point that the presence of sacred images in a convent is judged to be a scandal by the Vatican, and in particular the image of Saint Michael the Archangel, whose identity and mission are evidently unknown, if they are to quote the explanation of the sisters, taking the necessary distance.

But then we discover that the affair has roots that stretch much further back in time and has to do with the desire to distort the sense and modality of religious life. Sister Maria Giuliana initially entered the convent of Montegrotto (near Padua) in 1982, and almost immediately she found that she had to fight against efforts to modernize the life of the cloister: “Thanks to certain friars, erroneous ideologies penetrated into the Convent, transcendental meditation, Freudian and other psychology; and since I knew that these were grave errors, I opposed them.” To the point that she soon had to change convent, and so she chose the convent of Porto Viro. Once she became abbess, she soon found herself engaged in the same battle: as part of a federation of Poor Clair convents, the convent of Porto Viro was the only one that resisted the watering down of the Rule of Saint Clare, the only one defending the autonomy of convents and the contemplative life.

Back then, however, Sister Maria Giuliana and the convent of Porto Viro could count on a listening ear and support from the Vatican Congregation for the Institutes of Consecrated Life: the Prefect, Cardinal Eduardo Martinez Somalo, and the Undersecretary, Father Jesus Torres, explicitly supported the battle of the convent of Porto Viro many times, to the point of decreeing the separation of the Convent from the Federazione Veneto-Emilia Romagna in September 2000.

This however was only the beginning of a new chapter in the war declared against the “odd man out” Porto Viro; and with the change of climate in the Vatican the enemies of Sister Maria Giuliana seemed to have had good sport: the dozens of letters sent by the sisters to the new heads of the Congregation for the Institutes of Consecrated Life, the Cardinal Prefect Joao Braz de Aviz, and the Secretary Monsignor José Rodriguez Carballo, requesting an opportunity to defend themselves from the accusations, were useless. Thus Sister Maria Giuliana and the sisters were left at the mercy of the Commissioner and the Franciscan Provincial.

“The Commissioner,” Sister Mary Giuliana says, “accused me of conditioning the sisters even after his arrival, but this is absurd; in reality he sequestered me for five months in my cell, taking away from me the ability to communicate with the sisters.” And the other sisters confirm the oppressive climate created within the convent, with grave offenses against the Mother Superior, also on part of the Franciscan Provincial, Father Favretto, referring also to the grave insults and verbal blows made against Sister Giuliana for her resistance to the decision to transfer her to another place. “They called me crazy and they had already prepared my transfer to the Casa Raffael in Genoa,” which is basically a nursing home for sisters in spiritual crisis or with psychological disorders.

The affirmation of Sister Maria Giuliana is confirmed by the decree of October 25, 2017, signed by Cardinal Braz de Aviz, which gives power to the Commissioner to oversee the transfer to this house “for an indefinite time.” The appeal made by Sister Maria Giuliana allowed her to gain some time, but it also made her enemies even more aggressive. And, as we already said, one chapter of this story closed with Sister Maria Giuliana’s request for exclaustration for at least one year, “in order to reestablish my health and rediscover peace in my soul,” and with the Vatican’s response (February 14, 2018) which imposed on her the removal of the religious habit and her definitive separation from the Convent.

In the meantime, five other sisters requested exclaustration: “Not because we wanted to renounce the religious habit,” one of them tells us, “but because we had no other way out: life in the convent was changed, we no longer prayed, the spiritual life was reduced to the minimum and we were constantly controlled; our mail was opened by the Commissioner and by the new novice-mistress, so that we could not send letters to explain our situation. The only way out was to request exclaustration.”

The sisters moved, finding this little house thanks to some benefactors and the help of a faithful woman collaborator of the convent who still assists them: “The exodus from the convent was humiliating, without anything: no money, no food, not even clothing: there is a video that shows them getting in an ambulance and arriving at this cottage with dressing gowns and wrapped in blankets.” (here) Another example of the Church of mercy.

But in the words and face of Sister Maria Giuliana there is not resentment towards those who did such evil to them: “I thank them because I have been able to understand what persecution is. But I want truth and justice: this is my vocation, I am a sister and the truth about the convent of Porto Viro ought to be reestablished.”

The old convent in the meantime has begun a new chapter: today only four sisters remain with the Commissioner, since in the meantime three sisters have died. But have no fear, their places will be filled soon: the Poor Clares of Porto Viro are in fact among the signers of a July 13 letter to the President of the Italian Republic Sergio Mattarella and to the Prime Minister Giuseppe Conte in which they ask for a policy of welcoming for immigrants, of opening the ports, and they say they are ready to host immigrants in their own buildings. The new Church has no more need of the contemplative life; we pass straight to action. (gp)