There is Schism within the Church: we are simply not permitted to acknowledge it

The German Synod has provided us with a pretext for returning to the discussion of the looming Schism within the Church, but over the past years, both the Magisterium and theology itself have evolved in such a manner that the confine between that which is true and immutable and that which is unacceptable, has been breached. The China-Vatican agreement, the alteration of the Catechism regarding the death penalty, the abolition of ‘intrinsic evil’ in Amoris Laetitia, are all three, decisive passages which threaten the intrinsic Truths upon which the Church was founded. 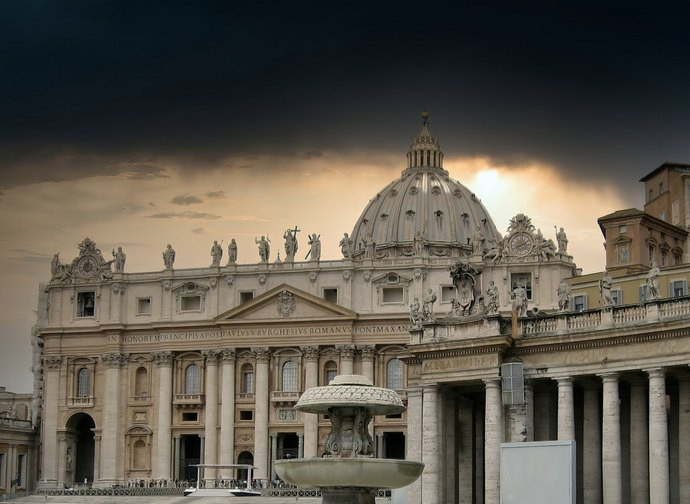 Since the commencement of the German Synodal Way, the word “schism” – like a ghost of Ibsen – continues to hover over the church. The polish bishops have pointed out the danger to their German confrères. Seventy bishops from various parts of the world have penned an open letter, warning them. Various cardinals – even the moderate ones such as Koch – have pointed out the precipice towards which the Germans are directing themselves. But neither Cardinal Marx nor the President of the Bishops of Germany, Bätzing, are giving any indication of being willing to accept those invitations to prudence. The first individuals affirmed that the Catechism is not written in stone, the second individual mentioned has accused those concerned bishops of wishing to hide cases of abuse which the German Synod intends to face and resolve.

Before this image of disintegration, one might ask whether or not a schism were inevitable. The principal question with regard to this matter seems to be the following: does the Official Church still possess the theological notions which would permit it to face this disruptive entanglement, or rather has it lost those categories capable of understanding the problem and outlining a solution? Is there a mutual understanding of what a schism actually is? At this moment in time, is there a shared vision of why it is fundamental to avoid such rupture, as well as to whom the Church should turn for decisive intervention when the danger is imminent?

The main concern of most people involved is not so much the risk of schism, as the perception that the theological and ecclesiastic framework for facing the problem is threadbare and has lost all but its vaguest, most imprecise outlines. Which is a prelude to systemic stagnation and the fatalistic tendency to allow events to unfold as they will.

When Cardinal Marx claims – with regard to the practice of homosexuality – that the Catechism is not written in stone; that it is possible to criticize it and rewrite it, he does nothing more than express the journalistic language which theologians have employed for decades. That is: that the deposit of Faith (and of morals) is subject to the historic process, because the circumstances from which one interprets them become part - in their own right – of one’s knowledge and formulation. By this criterion, which may be defined, broadly speaking, as “hermeneutic”, according to which the transmission of the contents of Faith and morals never surpasses the state of “interpretation”, the theological category of schism loses all consistency, disappearing. That which we consider today as schism (and heresy), tomorrow could very well become doctrine.

At the level of the Universal Church, there have been three recent, extremely interesting events which speak to this point of view. The first was the agreement between the Vatican and Communist China. The agreement is secret, but we may nevertheless state that a schismatic church was absorbed into the Catholic Church. The confine between schism and non-schism has become even more difficult to delineate after the Peking accords.

The second event was the official alteration of the Catechism with regards to the death penalty. This change has propagated the idea that the Catechism is not written in stone, just as the cardinal of Munich has stated. The principal motivation behind the justification of the change, was the recognition that public sentiment on this moral point had altered. Public sentiment, however, is simply a reality which says nothing on an axiological level, or of values, either. With such presuppositions, how can it be denied that the German Church may have matured towards a new sensitivity regarding themes such as homosexuality and female ordination? How may it be defined as schism, if elsewhere similar phenomena are approved?

The third example is the abolition of the moral doctrine of the Church regarding “intrinsece mala” – those acts which are intrinsically evil – contained in the apostolic exhortation Amoris Laetitia. Since the release of this document, it has become extremely difficult to exhort the Catholic population to hold firm to those previous teachings regarding the existence of intrinsically evil actions that may never be performed. After the destruction of such a fundamental notion, will it still be possible to support traditional Church teachings of Holy Scripture, especially regarding homosexual practices?

It seems that the Church is struggling to hold firm to many of its Truths. On the other hand, if the Catechism is not written in stone, then even the definition of schism within its pages may be revisited, and that which yesterday was considered schism, may no longer be defined as such. Actually, it could very well be that those individuals who hold firmly to the Truths of the Catechism as if they were written in stone, may be accused of schism. To negate that the Catechism is not written in stone could become a schismatic pronouncement. With the loss of firmly delineated limitations, all paradoxes become possible. That which has been said may also be extended to heresy and apostasy: concepts whose modern usages and definitions lack clarity. Consider this one example: “obstinate doubt” may be considered an act of apostasy according to n.2089 of the Catechism, yet the faithful are now taught systematic doubt, as they are exhorted to not ‘become rigid’ in their application of doctrine.