The Wedding at Cana, Veronese’s masterpiece

Paolo Caliari, known as Veronese, is famous among other things for his illusionistic decorations and his portraits. But his most famous work remains The Wedding at Cana, a gigantic canvas – with a history of setbacks – in which he depicts the episode of the first miracle in the public life of Jesus. 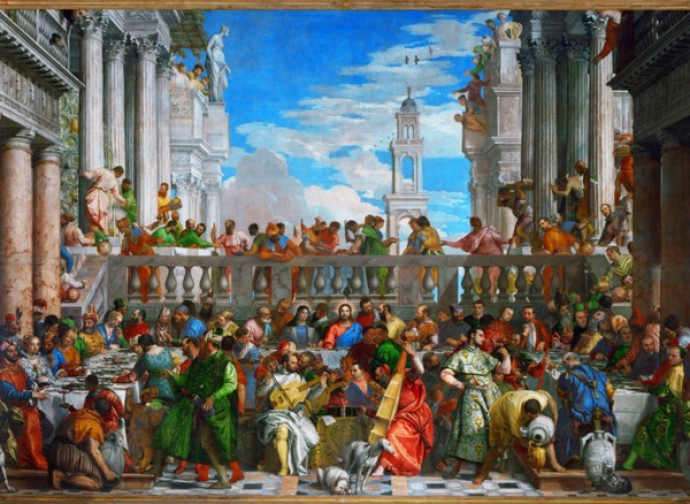 In recent weeks we have seen paintings depicting the baptism of Jesus in his 30th year. A rite by which John the Baptist, who was a prophet and descended from a historic priestly family (Luke 1:5), legally presented Jesus to all the people and consecrated him, by the power of the Holy Spirit, as the Messiah-King (Luke 20:1-8; Acts 10:37-38; 13:24). We then witnessed Christ's retreat into the desert, where he remained for forty days and suffered the temptations of the devil.

Then he returned to the river Jordan, and the Baptist pointed to him with these words: "Behold, the Lamb of God who takes away the sin of the world!" (Jn 1:29). From that moment on, Jesus began to gather the first disciples around him: John of Zebedee, Andrew and Simon Peter, Philip and Nathanael (cf. Jn 1:35-51). It was probably the month of March in the year 29. In that year Jesus went on a pilgrimage to Jerusalem for the feast. For the first time he drove out the merchants from the Temple. The Baptist said of him: "Whoever accepts the testimony [of Jesus] certifies that God is true". (Jn 3:33).

Also that year, around April, he was invited to a wedding feast at Cana in Galilee, together with the disciples and his mother, Mary. During the feast he performed the first miracle of his public life: he changed water into wine. One of the most beautiful paintings that depict this episode is the large painting by Paolo Veronese, exhibited in the Louvre.

Paolo Caliari, known as Veronese, was born in 1528 in Verona and died on 19 April 1588 in Venice. Although he enjoyed great popularity during his lifetime, especially in Venice, he was ignored by the critics of his time: only Francesco Sansovino mentioned him in his 'Guide' of 1556. However, Veronese constituted with Titian and Tintoretto the triumvirate of Venetian painters of the late Renaissance.

Veronese is known as a great colourist as well as for his illusionistic decorations (trompe-l'œil) in fresco and oil. His best-known works are refined narrative cycles, executed in a dramatic and colourful style, with majestic and scintillating arrangements. His real surname remains unknown: the painter signed himself Paolo Spezapedra (his father's nickname), Paolo di Gabriele, Paolo da Verona, or Paolo Caliaro. The tradition of art history speaks of Paolo Caliari. He would eventually be known as 'Veronese' because of his hometown.

He was born to an architect and stone-cutter father, the seventh of ten children. He gained his first artistic experience in his father's workshop, where he learned to model materials in relief and showed great talent for detail. Later, he was apprenticed to Antonio Badile, one of the members of the so-called 'Veronese school', where he refined perspective and architecture, but also became familiar with the vividness and colour in the composition of pictorial figures. Before he was even twenty years old, he was famous in Verona for decorating houses and making several altarpieces for local churches.

In 1552 he settled in Venice and his fame grew. With the support of Titian and Sansovino, he and six other painters (including Tintoretto) were commissioned to decorate the Biblioteca Marciana. He became the favourite artist of nobles and ecclesiastics. 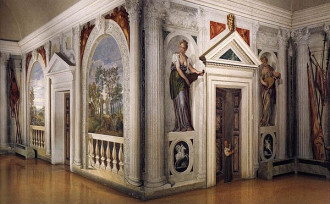 In the Verona region he undertook the decoration of the Villa Barbaro (photo) owned by Daniele Barbaro and his brother Marcantonio. In 1556 they had hired the famous architect Andrea Palladio for the construction of their villa and then entrusted the pictorial decoration to Veronese, whom Daniele Barbaro had met around 1553, when he was creating his compositions for the Aula delle Udienze (Council Chamber) at the Doge's Palace. In this villa Veronese painted frescoes that mark the height of his art; among them we must mention Universal Harmony, or Divine Love surrounded by the Olympian gods, Venus and Vulcan with Proserpine, also Bacchus and the Nymphs. Dozens of rooms are decorated with frescoes by Veronese and everywhere architectural space is challenged through the use of pictorial illusions (trompe-l'oeil).

During this same period, between 1562 and 1563, Veronese painted the most famous of his works, The Wedding at Cana, which he had been commissioned to paint for the refectory of the Benedictine monastery on the Island of San Giorgio Maggiore in Venice. As in other paintings by Veronese depicting a banquet, the scene reflects the festivities that were common in Venetian life at the time.

The Wedding at Cana is one of the paintings assigned to France by the Treaty of Campoformio of 17 October 1797 as war contributions following the first Italian Campaign. On 31 July 1798, The Wedding at Cana entered the Muséum Central des Arts, the present-day Louvre Museum. It is exhibited on the first floor, in what is now the Salon Carré. It is an extraordinary work of art: a canvas measuring 67 square metres and depicting 130 characters, many of whom, like Pietro l'Aretino (1492-1556), were contemporaries of the artist.

The extraordinary painting has suffered a series of setbacks. In 1815, Austria, the occupying power in Italy, demanded the return of the Wedding at Cana to Venice. Dominique-Vivant Denon (1747-1825), a French diplomat (as well as an engraver and writer), managed to convince the Austrian curator that the fragility and size of the painting would make it very difficult to transport. In exchange for Veronese's painting, Austria received La Madeleine chez le Pharisée, by Charles Le Brun “to add to the existing collection in the refectory of the Benedictine convent of San Giorgio Maggiore”.

In 1870, the painting was put into safekeeping at the Brest Arsenal. It returned to the Louvre the following year. In 1939, it was decided to evacuate part of the collections. A crate containing The Wedding at Cana was loaded onto a trailer hired by the Comédie-Française, headed to Chambord, then Louvigny and Loc-Dieu Abbey. In November 1942, the painting returned to the Louvre. In 1947, the restoration commission judged the painting to be in good condition, despite "the peeling off of the paint along the edge of the left-hand column (...) due to the collapse of the cylinder on which the painting was rolled".

From 1990 to 1992 the painting underwent a much publicised restoration. This restoration was carried out on scaffolding, in situ, and facing the public. The vast surface of the canvas required a team of six restorers, whose principles, methods and means of implementation were strictly identical and who achieved, through their great experience and talent, a unique result where no trace of the six restorers’ handiwork was noticeable. At the end of the restoration, on 3 June 1992, during handling, the work was torn in several places in the secondary parts of the composition.

Restoration of the support was immediately undertaken by Yves Lepavec, but it was another incident that caused discussion: it was discovered that the cloak of one of the characters was not always the same colour. The question arose as to whether the colour hitherto known to the public was the original or a repainting (a botched restoration from a previous century). After the restoration, the lawyer Arno Klarsfeld and the model Carla Bruni campaigned for the return of the painting to the Benedictine refectory of San Giorgio Maggiore in Venice. But their struggle was unsuccessful. However, a faithful copy is on display in its original location in the refectory of San Giorgio Maggiore.

Veronese is a precursor of the Baroque style and his art is often associated with Mannerism. He uses bright colours, depicts very detailed scenes, characters clearly detached from the background, with strong contrasts and theatrical architecture. His light palette, his coloured shadows, his poetic universe, the sensual grace of his characters, and his sense of decoration make him a master of 16th-century painting. His most famous murals remain those that decorate Villa Barbaro, in Maser. He is also famous for his series of portraits with incredibly natural faces (he was particularly interested in faces). 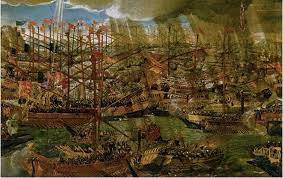 When he died in 1588, Veronese did not leave a school, but his work would influence all subsequent painting and many artists, such as Velásquez or Rubens, and later, in the 19th century, Delacroix and Cézanne.

But Veronese is also important for another reason: he took part in the Battle of Lepanto on 7 October 1571. He also immortalised what he saw in a painting titled Allegory of the Battle of Lepanto, painted in 1573, which is on display in the Galleria dell'Accademia in Venice. He took part in that battle, with the Christian League (Holy League) wanted by Saint Pius V, together with 60,000 other fighters from different European countries, led by John of Austria. He won with them, giving new life to the hearts of Christians. He celebrated that victory with them. A victory of faith.