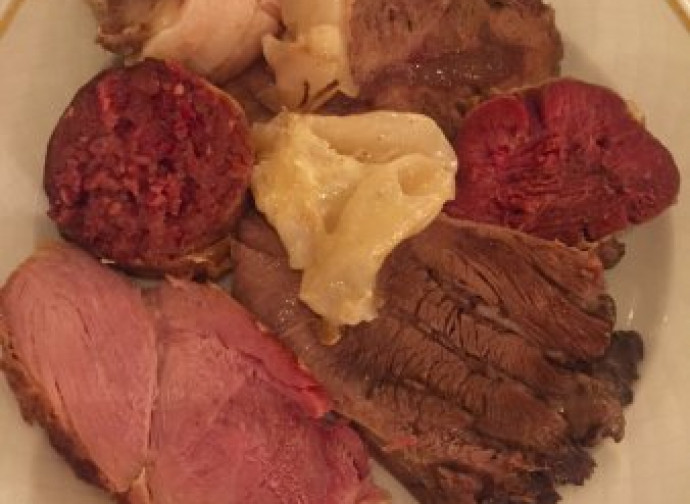 The pearà sauce is the true gastronomic soul of Verona. Pearà is a dish so beloved and so traditional that it has even fuelled a legend in the Verona area. A tale in which history, fantasy, and cuisine come together to create what for the people of Verona is almost a myth.

Legend has it that Alboin, king of the Lombards, took Rosmunda as his wife. The king killed his wife's father, Cunimondo, in battle. The woman decided to starve herself to death. The court cook invented a sauce so tasty and nutritious that it restored Rosmunda's strength. That tasty sauce was pearà.

Pearà, a term from the Veronese dialect which translates as "peppery", should not be confused with peverada, a sauce made from chicken livers, with which it has only the use of pepper in common.

Put the cotechino in a pot with cold water, pierce it with the prongs of a fork, add salt and simmer for 2 hours, covered, over a low flame.
Now prepare the boiled meat: peel the garlic and onion and clean all the vegetables.
Transfer the prepared herbs to a pot with 3 litres of water, bring to the boil and cook for 10 minutes.

Meanwhile, prepare the pearà sauce. Dissolve the marrow in a saucepan with a little stock, add the breadcrumbs, stir, add salt and pepper, grated Parmesan cheese and, a little at a time, the boiling stock, well degreased, and continue cooking for an hour.
Add enough hot broth as needed to obtain a creamy sauce: the consistency should not be too fluid nor too dense.
Add the boiled cotechino to the meat and keep warm.
At the moment of serving, drain the meat from the broth, cut it into slices or pieces, arrange them on a serving dish and serve with the hot sauce.

Notes
While the beef is boiling in the broth, some foam will form on the surface: remove it with a skimmer.

Make sure you boil the broth on a gentle heat, otherwise the meat will fray and become stringy.