The Virgin sleeps, before the glorious Assumption

An ancient theme linked to today’s solemnity is that of the Dormitio Virginis, with the Latin expression literally indicating the ‘Virgin’s Sleep’ before the Assumption. Among the most beautiful frescoes in this regard is the image of the Madonna del Transito of Canoscio (in the province of Perugia). In the solemn definition of the dogma of Mary assumed into Heaven in body and soul, Pius XII’s Apostolic Constitution Munificentissimus Deus does not use the term “death”, but the words “having completed the course of her earthly life”. And, in any case, the faithful have always believed that Mary’s sacred body was not subject to the “bonds of death”, such as the corruption of the tomb. 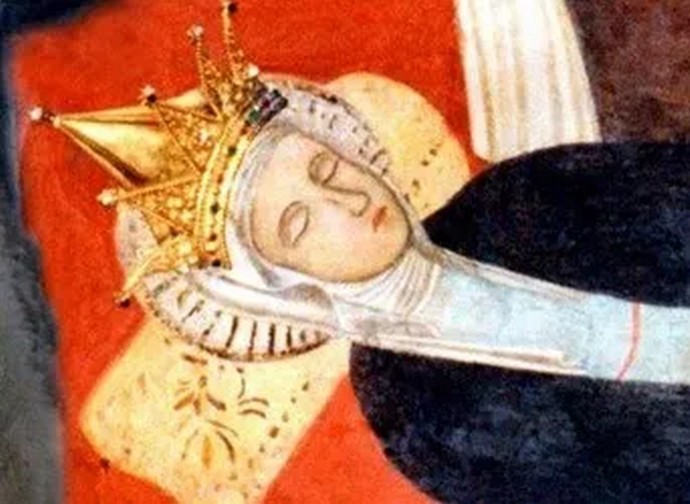 A corner of Paradise on Earth. The Sanctuary of the Madonna del Transito of Canoscio could be described as such. The majestic sanctuary is located on the top of a hill in Città di Castello, in the province of Perugia (central Italy). The historical origin of Umbria’s most important Marian shrine is still shrouded in mystery. The holy place preserves a special painting depicting the Virgin Mary in an urn. She is depicted with her eyes closed, as if in a deep sleep. This is the image of the so-called ‘Sleeping Madonna’, deeply venerated and celebrated by thousands of faithful who pay homage to the Umbrian sanctuary every 15 August, the day of Mary’s Assumption into Heaven. 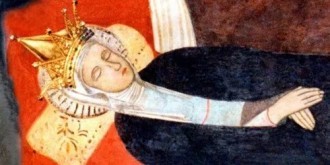 Mary, therefore, is “sleeping”. Not “assumed”. On this journey to discover the image of Canoscio, it is important to pause - at least for a moment - on the term “sleeping”. What is meant by the “dormition of the Virgin”?  We are helped by the original Latin term “Dormitio Virginis”, which is also understood as pausatio (rest), transitus (passage), depositio (burial) and dies natalis (birth into heaven). These moments are followed by the resurrection, the elevation to heaven, and the coronation. The oldest word is found in the Greek dictionary: κοιμησις, which translates as lying, sleeping. The Latin word dormitio literally means sleep, not death.  To shed some light on this, it is important to mention the most important papal document on the Assumption of Mary. It is the Apostolic Constitution “Munificentissimus Deus” (1950) of Pope Pius XII:

“The glorification of Mary in her bodily Assumption is a truth deeply rooted in the religious sense of Christians, as evidenced throughout the centuries by countless forms of specific devotion, but especially by the language of the liturgy of the East and West. The holy fathers and doctors of the church, echoing the liturgy, clearly speak of the resurrection and glorification of the Virgin’s body on the feast of the Assumption as a truth known and accepted by all the faithful. Theologians, dealing with this subject, show the harmony between faith and theological reason and the appropriateness of this privilege, using facts, words, figures, analogies contained in the Holy Scripture. Having thus ascertained the faith of the universal church, the pope deems the time has come to ratify it with his supreme authority.”

The document continues with the proclamation of the dogma of the Assumption:

“The immaculate Mother of God ever virgin Mary, having completed the course of her earthly life, was assumed into heavenly glory in body and soul. Hence if anyone, which God forbid, should dare wilfully to deny or to call into doubt that which we have defined, let him know that he has fallen away completely from the divine and Catholic Faith”.

The document, therefore, speaks to us of the assumption of the Virgin’s body and soul, “having completed her earthly life”. For the Virgin Mary, the word “death” is not used except to describe it in “analogy” - we might say - with the Resurrection of her Son:

“In the liturgical books, which record the feast of both the Dormition and the Assumption of the Blessed Virgin, there are expressions that are in some way concordant in saying that when the Virgin Mother of God ascended to heaven from this exile, things happened to her sacred body, by the provision of divine Providence, that were in keeping with her dignity as Mother of the Incarnate Word and with the other privileges bestowed upon her. This is asserted, to give an illustrious example, in that Sacramentary which Our predecessor Hadrian I, of immortal memory, sent to the Emperor Charlemagne. In it we read: “Venerable to us, O Lord, is the festivity of this day on which the holy Mother of God suffered temporal death, but still could not be kept down by the bonds of death, who begat your Son, our Lord, incarnate from herself’. 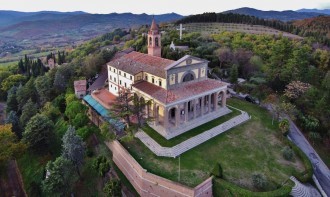 Mary “is not humiliated by the bonds of death”, therefore. As we have understood, the theme of the ‘Mary’s Dormitio’ has many facets, all of which are fascinating and have inspired many painters. The image of the Madonna del Transito of Canoscio takes us back to a popular tradition dating as far back as 1348.  It all stems from a votive promise at the time of a terrible plague. Vanni di Iacopo, an inhabitant of the hill of Canoscio - in fulfilment of a vow - decided to leave his heirs a sum to have an image of the enthroned Virgin Mary with the Child Jesus in majesty painted. On a wall in the Umbrian town, an image of the Virgin Mary was painted, sleeping in a sort of urn. The author of the delicate fresco is unknown. Most probably it was a painter of the Sienese school. On either side of the “sleeping” Mary are the twelve Apostles.  Above this is the Assumption and Coronation of the Blessed Virgin in the midst of angels.

Year 1406. The first small church was built around this image. Many believers flocked to this sacred place to ask for graces. The small chapel became unable to contain the thousands of believers who came to view the miraculous image. A new sanctuary had to be built. On the feast day of 15 August 1855, the Bishop of Città di Castello, Monsignor Letterio Turchi, blessed the first stone of the new sanctuary. The workers who began this new construction - among them many local farmers - numbered more than five hundred. At midday on 23 October 1857, the new sanctuary was finally completed: forty-four metres long and eighteen metres wide. On 16 September 1888, the image of Our Lady was crowned. The crown had been donated by the Chapter of St Peter’s. On 8 September 1905 - under the pontificate of St Pius X - the façade was inaugurated with a new colonnade.

Any member of the faithful standing before this sublime image cannot fail to recall the verses of the hymn to Our Lady of Canoscio:

“Of the graces of the Lord
She is the high dispenser:
She hastens to the prayer
Of the contrite sinner!

Do you not feel that the world
Cannot give you peace and quiet?
All of you, all of you, run to her
What comfort she will give you!

Upon the hill of Canoscio
She has placed her beautiful throne
To give graces and forgiveness
To those who will turn to her”! 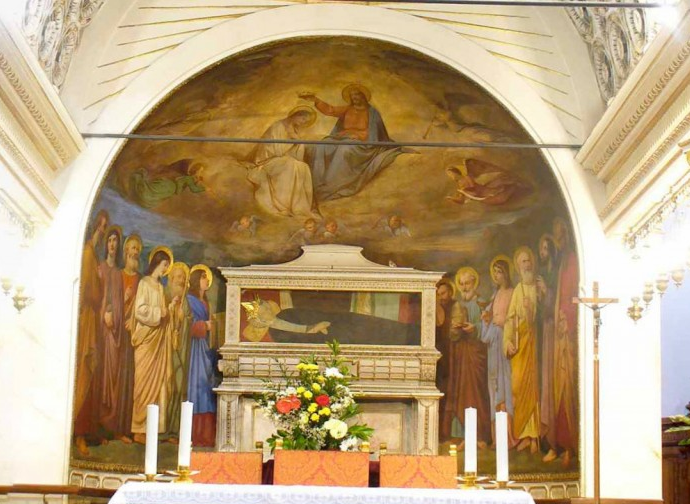