The "sacrifice" on stage at the Sanremo song Festival

A rapper is invited to the most famous Italian song Festival by the director because of his desire to live despite being confined to a wheel chair with ALS. The young male sings a hymn to life with words of the beauty of sacrifice (the affection of his loved-ones) and the rosary that keeps the devil of desperation away. Anyone suffering can’t help but be struck. 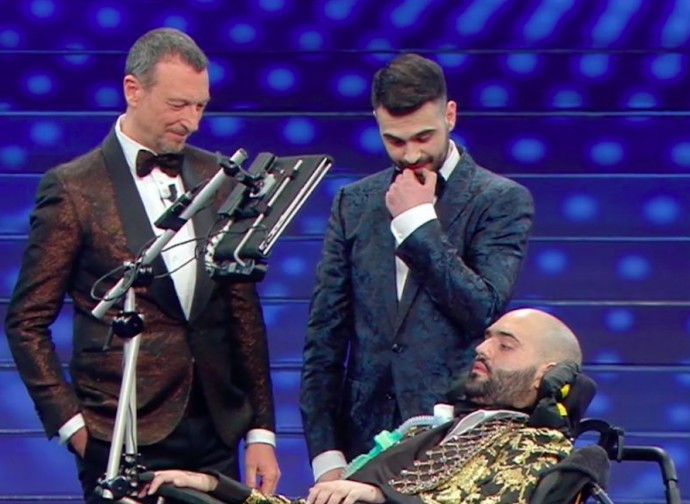 It is true that the heart of men, even those who do not know it, even those who seek death as an escape route, or those who implore the right to death for fear of suffering, is made for life.

This was demonstrated in an unusual occurrence at the current Festival of Sanremo, the most popular Italian song festival, which takes place every year in early February in the famous town in Liguria, north-western Italy. It is a festival that lasts five days and is followed on TV by more than half the television audience and is endlessly commented on by national newspapers. Precisely because of its popularity, the Festival has also become the haven of “political correctness” and a source of continuous controversy. This has happened again this year for certain performances that have ridiculed or distorted the Catholic faith, and for the presence of a rapper whose lyrics are disgracefully offensive.

But what does all this have to do with the celebration of life? It has to do with it because, despite having been discarded at the selections, the rapper Paolo Palumbo was invited on stage at the Ariston Theatre (where the Festival takes place) by this edition’s host, Amadeus. Palumbo is not just any rapper: he is also the youngest SLA sufferer in Europe. Now twenty-two years old, he fell ill at seventeen. But above all, Palumbo is no ordinary rapper because, paralysed and helped to breathe via a tracheotomy, he not only sings about the power and beauty of life, but, in a culture that now generally eschews any suffering, he has managed to bring into the limelight the word “sacrifice”. By explaining the value of renunciation in order to achieve something greater. By singing of existence as a battle and showing what it means to live manfully. Thus, shackled to a wheelchair, Palumbo reminded men of how tall they can stand.

He first did it by composing these words for his song: “In the life of each of us there is a dream to be realised, but they say to get what you want you have to fight, I really don't feel like giving up because if there is hope I want to try”. Later, helped by a vocal communicator that reads the movements of his eyes, he explained that his brother “Rosario (who gave up everything to help him, ed.) and my wonderful family taught me what the word sacrifice means, dedicating their lives to me without asking me for anything in return, except to stay here with them”. This is to say that it is worth the effort to live an existence filled with the presence of those we love and that it is worth suffering the pains of illness to enjoy the greater good of our loved ones.

But Palumbo also escapes the relativist interpretation that would usually relegate these witnesses to some freak show, thus making believe that they are free to choose to play whatever character they want. “Thanks to their love”, continued Palumbo, “I discovered an inner strength that I didn't know I had and that I would like to share with you, because I am convinced that we all have it, even if we are not aware of it”. To say that there is no sick person who needs people who want to “compassionately” eliminate them, but only people who need to be supported to discover their own strength. Who need someone to tell them “you are worth my tears” and to whom they can reply “you are worth my pain”.

In fact Palumbo has aimed another jibe at the culture of death that uses the term “futile medical therapy” to abandon the sick and not resuscitate them: “Just over a month ago I faced a difficult moment, a respiratory crisis. If it hadn't been for the skill of the doctors and the support of all the people close to me, I wouldn't be here today. When I woke up from resuscitation I thought about how lucky we are to be alive”. Therefore, the singer-songwriter reminds us that the most widespread and serious evil is not that which afflicts the body, but that which afflicts the soul with selfishness: “If we need a change, it is above all a change of heart, where the most dangerous disabilities, such as lack of empathy and tolerance, lie”. That's why in his song he condemns those who judge the sick from the outside or those who say “If I were in that condition I'd rather die”. “Did seeing me in a wheelchair bother you?” he asks in his song. “This disease is scary seen from the outside”, but “I give hope to every sick person”.

At the end of the lyrics the youth expresses what sustains all this love, sacrifice and life. What, in a few words, makes him happy: “I believe in and pray the Rosary and it is this that keeps my assassin away”, the tempter who would make us believe the opposite: that the sacrifice is greater than the prize. At the end of the performance he received a standing ovation.  Of course, it may also be that for many people Palumbo's testimony was simply seen as a spectacle, as an emotion aroused by a young man who has made his own choice. But it is certain that those who suffer cannot have failed to see a light. And this, for the Festival of Sanremo, is more than enough.