The real epochal change is in Church-State relations

Right from the start and until quite recently, the spiritual power of the Church had never accepted to be placed on the same level as the latest ruler’s temporal power. But today you are considered a good Catholic if you support the UN objectives for 2030, if you get vaccinated, if you support the ecological transition. It is the completion of the secularisation process. 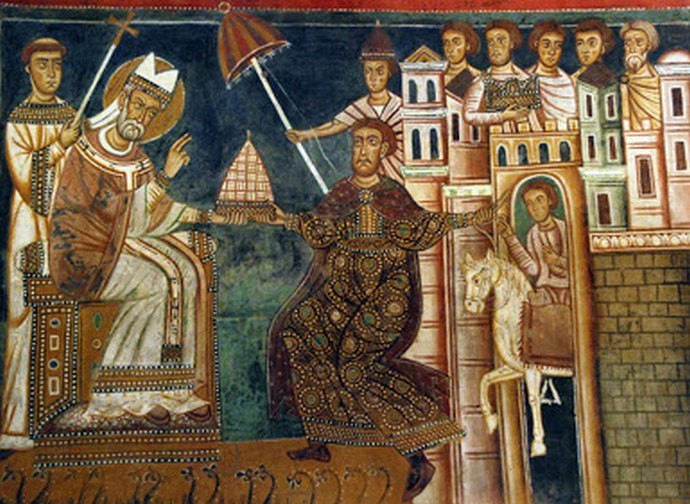 In the relationship between what used to be called spiritual power and temporal power, a substantial change is evident today which is in contrast with the tradition of the Catholic Church, from its foundation until recently. The change is of considerable magnitude. Prepared over time, it now seems to be tacitly accepted.

We all know - even if we are not experts on the history of the Church - that throughout the centuries of Christianity, the spiritual power of the Catholic Church had never accepted to be placed on the same level as the latest ruler’s temporal power, let alone to depend on it. In fact, even if episodes of this kind did occur, they were anomalies, temporary deviations due to human weakness or historical contingencies.

Jesus reminds Pilate that he would have no power if it had not been given to him from above. St Ambrose did not allow Emperor Theodosius to step into church after the massacre of Thessalonica. Gregory VII excommunicated and then pardoned Emperor Henry IV at Canossa. St Thomas said that "in spiritual matters one must obey the pope, in temporal matters it is recommended to obey the ruler, but better still to obey the pope, who occupies the summit of the two orders". Two other Thomases - Beckett and More - did not mince their words regarding the immorality of their rulers. When modern states came into being, episcopates appealed to the pope so as not to remain prisoners of national Churches, such as the Gallican.

The nineteenth-century Church was the main challenger to the absolute sovereignty of the modern state, in a no-holds-barred struggle. During totalitarianism, it represented, despite the difficulties and failures, a reserve of freedom based on truth. The Church has always raised its voice, exercising its own specific action on political life, comparable to the action of grace on nature and of faith on reason. This action is of another order, a higher order, but the distinction between the two orders does not mean that this action does not exist, or that it is distant and indirect. It means instead that it concerns the temporal, but with a view to an end that is not temporal, an end without which the temporal cannot even be what it is.

If we now consider the situation today, it’s evident that this relationship no longer exists and that the two powers appear to coincide. The centuries-long dialectic seems today to have ended in concordism. The Church no longer raises its voice to remind the political power of its obligations towards justice and true religion. This does not even happen when the ruler passes laws and implements policies that are blatantly inhuman and anti-Christian. No churchman today stands up to openly challenge a head of government, a regional governor, or a mayor to confirm the rules of justice on radical questions of good and evil. Episcopal conferences mediate. They dialogue and invite dialogue. The bishops remain silent and let the dull communiqués of the bishops' conferences do the talking. Political regimes with many inhuman aspects are ignored by the Church leadership. We never read any pronouncements by the Councils of European Bishops' Conferences (Comece and CCEE) criticising the policies of continental supranational institutions. Even the agendas of conferences, Catholic social weeks, and days of reflection are copied from those of political institutions, so that today every assembly activity of the Church is concerned with the "transitions" established by political (and economic) power: the priorities of the ruler are also those of spiritual power.

We have never seen a Church so interfaced with political institutions, a spiritual power so at ease in its relations with temporal power, careful not to interfere but to cooperate. We have to disregard the scene where Fra Cristoforo with his finger raised to the sky exclaims - "there will come a day …!” (cf. Alessandro Manzoni's The Betrothed).

The position taken by the Church with regard to Covid has crowned this whole picture. Catholics today are good Catholics when they are happy with their own rulers (if they are liberal), when they are willing to give their own uncritical contribution to the anti-Covid policies and the famous "transitions", when they work for the achievement of the UN objectives for 2030, when they believe in the current European Union and have confidence in the Biden presidency. I almost forgot, and when they have faith in science.

From this point of view, the situation seems rather ridiculous. In truth it is quite serious. It is the political realisation of secularisation, which Father Cornelio Fabro, famous philosopher and founder of the Institute for Higher Studies on Unbelief, Religion and Cultures, defined in these words: "we have gone from a dominance of the sacred to the invasion of the profane into the life of the sacred and the ousting of the sacred itself": God can only help us if He is confined outside the world. There is no point in being subtle and distinguishing between secularisation, secularism, and laicism. It’s a method that has been discarded. Had things been like they are today, Saint Ambrose would have had to open a discussion table with Theodosius, Gregory VII would have had to apologise to Henry IV, and Pius VII would have been happy about his transfer to France on Napoleon's orders.