The people, the Pope, and Mary: the consecration rejoins together heaven and earth

With last Friday’s solemn Act of Consecration, after an intense penitential liturgy in which the Holy Father asked God's forgiveness in the name of all, there was a "rejoining" of Heaven and earth. The Church, the world, Russia, and Ukraine are now the property of Mary, who approaches the throne of God as our Advocate. The Act performed yesterday - the Consecration, the Communion with the bishops, the historical reasons - matches the modalities requested by Our Lady. And it is from this objective fact, with the invitation to return to God, that we must start again. 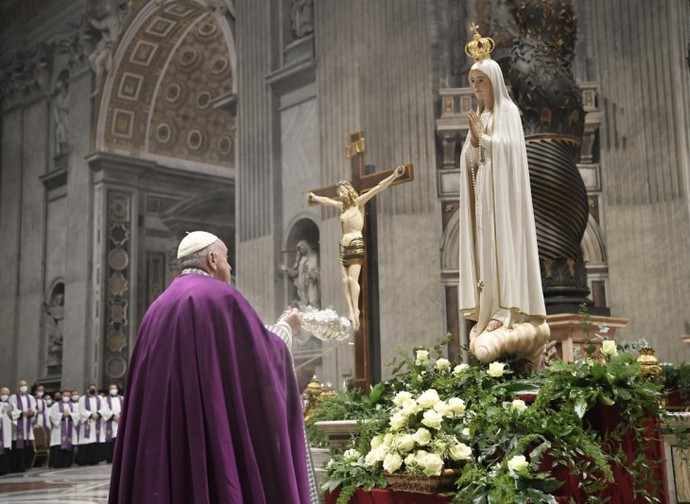 An intense penitential liturgy, sober, collected, imbued with silence, has placed the Church in its position of truth before God. The acknowledgement of guilt, the need for forgiveness, the outstretched hand asking for the help that alone can restore hope, in a world that has reached the depths of sinfulness. And then the long-awaited Act, which has kept the world in suspense, which has kept God in suspense; just as the whole of creation and the Holy Trinity were kept in suspense more than two thousand years ago, that moment of silence between the announcement of the Archangel Gabriel and the response of Mary of Nazareth.

Our ears heard the words of the Holy Father asking for forgiveness, in the name of all, and consecrating the Church and the world, Russia and Ukraine to the Immaculate Heart of Mary. Now the ears of faith let us hear Our Lady, our Advocate, appearing before the throne of God, holding the world, the Church, and especially Russia and Ukraine, in Her hands.

What happened Friday night was a "rejoining" of Heaven and earth, the tearing down of a wall that our world had built, to make Heaven inaccessible to mankind, and the rebuilding of a bridge. And this bridge could only be rebuilt in the One who generated through Himself and gave to the world the eternal Pontiff, Jesus Christ our Lord; it could only be rebuilt through the one who was made Vicar of Christ and therefore Supreme Pontiff (i.e., he who acts as a bridge). Between Her and him, between Mary and Peter, there is a very special, unique, irreplaceable relationship, which from the apparitions of Fatima onwards has become extraordinarily special. Several times last Friday, the Pope and Our Lady gazed at each other intensely, embodying in that gaze the pain and hope of all.

On Friday we witnessed the re-establishment of that order and that way forward which Our Lady had indicated a century ago in the small Portuguese village, and which closely binds together the people of God, their supreme Pastor on earth, and the Mother of God. At Fatima, Our Lady asked Her people to make reparation, intercede, and atone, through Communion on the First Saturdays, the Holy Rosary, the offering of sacrifices and of themselves. She then asked the Pope, in communion with all the bishops, to consecrate Russia to Her Immaculate Heart, thus strengthening the irreplaceable role that the Pope and the Catholic hierarchy have in God's plan of salvation, for the benefit of the whole world.

On Friday, for a while, we saw this order re-established; we saw the Lord's people, great and small, shepherds and flock, asking God for forgiveness, uniting in prayer for this solemn act, recognising the voice of the shepherd, who finally led them to place their hope in the protection of the Mother of God, more than in any other earthly initiative. We saw the Supreme Pontiff - with all the pastors of the Church - accept with humility and docility the request from Heaven, performing a consecration that he alone could accomplish. In fact the Blessed Virgin did not come to replace the pastors and the faithful, but to ask them to live according to the mission that the Lord has entrusted to them.

It is objectively difficult to assert that the manner in which the Consecration to the Immaculate Heart of Mary of the Church, of the world, and in particular of Russia and Ukraine, was accomplished does not correspond to what the Blessed Virgin requested at Fatima. And this despite what one may think of the "validity" of the act performed by St John Paul II in 1984 and regardless of the countless critical considerations that can be made about this controversial pontificate.

The heart of the Act lies there, in the decisive words: "Therefore, Mother of God and our Mother, to your Immaculate Heart we solemnly entrust and consecrate ourselves, the Church and all humanity, in a special way Russia and Ukraine". All the bishops and priests of the world joined the Supreme Pontiff in this Act that contains all the essential elements requested by Our Lady in 1917, each of which is pregnant with meaning; a meaning that we humans, continually overexposed to continuous, rapid, mostly superficial communication, no longer understand.

Firstly, there is the explicit form of Consecration, which is also accompanied by entrustment: the importance of this word - Consecration - and the act it expresses cannot be exaggerated. After decades of secularisation at all levels, to the point that, in the Catholic sphere, we have witnessed not only the systematic demolition of the sacred, but even the criticism of its very idea, the Act of Consecration represents a complete U-turn. After years and years of working tirelessly and senselessly to erase every element of sacredness even in the intimacy of worship, in obedience to the slogan that "everything is already sacred" - and so, due to a rigorous internal dynamic, nothing is sacred any more – the Consecration recalls and implements that great movement for which mankind exists: leading everything back to God, consecrating everything to Him.

Secondly, the "addressee" of the Consecration, namely the Most Holy Trinity through the indispensable mediation of the Immaculate Heart. After years of Marian minimalism, we return to recognise "solemnly", to use the words contained in the text, that Mary can (and must) be the recipient of the Act of Consecration, because she has been established as Mediatrix of all graces. This has already been mentioned (see here, here and here) and there is no need to dwell on it further. But how beautiful it is to underline the infinite patience of Mary Most Holy and Her respect for what Her Son established; Her mediation, in fact, did not mean to replace the human mediations decreed by God, which culminate in that of the Supreme Pontiff, but it stimulated them, expected them, ennobled them.

Thirdly, the object of the Consecration. Some have criticised the fact that the consecration formula added the Church, the world, and Ukraine, whereas Our Lady had asked for the consecration of Russia alone. And it is true that Sister Lucia, in reference to the consecration of 1982, pointed out that Our Lady had asked not for the consecration of the world, but of Russia alone. A "disobedience" that does not however disregard the request of the Mother of God, but recognises her power over the entire universe and the universal Church, without mentioning the nation She so eagerly awaited. With regard to Ukraine, it seems obvious that it should be consecrated together with Russia, not only because of what has been happening for years now (although some pretend that the war only broke out at the end of February), but also because they are two nations intimately linked by their baptism into the Christian faith and the consecration of Rus'-Ukraine to Our Lady by Yaroslav the Wise. A bond that is purified and strengthened by this consecration.

And finally, the adherence of all the bishops and even all the priests in the world, who had been expressly called to join in this act. It is objectively difficult to find a Consecration, from 1952 to the present day, including that of 1984, more in keeping with the requests of the Mother of God than the one that took place yesterday. And it is here, on this objective side of things that we need to pause, accepting the invitation to return to God that Francis addressed to everyone several times last Friday.