The paradox of Medjugorje

The go-ahead for pilgrimages to Medjugorje and the large presence of cardinals, archbishops and bishops at the youth festival in Medjugorje recently, doesn't mean Rome intends to recognise the Marian apparitions, instead tends towards their obscuration. 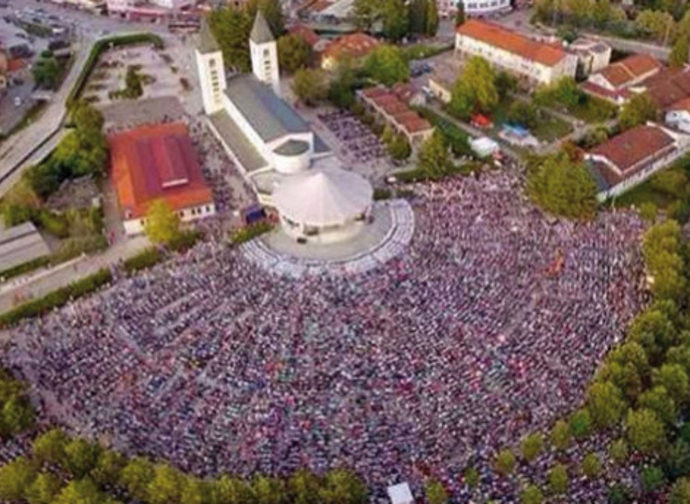 The 30th youth festival which took place in Medjugorje recently, hosted an important novelty this year: that is, a large presence of cardinals, archbishops and bishops; the outcome of last May’s decree by which Pope Francis decided to authorise pilgrimages and particularly recommended pastoral guidance.

The official Vatican statement said that it was due to the Pope's "pastoral attention" which recognises "the abundant fruits of grace" that have emerged in recent years "from the considerable flow of people going to Medjugorje." The go-ahead for pilgrimages does not imply however, "an authentication of the well-known events", or the alleged Marian apparitions in continuation since June 1981.

The Church as an institution arrived in force in Medjugorje to meet the tens of thousands of young people who, in the first week of August, converge from all over the world. Among the important senior Vatican prelates who took turns to celebrate the masses and lead the catechesis, we note Cardinal Angelo De Donatis, papal vicar of the Rome Diocese, Archbishop Rino Fisichella, president of the Pontifical Council for New Evangelisation, Archbishop José Rodriguez Carballo, secretary of the Congregation for Institutions of Consecrated Life. And this is just to name a few. Such an important presence suggests that, despite the due official prudence regarding the authenticity of the apparitions, there is now a favourable climate for their recognition in Rome.

This would certainly be a surprising turning point considering that in several press conferences the Pope let himself go and made sarcastic comments about "Mary the postman." Indeed, on the return flight from Fatima, 13 May 2017, Pope Francis - referring precisely to Medjugorje - had said verbatim: “I personally am more negative, I prefer Mary as Mother, our Mother, and not a head of a post office, who gives a message every day at a precise hour. This is not the Mother of Jesus.”

While many were left wondering what could have prompted Pope Francis to change his mind and approach, it is interesting to note that in the meantime a paradox is emerging: the more Rome shows signs of openness towards Medjugorje, the more the presence of Mary risks being obscured.

The first indication is precisely in the decree that has liberalised pilgrimages to Medjugorje. Jesus, as a criterion for discernment, said that the tree is known by its fruits: "Do we gather grapes from thorn bushes, or figs from thistles? Thus every good tree bears good fruit but a bad tree bears bad fruit "(Mt 7: 16-17). The Holy See now recognises the fruits are certainly good but avoids talking about the tree. This is an obvious contradiction. Certainly, the prudence the Church has always had towards apparitions is justified, above all when they are still in progress. But this is only partially true, because it becomes increasingly untenable to try to promote the good fruits whilst denying the tree.

The amazing graces that so many faithful have experienced and continue to experience by going to Medjugorje, do not come from breathing the fresh air in Herzegovina, nor because the local Franciscan friars possess any particular charisms. Not only the visionaries say they see Mary, but the many converts, the multitudes who have received the grace of physical healing, all speak of "being blessed by Mary". The question about the tree from which the fruits are derived is therefore unavoidable.
At present, however, priests and bishops who lead pilgrimages can  speak generally about the faith and of Mary but without referring to the visionaries and their messages.

At this point there is a need for further clarification: no believer is obliged to believe in Marian apparitions, even those officially recognised; and Marian apparitions go under the heading "private revelations." As the Catechism states, these "do not belong to the deposit of faith. Their role is not to "improve" or "complete" the definitive revelation of Christ, but to help live it more fully in a particular historical epoch " (CCC 67).

Therefore, Mary appears to guide and comfort us in the struggle against Evil, helping us to identify it in the precise historical circumstances in which we live, preparing the second coming of Christ. (Diego Manetti, Why Our Lady Appears, published by La Nuova Bussola Quotidiana) The divine breaks into history through the Marian apparitions and becomes our companion: the messages are not a negligible option, they are a fundamental part of the apparitions, because they explain why Mary appears in a certain place, in a certain time and in certain ways. What sense would devotion to the Our Lady of Fatima have for example, if the messages given to the three little shepherds (communism, world wars, etc.) and the experiences granted to them (the vision of hell) were ignored? Marian pastoralism that ignores the historicity of the presence of Mary, is easily transformed from the word of God to human words.

This risk appeared even more evident with the presence of so many important Vatican prelates at the youth festival in Medjugorje, and points to the second sign. Looking at the week's homilies and catechesis, we note that - just to avoid a possible "authentication of the known events" - there has been almost no mention of Mary and nothing of what happened in Medjugorje. We read inspiring words full of spirituality, but that could be pronounced in the same way, at any time, in Rome, Sydney, Timbuktu or anywhere else in the world.

The pilgrims who go to Medjugorje, however, do not want to be simply reassured of their choice of spiritual retreats, they have the right to know if the tree is good. And, if it is good it means that Our Lady has made herself present in Medjugorje for a reason, to communicate something specific to us, to enable us to understand where we are in the history of salvation and what is actually required of us. The faithful want to follow what Our Lady tells them.

Even if the whole Vatican were to go to Medjugorje, to preach on other topics, it is not a contribution to the recognition of the apparitions, but their obscuration: the ecclesiastical hierarchy stands in the way between Mary and the faithful, making it more difficult to receive the messages and follow what Our Lady indicates.

This is the great paradox we are experiencing. If we look at the great travail that the Church is going through and the need for solid points of reference to remain firm in the faith, we suspect that it might not be coincidental.