The only painting signed by Cecco, Caravaggio's model

Francesco Boneri, known as Cecco del Caravaggio, was the master's apprentice, but also his servant and model. Few people know his name, but everyone knows his face. He is the Saint John the Baptist, the Saint Matthew, and the face of many other protagonists of the genius' paintings. But he was also a painter. With only one signed painting: an Expulsion of the Merchants from the Temple, which is worth a visit to Berlin. 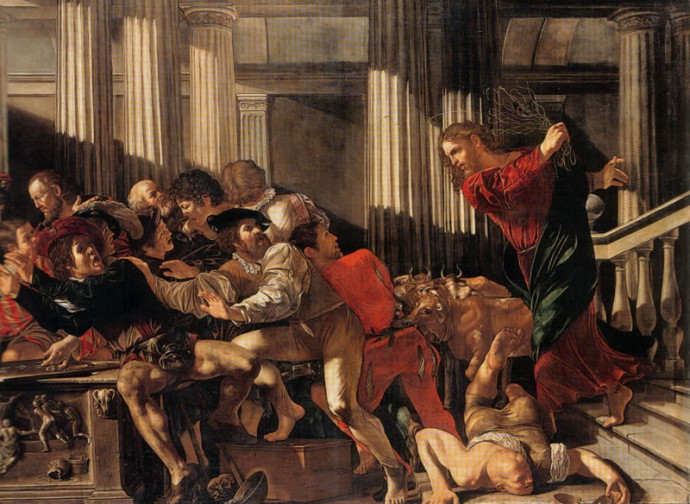 Few people know Francesco Boneri, known as Cecco, by name. But everyone knows his face. Because he is the model for many famous paintings: Saint John the Baptist, Sacrifice of Isaac, Conversion of Saul, Saint Matthew and the Angel, Amor Vincit Omnia, David and Goliath, and many others. All signed by Caravaggio.

In fact, our Francesco known as Cecco was also called "Cecco del Caravaggio" or "il Caravaggino" (1580 - 1630). This is because the young man lived with the great artist for years. But not, as the gossips suggested, as a lover. There is no evidence of this. On the contrary, a 1605 parish census listed a certain "Francesco" who lived with Caravaggio in his rented rooms in Rome, described as a "garzone" [apprentice], without specifying his age.

An apprentice to a painter was a kind of factotum: his work involved grinding colours, mounting canvases on frames, and applying primer. It was a kind of apprenticeship during which a young man became familiar with the basics of the trade. He was actually considered a servant, which is why the relationship between master and apprentice was not necessarily formalised and financially binding. Posing as a model for the master was part of the normal duties of the apprentice and sleeping with the master - they were alone in the house - was not uncommon among artists' servants and models.

According to the parish document, both the painter and the boy regularly took communion during Mass. But in addition to the fairly menial jobs Cecco did, there was the privilege of watching the master at work, observing his technique, and even asking him questions that Caravaggio answered. And Cecco learned.

But Caravaggio did not only teach him the secrets of painting but also the use of weapons, making him a companion on adventures. In fact, many episodes (police reports and various injuries) confirm this aspect of their friendship: he was also a great frequenter of taverns and was 'dagger happy'. Cecco did not limit himself to spreading the base colours when he was preparing canvases. In fact, according to some testimonies, Caravaggio allowed his apprentices to make small contributions to the canvases (plants and trees, details of room decoration or accessories in the clothing of the characters). And Cecco did not hold back. On the contrary, he loved contributing to the master's masterpieces. And not only that: he also tried his hand at creating his own works.

He painted many works, all of a good standard. But he never signed them. Except for one, which is also the one that interests us most, because it depicts a unique scene from the public life of Jesus: the Expulsion of the Merchants from the Temple (ca. 1610), kept in the Gemäldegalerie in Berlin.

The scene takes place under the porticos of the outer courtyard of the Temple of Jerusalem, where a flourishing market was set up, particularly active on feast days, with moneychangers and the sale of animals (doves, lambs, and oxen) for sacrifice.

In the painting, which depicts the episode of the Expulsion of the Merchants from the Temple, also known as the Cleansing of the Temple, we see Jesus Christ reacting with extreme energy and forcefulness, using a whip made of strands of cord, against those whom he considers to be profaners of the Temple.

There are also the merchants and money changers, who recoil in fright at the energetic reaction of Jesus Christ (one of them, shown lying on the ground trying to scrape together some coins, is a symbol of human greed). The animals in the courtyard were brought there to be sold as sacrificial offerings in the Temple during the Easter period.

In addition, there are some carefully rendered details in the scene, often of symbolic value, such as the money changers’ counter, which rests on a Greco-Roman altar. The scene depicted is inspired by the account of the event in the Gospel of John, which is the only one to mention the "whip of cords" with which Jesus Christ "drove all out of the temple, sheep and oxen":

“Now the Passover of the Jews was at hand, and Jesus went up to Jerusalem. And He found in the temple those who sold oxen and sheep and doves, and the money changers doing business. When He had made a whip of cords, He drove them all out of the temple, with the sheep and the oxen, and poured out the changers’ money and overturned the tables. And He said to those who sold doves, ‘Take these things away! Do not make My Father’s house a house of merchandise!’ Then His disciples remembered that it was written, “Zeal for Your house has eaten Me up’”. (John 2:13-17).

One cannot remain indifferent in front of such a powerful painting: we almost seem to hear the shouts of the frightened merchants, the noise of the stalls thrown to the ground, the cries of the animals, and the holy wrath of Jesus. But despite the beauty of the paintings attributed to him, it is difficult to give an overall assessment of Francesco Boneri's artistic activity, since none of his works are signed (except for the Expulsion of the Merchants from the Temple). The paintings attributed to him show a very easily recognisable style and a vehement adherence to Caravaggio.

But Cecco, while remaining very attached to the manner and style of the master, represents one of the most original voices within European Caravaggioism. And his painting of the expulsion of the merchants from the temple is well worth a trip to Berlin to admire it up close.