The myth of synodality is a return to Babel

The preparatory document speaks of a synod aimed at a new humanism and “to plant dreams, draw forth prophecies and visions” with absolutely no mention of conversion and mission. The focus thus shifts from faith (and reason) to "democratic" reforms. It is the collapse of Catholic culture. 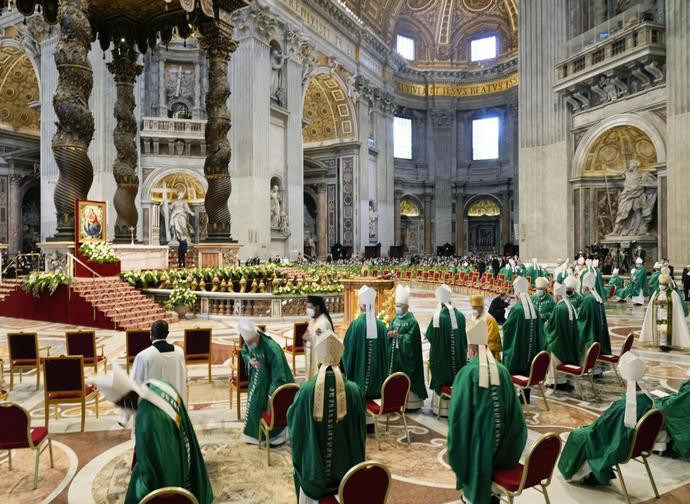 The preparatory document for the synod on synodality makes no secret of the fact that the aim is to "design and implement a 'new humanism', promoting in a synodal manner the contribution of each person according to his or her areas of commitment and competence". So one wonders whether the synod will address issues such as secularisation, widespread atheism, the collapse of priestly and religious vocations, their formation, moral life and grace as conditions for receiving the sacraments, religious ignorance, works of mercy and charity, and so on.

There seems to be no trace of any of this; only of politics, economics, social justice, solidarity, the common good, sustainable ecology, all with a view to achieving an "integral humanism". A question arises: is the humanism brought by Jesus Christ, who, as St Irenaeus says, brought all novelty by bringing himself (omnem novitaten attulit semetipsum afferens) no longer sufficient?

Furthermore, the document proposes ten thematic nuclei: "fellow travellers, listening, taking the floor, celebrating, co-responsibility in the mission (as baptised), dialogue in the Church and in society with the other Christian confessions, authority and participation, discerning and deciding, formation in synodality". The aim of the next synod, like the German one, seems to be the internal democratisation of the Church. It should be noted, in fact, that conversion and evangelisation are absent; yet the Second Vatican Council states that "the Church is missionary by nature" (Ad gentes 2), not synodal; therefore it would be sufficient for it to follow the evangelical method adopted by Jesus: the encounter with mankind in the environment where he lives, the call to follow Him (vocation) in the Church which is actually con-vocation, the sending out in mission, by word of mouth and the invitation to conversion. Instead, we have moved from the slogan of the 'all ministerial' Church coined at the time of Paul VI, to the 'all synodal' Church of Francis.

But Lumen Gentium 18 states that the Church is hierarchical, that is, it is governed by a 'sacred principle', the Holy Order, which has three tasks: teaching, sanctifying, and governing, otherwise the Church becomes something else. The Church is not synodal due to the fact that it gathers in a synod; moreover, the definition of 'conciliar Church' is already improper, because the Church is not a permanent council. The synod resembles the council in a small way, but unlike the council it is not, at least so far, deliberative, as it is only representative of the college of bishops. Only the pope with the united college of bishops can deliberate, because they are of divine institution. Moreover, the difference between the synod of bishops and the diocesan synod, which includes the laity, a bit like the synods of the Eastern Churches, is well known.

It is true, the Church is a social reality, a coetus fidelium according to St Thomas, and is not summed up or reduced to the hierarchy; indeed, the hierarchy must be characterised by an authentic humility and sense of justice; Holy Orders are great, but of a greatness at the service of the true worship that Christ renders to the Father in the Spirit. However, having said this, it seems that we want to find in synodality the solution to the current crisis, falling into self-referentiality, if we look at the rhetoric that characterizes so much literature on the subject: there are those who have said that the next synod will be the most important event after Vatican II.  The conclusion of the Instrumentum laboris, quoting Pope Francis, confesses: “We recall that the purpose of the Synod, and therefore of this consultation, is not to produce documents, but “to plant dreams, draw forth prophecies and visions” (n 32).

This appeal to dreams and the imaginary displays, on the one hand, a growing infantilism in the Church and, on the other hand, an ideological suspicion of reason and the intelligence of faith. Texts and analyses on the subject have the same characteristics: a supposedly driving voluntarism and a great weakness in doctrinal and historical roots. For the authors, the word "synodality" expresses the very mystery of the Church, in its fundamental reality, when in fact it only indicates a small part of the Church's institutional apparatus. One forgets that this is the mystical Body of Jesus Christ "distributed and communicated", as Bishop Bossuet said, the universal sacrament of salvation, that is at the same time the sign and the instrument of redemption, not a mega-group of co-responsibility and listening. Faith, above all, remains a personal and unique encounter with the Creator and Saviour.

At this point one wonders in what way synodality would be the guarantor, indeed the agent, of greater missionary effectiveness. In fact, it should be noted that there is a total absence of assessments of the different synodal experiences gained after the Council, both the universal ones (of which remain mostly the Apostolic Exhortations that followed)  and the diocesan ones (whose copies of the documents lie in oblivion); nor do we question their real missionary impact, such as the frequency of Mass and the sacrament of penance, the demand for baptisms, confirmations, anointing of the sick, and weddings, priestly and religious vocations, the renewal of spiritual movements and Catholic education and action, the strengthening of the Christian presence in the political and cultural worlds, in the social fabric, etc.).

If one concludes that the synodal assemblies have not constituted any visible and measurable missionary progress, other than the mere fact of coming together, one runs the risk of seeing them call for reforms that are absolutely necessary to revitalise the Christian fabric: priestly ordination of married men, female priesthood, democracy in deciding dogma and morals, transformation of existing councils into deliberative assemblies, in order to achieve another Church, favouring a de facto schism, even if not declared. So behind synodality, you find the same references that served to justify collegiality, in its time, and then communion (at least the studies of the 1960s that promoted revolution or reform in the Church were of a totally different kind!). It is the collapse of Catholic culture and a return to Babel. Now, with synodality, we go from tragedy to farce!