The mysterious pomegranate in the Holy Scriptures

Moses spoke of the pomegranate, but it is also found in the Song of Songs, and in Exodus it is even presented as a decorative fruit. Beautiful, unique, and delicious, it has inspired artists, poets, traditions and religions that see it as a source of both fertility and well-being. This is why it is included in so many recipes.

- THE RECIPE: RISOTTO WITH POMEGRANATE 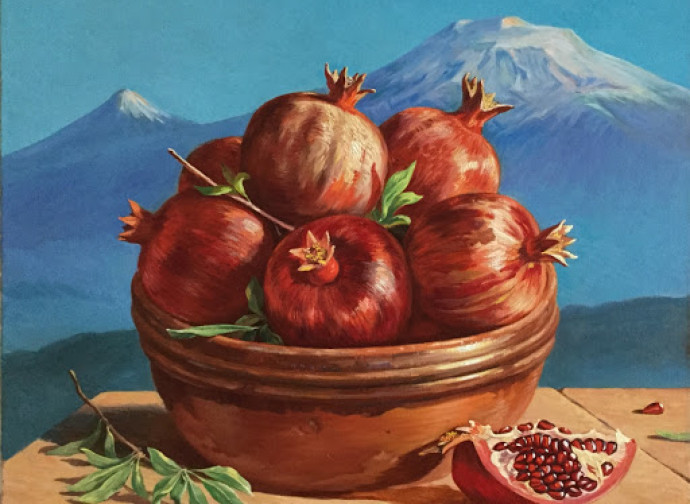 In the Bible, the pomegranate is mentioned for the first time when Moses sends two spies to the land of Canaan: “Then they came to the Valley of Eshcol, and there cut down a branch with one cluster of grapes; they carried it between two of them on a pole. They also brought some of the pomegranates and figs” (Numbers 13:23).

The fruit of the pomegranate is the fifth among the seven fruits mentioned as being produced in abundance in the Promised Land: the land given by God is rich… “a land of wheat and barley, of vines and fig trees and pomegranates, a land of olive oil and honey” (Deuteronomy 8:8).

Certainly this fruit of hidden beauty is mysterious in itself: intriguing in appearance, once opened it offers itself in all its splendour: the red, shiny grains, set in the padded golden heart of the fruit, begging to be extracted.

It is no coincidence that many civilisations have been fascinated by the fruit and have used it as a decorative element and as a source of inspiration for artists. Starting with the Bible itself, which presents it to us as a decorative element in two passages, one referring to the priests’ clothing and the other to architecture: “And upon its hem you shall make pomegranates of blue, purple, and scarlet, all around its hem, and bells of gold between them all around: a golden bell and a pomegranate, a golden bell and a pomegranate, upon the hem of the robe all around” is written in Exodus 28: 33-34. And: “So he made the pillars, and two rows of pomegranates above the network all around to cover the capitals that were on top; and thus he did for the other capital. The capitals which were on top of the pillars in the hall were in the shape of lilies, four cubits. The capitals on the two pillars also had pomegranates above, by the convex surface which was next to the network; and there were two hundred such pomegranates in rows on each of the capitals all around” (1Kings, 7:18-20).

A symbol of fertility and beauty, the pomegranate is also mentioned several times in the Song of Songs: “I would lead you, I would bring you into my mother's house; you would initiate me into the art of love. I would cause you to drink aromatic wine and juice of my pomegranate” (Song 8:2). Or: “Thy lips are like a scarlet thread, thy mouth is gracious; thy cheeks, behind thy veil, are like a piece of pomegranate” (Songs 4:3).

In fact, in many civilisations and traditions, the pomegranate is strongly linked to seduction and marriage, as the grains of the fruit recall abundance and fertility. Even today in Greece, it is customary to break a pomegranate during weddings, as a wish for numerous offspring. In Turkey, the bride throws the fruit to the ground and the seeds that fall out are an omen of the number of children she will have.

In Greek and Roman mythology the pomegranate is a forbidden fruit, a symbol of death and rebirth: it is represented by Persephone (or Proserpine), the daughter of Demeter and Zeus, who was kidnapped and married under false pretences by Hades (Pluto for the Romans), lord of the Underworld, and was punished and forced to live in Hell for six months of the year for having eaten six pomegranate seeds. In the Middle Ages it became a symbol of resurrection and began to appear in sacred paintings, and then developed during the Italian Renaissance as a decorative element in textiles, mosaics, architecture and especially in painting. The most representative painting is Sandro Botticelli's Madonna of the Pomegranate, a commissioned painting from 1487, now in the Uffizi Gallery in Florence.

Also from that period is the wonderful Portrait of a Young Lady with a Left Profile, attributed to Piero Benci, known as del Pollaiolo, a painting dating between 1470 and 1475, in which the lady depicted wears a precious dress embroidered with pomegranates.

In the 19th century, Dante Gabriel Rossetti painted numerous variants of the Portrait of Persephone, of which perhaps the eighth version is the most famous, executed in 1882 and it is part of the collection of the city of Birmingham.

In the present day, we note Rubik Kocharian and his Basket of Pomegranates, exhibited at the Armenian Museum in Fresno, California. And here we must add that Armenians are very familiar with the pomegranate, as it is the symbol of Armenia, a country of ancient Christianity, which considers itself “the Homeland of the Pomegranate” (in fact they have many recipes, sweet and savoury, based on pomegranates).

The Jewish people are also strongly linked to the symbolism of the pomegranate. The grains inside the fruit have different symbolisms: they represent the number of a person's virtues or, being 613, they correspond to the 613 commandments of the Torah. The pomegranate is also a symbol of brotherhood, abundance and prosperity. The Jewish liturgy, on the occasion of the feast of Rosh ha-shanah (ראש השנה לשנים) - New Year's Eve - provides for the consumption of certain symbolic foods, accompanied by prayers of good wishes for the New Year. Among these foods is the pomegranate, on which the blessing reads: 'May our merits be as numerous as the seeds of the pomegranate'.

In Europe, we find various dishes with pomegranate. In Hungary, a delicious salad of fennel, endive and pomegranate is an excellent starter. In Germany, roast goose with pomegranate sauce is a festive dish. In Romania, baked carp cooked with onion and dill stalks and served sprinkled with fresh pomegranate seeds. In Greece, the classic variant of Pligourisalata (bulgur salad with tomatoes, parsley, onion, olive oil and lemon juice) in ‘chic’ restaurants has been enriched with pomegranate. In France, they serve a champagne cocktail with pomegranate juice.

While in Italy, since the Renaissance, the pomegranate was used in cooking on a large scale. At the wedding of Beatrice d'Este and Ludovico Sforza (known as ‘il Moro’) on 29 December 1490, out of 87 dishes served to the guests, more than half had pomegranate juice, grains, fillings, jams or sauces in their ingredients. In contemporary Italian cuisine we find pomegranate-based pasta, risotto, fish, meat and desserts.

The pomegranate is used for religious rites, in festive recipes, as decoration for fabrics or architectural elements, in paintings and mosaics, and also as a medical remedy. Rich in antioxidant qualities (because it is full of vitamin C) and numerous phenols (including gallic acid, grenadine, punicacortein, punicafolin, punicalin, delphinidin and other ellagitannins that are particularly active against free radicals), the pomegranate fruit also contains punic acid, which is particularly effective as a breast cancer inhibitor. In addition to vitamin C, it is rich in vitamin K, and the B, A, and E vitamins.

All these are sufficient reasons not to be indifferent to this fruit, so rich in symbols, taste, and uses: nourishment for the spirit and the body, so masterfully described by Giosuè Carducci in his poem Pianto antico: L'albero a cui tendevi / la pargoletta mano, / il verde melograno / da' bei vermigli fior...

[Ancient Lament: The tree towards which / you stretched your infant hand / the green pomegranate / with its beautiful vermilion flowers...]