The murky links between Podemos and the Latin American socialist regimes

Funding, exchange of favours, consultancies, contacts and many ideological affinities: there is still much to discover about the connection (which exists and is evident) between Podemos, the Spanish left-wing party in government, and the socialist regimes in South America, especially with former President Morales in Bolivia. 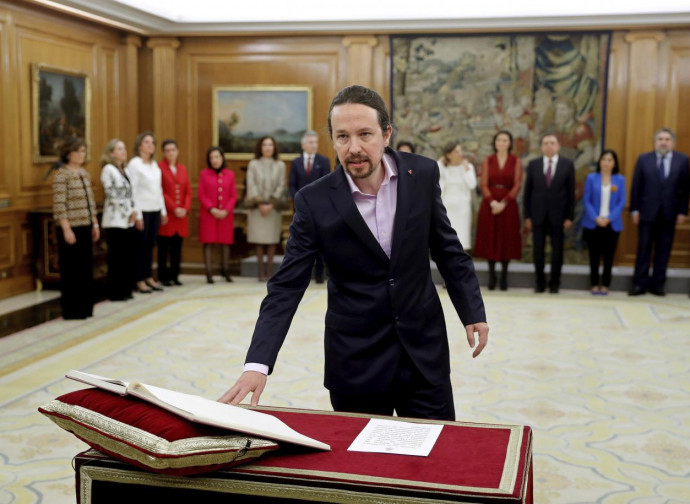 Cardinal Canizares had said this several times, the latest as recently as six days ago: the "new vision of reality" which the government of the Spanish Left will uphold, "is a risk for Spain". Nothing will be the same as before. The first decisions tragically confirm this, but there is also no shortage of scandals. Among the first decisions taken by the new Ministers and the Coalition Executive, the most leftist ministers in Spanish history, we must point out two.

The first was taken by the wife of the Leader of Podemos and current Vice President Iglesias, Irene Maria Montero, the Minister for Equality, who has recently appointed the two most influential leaders of the Spanish LGBTI movement, Bea and Boti, born Beatriz Gimeno and Boti Garcia Rodrigo, to two crucial institutional positions.

Gimeno is now in charge of the Institute for Women, while Garcia Rodrigo is the new Director of the Ministry for the new sector of 'sexual and LGBTI diversity'. Throughout Spain it is well known that both deem heterosexuality to be "a political tool to subjugate women", and men to be "oppressors", and have repeatedly expressed the hope that men will be "penetrated by women" to achieve real equality. I’m saying no more, but I leave it to you to imagine what equality the new Minister and her collaborators may promote. It is certainly disconcerting to have the umpteenth confirmation, from this new race of communist-populists, of an equality that, firstly, chooses the wives of the Leaders for prestigious positions, then gives responsibility to those who 'feel different' to standardise and repress those who are 'normal'.

The second choice was made by President Sanchez, confirmed by the Council of Ministers, concerning the nomination of the former Minister of Justice, the socialist and heir apparent of the Prime Minister, Dolores Delgado, to the position of Fiscal General, i.e. adviser to the country’s Attorney General. The fear and protests, both of the political parties and of the country's Judiciaries, following this political appointment, are based not only on the risk of 'politicisation' of judicial actions, but also on the well-founded suspicions that with this appointment Sanchez and Iglesias want to nip in the bud any possible troublesome investigation.

Yesterday's vote of the General Council of Judicial Power (constitutional body that safeguards the independence of the magistrates in the exercise of their duties), although not binding, chose not to consider the 'suitability' of the candidate Delgado, merely stating that the terms of the law had been respected by the Government. So, a Council split in two (7 against/12 in favour) did not approve her suitability, but only the procedure that selected her. Before entering politics, Delgado was a very close collaborator of the famous Spanish judge Baltazar Garzon, known for his investigations into the Spanish People’s Party, the crimes of 'Francoism' ... until in 2012 he was expelled from the Spanish judiciary for some serious irregularities and prevarications committed during certain investigations. Since then, and here we get to the point, Garzon has collaborated with the prosecutors of many Latin American countries and for some weeks now he has headed the team of lawyers who defend former President Morales from the many accusations made by the Bolivian government.

At present, as a result of the ongoing investigations in Bolivia into the Morales administration, the scandal of the funding sent by Morales and the Bolivian Government to associations closely linked with Podemos is widely reported in Spain. As the investigation continues, some disconcerting details have emerged: Morales and the Bolivian Central Bank in 2017 and 2018 paid 1.3 million dollars for 169 mini videos for social media (from 30 seconds to one minute) provided by Neurona Consulting, a company linked to Iglesias and Carlos Monedero. Monedero, a political scientist, is a leading exponent of Podemos and was a consultant to the Chavez Government from 2005 to 2010.

As mentioned earlier, in recent weeks the Attorney General's Office of Bolivia has called as witnesses in the investigation against Morales and his ministers three exponents and founders of Podemos: Iglesias, current Vice President of the Government, Monedero and Errejon (now Leader of a new Spanish Marxist and populist party). The suspicion is that the links between the regime of Morales and Podemos date back to 2014, when Morales himself publicly supported the political movement of Podemos, calling it, during a conference held in Rome, "the best hope for the Spanish brothers". The Attorney General's Office of Bolivia is not the only one investigating: last weekend it emerged that the Justice Department of Brazil and Venezuela are also investigating several events related to the funding received, directly or indirectly, by the Leaders of Podemos, Iglesias and Monedero.

The swearing in and appointment of the new ministers of the Spanish government have not calmed either the scandals or the Iberian opposition which, in recent days, has formally and in unison demanded that all the events concerning the funding received by Podemos from the Latin American 'regimes' be fully clarified. The concerns raised by the opposition and which are also making a breakthrough in Spanish public opinion, despite the silence of some aligned press, are manifold: what autonomy does Podemos have, with regard to regimes such as those of Morales and Maduro? Why was a talented collaborator of Garzon, who is also a socialist politician, appointed to the General Prosecutor's Office of the country? Is it possible that the Sanchez-Iglesias agreement includes the end of all judicial cooperation with the Latin American countries that are investigating the Leaders of Podemos? What is the real reason for Iglesias's ferocious attack, following Tuesday's first Council of Ministers, on the General Council of the Judiciary, an independent body similar to the Italian CSM, and the entire Spanish justice system on the events surrounding the Supreme Court's judgments against the Catalan secessionists?

And finally, a subject never really clarified: were the funds received over the years by the socialist countries of Nicaragua, Venezuela, Bolivia and Ecuador (perhaps from Iran) transparent and declared? Yesterday new documents emerged from the investigations in Bolivia and Venezuela, another 300,000 dollars from Morales and 17,000 documents (still to be analysed) on the links between Chavez and Podemos.

The Vox Party and its Leader Abascal, as a result of these new documents, few days ago filed a complaint with the Spanish Anti-Bribery and Corruption Bureau to start investigations as soon as possible and, if necessary, take action without delay. In the midst of the controversy over the anthropological, social and civil revolution that the Government and the Ministers of Sanchez are initiating, the scandal and the requests for clarification on the history and activity of Podemos and its 'revolutionary' leaders, opens a new front of dispute in Spanish politics and society. The umpteenth dark tunnel that, this time, Spanish society and many Latin American countries (Bolivia first and foremost) hope will be clarified as soon as possible.