The miracle of Nain as seen by Cranach the Younger

The raising of the son of the widow of Nain is one of Jesus' most sensational miracles. There are several paintings depicting it, including the splendid altarpiece by Cranach the Younger, which emphasises the power and uniqueness of the Son of God. 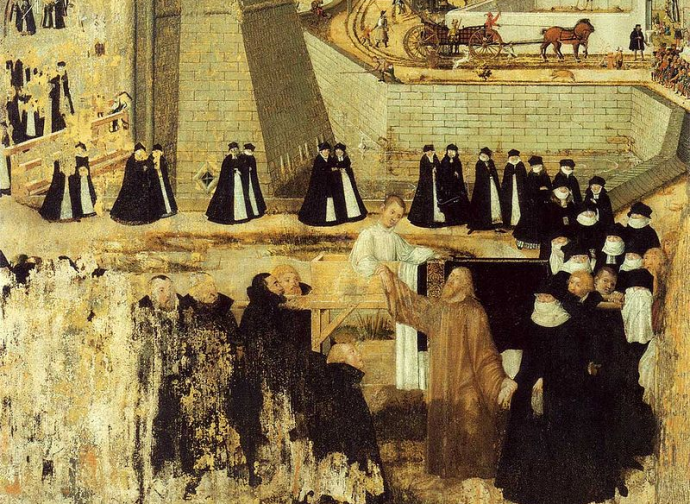 One of the most fascinating miracles of Jesus is the raising of the son of the widow of Nain, described by only one Gospel, that of Luke:

Now it happened, the day after, that He went into a city called Nain; and many of His disciples went with Him, and a large crowd. And when He came near the gate of the city, behold, a dead man was being carried out, the only son of his mother; and she was a widow. And a large crowd from the city was with her. When the Lord saw her, He had compassion on her and said to her, “Do not weep.” Then He came and touched the open coffin, and those who carried him stood still. And He said, “Young man, I say to you, arise.” So he who was dead sat up and began to speak. And He presented him to his mother. Then fear came upon all, and they glorified God, saying, “A great prophet has risen up among us”; and, “God has visited His people.” And this report about Him went throughout all Judea and all the surrounding region. (Lc 7, 11-17)

This miracle has been depicted by various artists: Jean-Baptiste Wicar (1830), Livio Orazio Valentini (1920), Lionello Spada (1612), Mario Minniti (1640) and others. But here we will examine the work dedicated to this miracle by the German artist Lucas Cranach the Younger. It is a magnificent altarpiece, located in the Church of St Mary in Wittenberg. 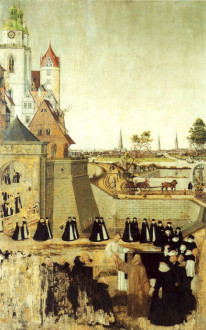 Lucas Cranach the Younger (Wittenberg, 4 October 1515 - Weimar, 25 January 1586) was the second son of another great artist, Lucas Cranach the Elder. His home town, Wittenberg, in Saxony, is prosperous and flourishing and offers the family the opportunity to live comfortably. The city is also famous for its close links with Martin Luther and the origins of the Protestant Reformation: many of its buildings, such as the castle church, are linked to the events of the time and are now on the UNESCO World Heritage list. Part of the Augustinian cloister in which Luther lived, first as a monk and later as an owner with his wife Catherine de Bore and his six children, is preserved and has been turned into a museum. It contains many of Luther's relics, as well as portraits and other paintings by the two Lucas Cranachs (father and son). The Augusteum, built between 1564 and 1583 for the presence of the monastery, is now a memorial.

In the work depicting the miracle of Nain, the artist succeeds in conveying the importance of the scene, the fact that in order to perform a miracle one must be the holder of a gift given through the power of God. Jesus is in the centre, with a raised blessing arm. He is surrounded by the crowd of the two processions as he brings the widow's son back to life. It is an extraordinary miracle, which emphasises the uniqueness of Jesus, the Son of God, endowed with exceptional powers. The resurrection of a mortal is an act of faith and hope in life after death, but also in the immortality of the soul.