For the “white man” to do the right thing when it comes to the rights of Africans is becoming increasingly difficult. Nancy Pelosi and other American Democrats wore the kente stole (West African tradition and symbol of African-American resurgence) as a tribute to the death of George Floyd. The Africans were outraged. 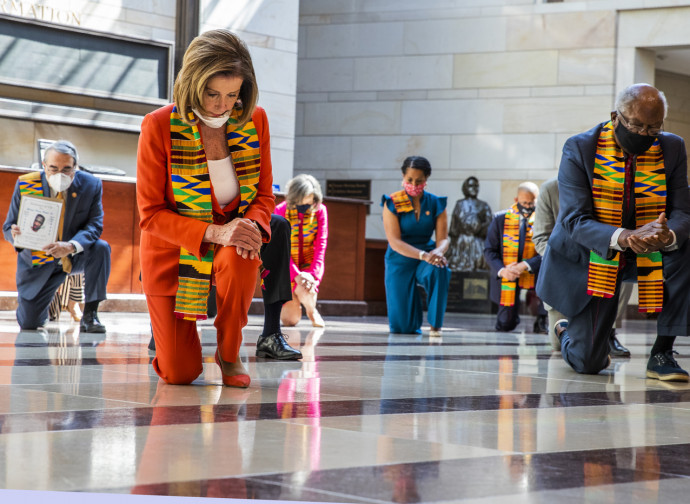 For the “white man” to do the right thing when it comes to the rights of Africans is becoming increasingly difficult. This is demonstrated once again by the case of the kente stoles, worn in the United States by Nancy Pelosi and other Democratic parliamentarians who paid tribute to George Floyd and protested against racial discrimination in the Emancipation Hall of the Capitol: on one knee and in silence for 8.46 minutes, the time Floyd was immobilized on the ground by a policeman kneeling on his neck.

Kente is a type of fabric made of strips of silk and cotton woven according to techniques handed down through the centuries by the artisans of the Akan and Ashanti kingdoms of Ghana. According to the foundation myths, it was two Akan friends who invented this type of fabric. They had gone into the forest to hunt, but they found a spider weaving its web. Fascinated, they stayed there for two days observing it and when they returned home they endeavoured to imitate it. Each of the 12 colours used has a meaning – for instance, peace and love are blue, wealth and fertility yellow, sacrificial rites and death red – as do the different ways in which the colours are combined according to ancient patterns. Traditionally, kente fabrics were reserved for the Ashanti royals and the most precious ones were the prerogative of the king, worn at ceremonies and rites. Even now that their use is more widespread, they are usually worn on special occasions, partly because the materials used and the craft techniques with which they are made render them expensive.

The kente cloth stoles that the Speaker of the House of Representatives Pelosi and other Democratic parliamentarians wore on their shoulders are a gift from the Congressional Black Caucus, the body made up of members of Congress formed in 1971 to discuss issues relating to the plight of African American citizens and promote their rights. “The kente fabric – the President of the Caucus, Karen Bass, member of the House of Representatives for California explained on June 8 during a press conference – represents our African heritage, our origins and expresses respect for the past. For those of you who do not share this heritage, wearing it is a sign of solidarity”.

Members of the Congressional Black Caucus have displayed kente stoles on several occasions: for example, in 2018, at President Donald Trump's State of the Union address, and in 2019, on the 400th anniversary of the arrival of African slaves in America. For years, black university students have used kente stoles to express pride in their African roots at graduation ceremonies and other occasions.

In fact, perhaps the stoles are now, according to many, a little “inflated” and have therefore at least partly lost their function as a symbol of resurgence and retaliation. But, this aside, as mentioned at the beginning, if Democratic parliamentarians thought they were earning unconditional admiration and gratitude – on one knee, in silence, head bent, and above all making themselves a symbol of African racial pride – they were wrong. Theirs was a rather questionable “sartorial choice” the BBC commented in an article on June 9. First of all, the result of their performance was that on the social media the buzz was all about the stoles, distracting attention from the message that was intended and should have been spread: “this is really not the time to learn the history of the kente fabric – we read in a tweet reported by the BBC – this too distracts from what really matters”.

“The kente stoles, for African Americans are a symbol of uprising – Francesco Malgaroli wrote in La Repubblica on June 10 – the Democrats wearing them has had another effect, bringing to mind echoes of colonialism”. To confirm this, he quoted Trevor Noah, a South African, black TV presenter, actor and comedian, very famous in America, who protested saying: “A lot of people were confused about why the Democrats wore an African cloth to talk about George Floyd and police brutality. It felt like they were trying too hard”.

Even more severe was the judgement of Nanjala Nyabola, a Kenyan writer and political analyst, according to whom the use that U.S. Democrats have made of kente cloth is an insult to Africans. Addressed to Pelosi and presumably to all whites like her as she commented: “Stop using Africans and African cultures as props to deflect criticism. We are not your props”.

At least Ghana could be assumed to appreciate the “sartorial choice” of the Democrats. Contacted in the Ghanaian capital Accra, the BBC correspondent commented that there were no major reactions in the country, but that in fact people are most likely happy that the international visibility of their kente cloth, thanks to the decision of the Democrats to wear it while the whole world looks to the United States and to them, has been very good publicity, useful in commercial terms.