The fish, symbol of Christ the Saviour

Besides being a source of nourishment, the fish is a symbol that recurs frequently in the Holy Scriptures. Early Christians used it as a sign of recognition to indicate the Saviour. It is no coincidence that Jesus makes much use of the metaphor of fishing in his discourses. And in the figure of Peter, one of the fishermen Apostles and the first Pope, we can see the link between Christ and believers.

- THE RECIPE: BAKED SAINT PETER’S FISH WITH OLIVES AND FENNEL 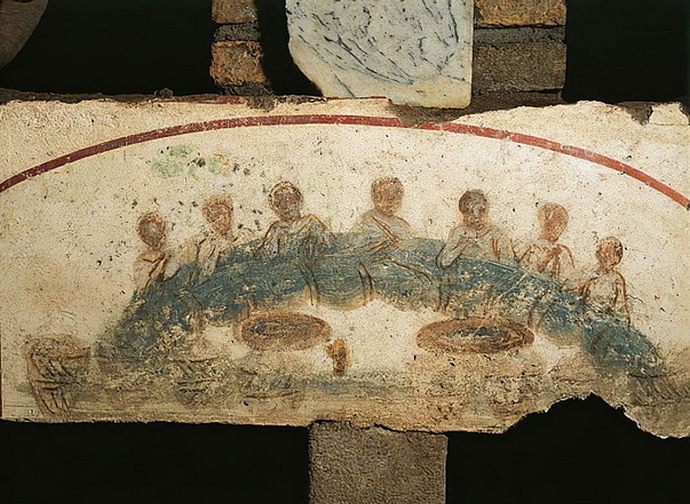 Fish is a food that carries many meanings in the Bible. As well as being a source of nourishment, it is also a Christological symbol and therefore a symbol of recognition.

The aspect of the fish as a secret symbol of recognition used by the early Christians is explained by St Augustine in De Civitate Dei (XVIII, 23): “If you combine the first letters of the five Greek words that are ‘Ιησοῦς Χριστός Θεoῦ Υἱός Σωτήρ’, and mean Jesus Christ the Son of God the Saviour, you will have ΙΧΘΥΣ, that is, fish, a term with which Christ is symbolically represented because he had the power to remain alive, that is, without sin, in the abyss of our mortality, similar to the depth of the waters”.

In the Roman catacombs of St Callistus, St Domitilla, and St Sebastian, and in the Neapolitan catacombs of St Januarius, St Eusebius and St Vitus, the symbol of the fish is always present, appearing in inscriptions on tombstones or frescoes. The same symbol is depicted in mosaics in the first Christian basilicas, therefore in the years following the Edict of Constantine in 313.

Jesus makes much use of fish and fishing in his teachings, because in the ancient world fish was a staple food and fishing a common occupation: of His twelve apostles, seven were probably fishermen. The profession of fishermen, which was their livelihood, became a symbol for their new vocation to spread the good news of salvation.

An interesting key to understanding this is the figure of Peter, a fisherman (the Gospels present him as such in several episodes, including the miraculous catch in Luke 5, 1-11, and the call of the first disciples in Matthew 4, 18-22 and Mark 1, 16-20), whom we can consider as the link between Christ and believers. The phrase ‘Jesus Christ Son of God the Saviour’, encapsulated as we have seen in the Greek acronym for ‘fish’, is already signified by the words spoken by Peter in his Confession, before he was in fact appointed the first Pope of the Church:

The link between the figure of Peter and the symbolism of the fish does not end with this verse, but is present in other episodes. In addition to those mentioned above, Peter witnessed, together with the disciples, the phenomenon of the multiplication of the loaves and fishes (John 6:1-14). Moreover, in some representations of the Last Supper (as in the fresco in the Catacombs of St Callistus) bread is replaced by fish (picture above).

Interestingly, no fish is mentioned by name either in the Old or the New Testament, yet the generic word fish is mentioned 49 times. A good example of fish symbolism is the Book of Jonah, which describes the rescue of the rebellious prophet from drowning in the stormy sea when God sent a ‘great fish’ to swallow him. Beyond the historical account, the great fish also represents an image of God’s deliverance and mercy. The story clearly shows that the fish was Jonah’s means of salvation. It was also a sign of the greater salvation offered through Christ. Jesus recalled the story of Jonah in his confrontation with the Pharisees and symbolically connected the three days and nights that Jonah spent in the fish with the time that would elapse between his crucifixion and resurrection (Matthew 12: 38-42).

In the Old Testament, the image of the fish is sometimes linked to the uncertainty of life: “For man also does know his hour: like fish taken in a cruel net, like birds caught in a snare, so the sons of men are snared in an evil time, when it falls suddenly upon them” (Ecclesiastes 9:12).

The fish and the nets to catch them are also often used by the prophets to symbolise God's judgement on Israel’s enemies (Ezekiel 26:5, 26:14; 29:3-7) or on the rebellion of the Israelites, which in particular results in their foreign captivity (Amos 4:2; Habakkuk 1:1-17). In this case, God is the fisherman who gathers men, like the fisherman who gathers fish, for judgment or blessing.

A curiosity is offered by the Gospel of Matthew, which describes the fish as payment for the temple tax that Jesus has to pay:

“When they had come to Capernaum, the temple tax collectors approached Peter and said to him, ‘Does your teacher not pay the temple tax?’ He replied, ‘Yes’. As he was entering the house, Jesus confronted him, saying, ‘What is it to you, Simon? From whom do the kings of this land collect taxes and tributes? From their own sons or from others?’ He answered, ‘From strangers.’ And Jesus said, ‘So the sons are exempt. But lest they be scandalised, go to the sea, cast a hook and the first fish that comes along, catch it, open its mouth and you will find a silver coin there. Take it and give it to them for Me and for you” (Matthew 17:24-27).

Finally, with regard to fish as food, in biblical times (as well as today in Jewish cooking) it was divided into pure (those with scales and fins) and impure (the crustaceans, molluscs, shellfish, eels). It was prepared simply, grilled, boiled, or stewed, with olives and lemon or with onion sauce. It was served at all meals (even in the morning, in the form of morsels made from strips of fish rolled up and seasoned with lemon).

Lake Tiberias was the main source of fishing and provided not only tilapia, which was often eaten grilled, but also the fish that is the basis of a classic Israeli recipe known throughout the world: carp. But this lake is still very rich in fish and perhaps the fish found here today are the same as those found in the miraculous catch. The lake does not have a unique and definite name, but has taken several names from the most important places that stood on its shores. In the Old Testament it is called the Sea of Kinneret (a name derived from the Hebrew word kinnor, meaning harp) because of its peculiar shape; in the time of the Maccabees and in the New Testament it is generally called Genesaret Sea or Lake after the plain bordering it to the northwest. The lake was also known as the Sea of Galilee; today it is commonly called Lake Tiberias after the town of the same name on its shores.

Nowadays, a highly prized fish caught in this lake is the St Peter’s fish. In 2010, the Israeli government banned fishing for St Peter’s for two years to repopulate the lake, and today this delicious fish is being caught here again. Lake Tiberias, some twenty-two kilometres long (north to south) and thirteen and a half kilometres wide (west to east), is Israel's main reservoir of fresh water.

The Jordan River was, in those days, another source of fish: carp, trout, catfish, sculpin (see photo, generally unknown), are some of the species. A small curiosity: even today, the water of the Jordan River is used for the baptism of the future kings of England (and also of their children). This river has several tributaries and flows into the Dead Sea. All the fish that come to the Dead Sea, by swimming down the Jordan River, are doomed to die when they reach such salty waters: but they often turn back as soon as they get close, because they sense the danger of death. In the Dead Sea nothing can live, or almost nothing: only highly ‘specialised’ creatures such as red archaebacteria and green algae find a home there.

In Jesus’ day, people ate grilled carp, trout with cinnamon, perch with onions, tilapia with lemon, catfish stuffed with olives, snapper wrapped in vine leaves, etc. When we travel to Rome, it is worth going to the Ghetto, where several restaurants offer dishes that take us back to biblical times. But despite that, we can go back in our minds to that time by reflecting on these words from the Old Testament: “I have seen even under the sun, that the race is not to the swift, nor the battle to the strong, nor bread to the wise, nor riches to the men of understanding, nor favour to men of skill, but time and chance come upon all.” (Ecclesiastes 9:11).