Faithful and seminarians of the San Rafael Dioccese have protested the prohibition of receiving Communion on the tongue. After a Rosary was interrupted by police, the local bishop closed the diocese’s model seminary with 39 seminarians and more than 150 families associated with the institution, all active Catholics in a region called the “Vendée of the Andes” where Christianity is lived according to the Benedict Option. This is why it is suspected that the moment was exploited to close a thriving community filled with vocations and one which is "too Catholic" for our times. 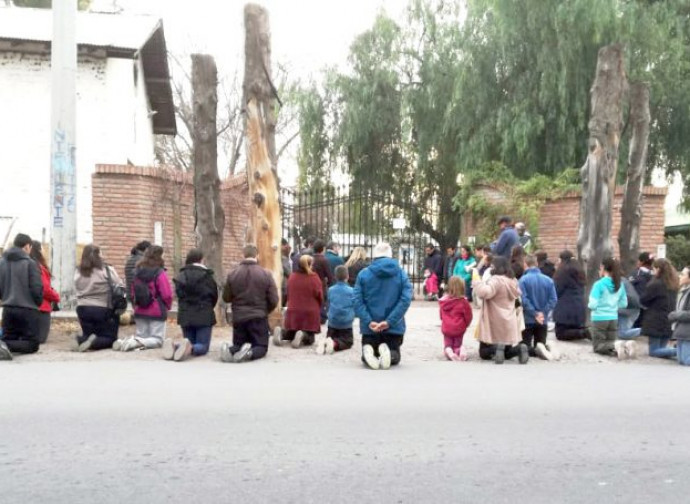 The obligation of receiving communion in the hand is literally getting out of hand. In Argentina it even led to the closure of a seminary. And it was not just any Catholic seminary, but real “manna in a desert”  of vocations which has also deeply affected Argentina.

In San Rafael, a small diocese of the metropolitan ecclesiastical region of Mendoza, Bishop Eduardo María Taussig was categorical in his decision: he had had enough of his faithfuls’ protests about receiving communion in the hand and the polemics from seminary priests and many seminarians (39 future priests - an incredible  number for a diocese of just 230,000 inhabitants).

Following protests and subsequent requests to the bishop, especially after rosaries were recited in front of the seminary’s front doors, Biship Taussig decided to close the institution  by the end of the academic year, which is December in Argentina.

This was a decidedly drastic and unjustified measure in the face of legitimate petitions from faithful and clergy, which were in line with the tradition of the Church and which deserved further answers.

The pandemic panic is slowly changing the Church. Indeed, it is shedding light on a Church that is not at all attentive to her faithful, but very eager to submit to the authority of governments.

Of course, with his decision to close the seminary, the bishop placed a heavy burden on a thriving community of families who, by relying on the seminary, lived out an atmosphere of a Catholicism that today might be called fundamentalist, but which in reality is only a form of Catholicism which has not sold out to secular worldliness.

Those who know this community call it the "Vendée of the Andes", where families, thanks to the seminary priests, imbibe Catholic apologetics. They, by no means, are inclined to make compromises contemporary viewpoints on the faith, which are fairly fluid, not to mention soft. Their community represents a small and thriving Benedict Option, if you will.

It is reasonable to think that the mandate to receive communion in the hand would not have been well accepted and that sooner or later would have led to clashes, but no one would have ever imagined that it would have gone this far.

Of course, it is not a nice thing to see faithful protesting, but that they are protesting for a right which, in this case and for too long, in Italy as in Argentina, is suspended indefinitely

On July 5, around 500 faithful from 150 families in the diocese had gathered to pray in front of the religious complex on Avenida Tirasso while petitioning restoration of receiving communion on the tongue. The police came and intervened. Prosecutor Fabricio Sidoti accused the organizer of having violated health measures and of breaking article 205 of the penal code (an offense with a 6 month-2 year of prison term for unlawful disease spreading).

The faithful had written to the bishop and reminded him of what happened in the Diocese of San Luis, where newly ordained bishop Gabriel Barba administered communion on the tongue during in his first Mass. This is the same diocese where in 1996 the possibility of distributing communion in the hand was permissible, but the then bishop Juan Rudolfo Laise refused to adhere to the new protocol. We now see that certain decisions eventually led to this communion distribution policy taking root.

The faithful and priests reiterated to the San Rafael bishop that "their disobedience is not to the Church which allows the faithful to receive communion both on the tongue and in the hand. It more about defending a right that cannot be denied to them. And there are ways to meet health rules without undermining that right."

But the bishop was unbending. He replied with harsh words and closed the seminary, evidently considering it a dangerous centre of indoctrination. And now the community is in shock.

Because of the “indoctrination” of some priests, as mentioned in a recently released video, Bishop Taussig gives his justifications to continue with communion in the hand while defending the concept of a "common feeling" and explaining what Canon 843 means by the “opportune way to receive Communion.”  “The opportunity is given according to conditions of time and place.” He  referred to the  Italian Bishops’ Conference as a model, which even signed a protocol agreement with the government. It is a protocol, however, as we have already noted, which does not foresee the obligation of administering communion in the hand.

For their part, the faithful responded citing Redemptionis Sacramentum, the ecclesial instruction in which it is reaffirmed that faithful who wish to receive communion on the tongue cannot be refused and that it remains the ordinary form of receiving the Eucharist.

The decision is a wound in the ecclesial body and it cannot be otherwise, Bishop Taussig also said that he had made this serious decision in agreement with the Holy See. Could it be really true?

Certainly, when in the 1960s some rebel dioceses first distributed communion in the hand in violation of Church law, the pope, in an attempt to reach out to them and only to them, wrote a pardon in Memoriale Domini. It, thus, became legitimate disobedience.

Mutatis mutandis, what chance is there, none in the face of another form legitimate disobedience that someone might intervene for the faithful this time around? Will someone ask for a pardon in order to be able to do what until a few months ago has always been permitted? This is unlikely: the question of ordering communion distribution in the hand and without any term limit goes right to the very heart of libertas eccleasie. And the Church today is no longer inclined to strike agreements with faithful who are seeking to claim their rights. They just get beaten and punished for being "too Catholic."

Update:
On 30 July, after reading this article, Archbishop Carlo Maria Viganò wanted to express his disappointment of this news by writing to the bishop of San Rafael. Viganò also sent a letter to the Daily Compass saying he felt "confused and hurt".

"I can understand your disappointment in seeing that, despite the pounding work of ultra-modernist indoctrination and pushed through in recent decades, there are still some good priests and clerics who do not put courtesan obedience before due respect for the Blessed

Sacrament", said Viganò adding his words of reproach for the bishop. "Your Excellency allow me to point out a certain inconsistency in your behavior with the motto you have chosen for your coat of arms: Paterna atque fraterna charitate. I see nothing paternal in punishing priests who do not want to desecrate the Eucharist, nor any form of true charity for those who have disobeyed an inadmissible order."

Then referring to the Swiss case of women who "celebrate Mass", he said: "I wonder if Bishop Felix Gmür will distinguish himself with the same zeal that animated you, and whether he will resort to the Roman Dicasteries to have the staged sacrilege punished in an exemplary way." He concluded by stating: "We all pray for the seminarians and for the faithful of San Rafael on whom you, Your Excellency, have declared war."