The equivocal “Sons of Abraham”

It is right to invite the three religions to collaborate for development and peace, but it isn’t to try and make a new religion of the Sons of Abraham. Yet, this is precisely the risk that Pope Francis ran with the approach he took in Ur. 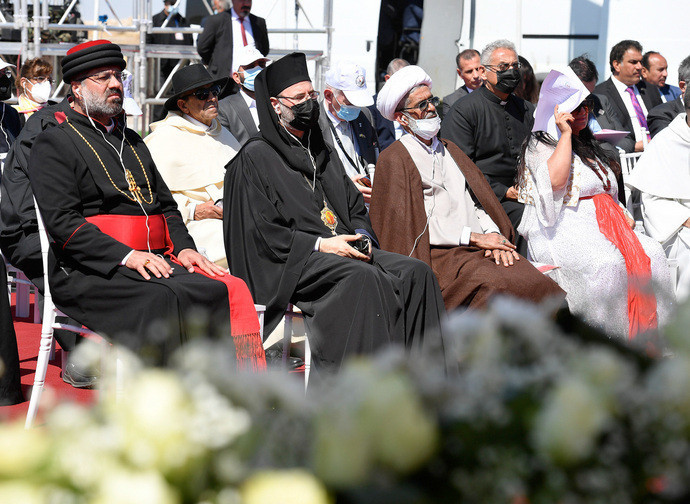 We knew before, and we know now, that Pope Francis' trip to Iraq would be, and was, fraught with dangers. There are many controversial issues, many open-wounds, many political and religious interests at stake. It was known and is known, therefore, that his interventions should have taken into account the delicate situation, with its exposed nerves potentially explosive. On some subjects it would have been better for him to remain silent, on others to use more suitable words, on still others only to mention and, finally, to speak clearly or even very clearly about others. There is no doubt that this is a very "political" journey. It is not surprising, therefore, that in the opinion of some on some subjects, he could have expressed himself better while in the opinion of others, the pope did well to speak as he did.

Having specified that the expectations of this trip, for the aforementioned reasons, required adaptation to the concrete situation, a problem remains unresolved, connected with the trip to Iraq which is of much higher relevance. A theme which this visit will influence greatly also in the future. This is inter religious dialogue.

In a complex situation such as Iraq, the need to talk about collaboration is understandable  and, above all, collaboration between religions, with particular reference to the Christian, Jewish and Muslim religions. In an explosive climate like that in Iraq, there is a need to pour oil on troubled water, not to fuel the flames. It is therefore understandable that the Pope presented himself as a messenger of peace and fraternal coexistence, who wanted to extinguish tensions and hatred and sow hope.

Yet, we should also ask ourselves whether such a discourse of peace and collaboration should go so far as to eliminate the distinction between the three religions and indicate the path of inter religious dialogue in such questionable ways. If the situation in Iraq calls for collaboration at a human and social level by the three most represented and most representative religions, there is no need to present the three religions uniform as if they were one: "the religion of the Sons of Abraham" .

Yet, this is what took place during the visit to Iraq and especially at the Plain of Ur. It gives the impression there was a deliberate intention to force, by pressing the accelerator, the theme of unity between the Abrahamic religions, while the Country only needed human cooperation for reconstruction.

In more synthetic terms: those who live in Iraq - and above all the faithful of the three religions - Christian, Jewish and Muslim - can collaborate for peace, order, development even without praying together to the same God as "Sons of Abraham". But, this is what Pope Francis proposed at the end of his speech in the Plain of Ur: a prayer to be prayed together as all children of Abraham. This unsolicited leap goes beyond the need for peaceful coexistence and the Iraqi situation seems to provide the opportunity to aim for something else.

The expression "Sons of Abraham", as well as that on the "religions of the Book", are devoid of content, they are only figures of speech . The three religions in question have three very different visions of Abraham, as they have of the Book. And this is the case because they are three profoundly different religions, and not only for mere details. Pope Francis rightly praised the coexistence of the three religions in Iraq before the recent tragic events, but that coexistence was precisely between different religions that do not need to become a single religion to coexist, such as the expression "Sons of Abraham" and the prayer drawn up by the Pope suggest.

In his speech in the Plain of Ur, Francis said that "if we want to preserve fraternity, we must not lose sight of Heaven". It is true that "man is not omnipotent", that "we cannot make it on our own" and that "if we exclude God, we end up worshiping the things of this earth", but this reference to Heaven, expressed in such a way that it works well for all, is empty, faceless, generic and therefore insignificant. The vision of those who live in Heaven is very different for the three confessions and also the precepts of love and brotherhood, which Francis attributes to the "true religiosity" of the Sons of Abraham, also differ somewhat from each other.

Collaboration on the human and social level between different religions is difficult in itself. This is because the themes of peace or justice are not neutral with respect to the ultimate religious references. However, given the difficult situation in Iraq, emphasising these aspects would have been improvident. Benedict XVI already did this in Regensburg and was made to regret it. Therefore a proposal of acceptance, respect and collaboration against violence and injustice in Iraq is more than enough.

What’s the point of pushing towards a non-existent Abrahamic religious unity, if not for reasons that have little to do with the difficulties of Iraq today and that perhaps concern more the inside of the Catholic Church than the outside, with few possibilities of being truly welcomed by others?