The Discernment needed to judge chastisement and conversion

The phenomenon of the coronavirus has provoked considerable online discussion on the theme of the chastisement of God, to which prophecies have been associated and examples of saintly bishops. How are we to judge this matter? By means of a true discernment, which seeks conversion, by using two factors: the exercise of the episcopal ministry as a depository of “charism certain of the truth” and the recognition by the faithful of the holiness of their bishops. Today something similar would not be possible with regard to Covid-19 because if a diocesan bishop spoke like Gregory the Great or Charles Borromeo he would end up in the media grinder. And so if there are chastisements, we bring them to Christ to ask that His wounds heal us, not only from our sins but also from Covid-19. 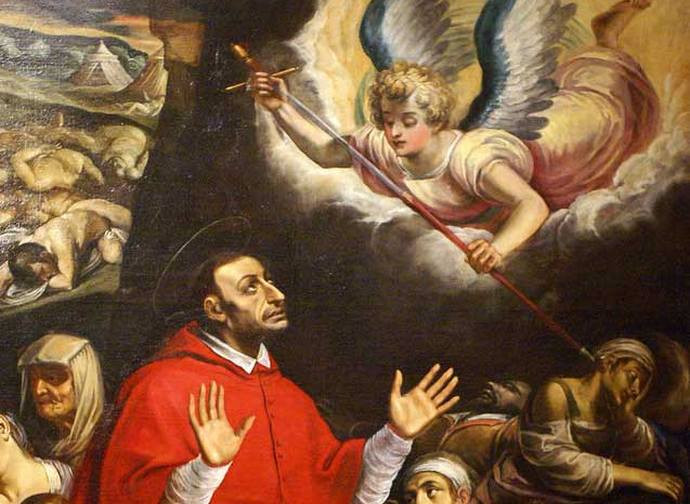 After considering Sacred Scripture (see articles here and here), we have sought to reach an understanding of divine chastisements in harmony with the nature of God and mankind. We will now venture to make a final and concrete reflection.

1. Welcome and respect all of Scripture

The books of the Bible are “written under the inspiration of the Holy Spirit and have God for their author” (CCC 105; cf 2Tm 3,16), and with Jesus and the Scriptures that speak of Him Revelation is complete. As a result, whatever comes after this is neither revealed or inspired.

Relative to our discussion, this means that when Scripture declares a relationship between sin and a calamity or an illness or death itself, it is inspired by the Holy Spirit, while with whatever follows [in the Tradition] it is not possible to affirm such a relationship with the same certainty and guarantee.

2. What happens after the Scriptures?

“Even if Revelation is already complete, it has not been made completely explicit; it remains for Christian faith gradually to grasp its full significance over the course of the centuries” (CCC 66). The Church is not bound to repeat only the stories of the Bible, but she can read the present in the light of the Bible in the precise sense of “making explicit” -  indeed she is bound to do this.

Relative to our question this means that, without the certainty of inspiration and revelation, a discernment is possible that sees a relation between a sin or a series of sins and a suffering – for example Covid-19 – in terms of a medicinal chastisement of God. Since there are two possibilities of either a relationship or a non-relationship between suffering and sin, and since we are no longer in the time of inspiration and revelation, no one is obliged to accept this discernment, but no one can condemn it without erroneously accepting the validity of an extreme interpretation: “no chastisement is sent by God because of sins.”

This discernment takes place by means of reflection and study on the part of believers, the deep understanding that they acquire of spiritual things, the preaching of pastors (cf. CCC 94), by which discerning that a certain suffering is a chastisement of God requires a certain spiritual depth and a “harmony” with divine things: nobody can invent it!

As an example of the need for such discernment, the present Covid-19 crisis has caused certain Marian prophecies and the words of saintly pastors of old to circulate on the internet. It is appropriate to consider them.

3. Prophetic revelations on Covid-19
At the beginning of the twentieth century, Luisa Piccarreta († 1947), hearing the words of Jesus himself, saw two fires that united together, one in China and the other in Italy. On September 28, 2019, the Blessed Mother appeared at Trevignano Romano and spoke of a virus coming from China. In Brazil, in the messages of Anguera, Our Lady specified that the virus was man-made. Messages are also coming from Medjugorje about calamitous and satanic times, interpreted in the sense of Covid-19, but the text does not explicitly mention the virus.

How should we respond to these sort of messages, which often cause anxiety and fear because of a certain type of fatalism: “it has already been written and so it cannot fail to happen”?

Apart from the fact that verifying such messages is no easy task, the criterion formulated by Cardinal Joseph Ratzinger concerning the “prophecies” of Fatima remains valid: The purpose of the vision is not to show a film of an irrevocably fixed future. Its meaning is exactly the opposite: it is meant to mobilise the forces of change in the right direction” (Theological comment of June 26, 2000 in EV 19/1015). Ratzinger continued, “God remains immeasurable, and is the light which surpasses every vision of ours. […] The future appears only “in a mirror dimly” (1 Cor 13:12)” (ibid., 1016). Thus, rather than describing the future in detail, the messages about Covid-19 remain an invitation calling to conversion. If they are too precise, perhaps they become suspicious.

4. The words and actions of holy pastors in the epidemics of their time

Historical considerations of the reactions of holy pastors in the face of the epidemics of their times are also circulating online. Roberto de Mattei has written on Saint Gregory the Great († 604) and on Saint Charles Borromeo († 1584), and I would also point out an appreciable contribution by Ermes Dovico. These are not aseptic reconstructions, but they intend to contrast these holy pastors with today’s pastors, who, apart from making interventions on television or online, are not calling for public prayers with the physical presence of the faithful and, above all, in marked difference from these sainted bishops, they are not intepreting Covid-19 as a chastisement of God. Roberto de Mattei is explicit on this point, and after recalling the words of Saint Gregory the Great on “terrible events” which are “foreshadowings of future wrath,” he concludes: “These are the words which the Church needs today, not words about the dream of a ‘happy Amazon.’”

How should we react? In order to be saints today should we do the same thing? Apart from the fact that Covid-19 has overshadowed the “dream of a happy Amazon” for now because there are other things to talk about, the saintly pastors in question had a relationship with the “civitas” that was much more intense than any present bishop. Saint Charles Borromeo enjoyed an exceptional moral authority, which was also a result of the fact that the rulers of Milan fled from the city out of fear. Saint Gregory the Great lived after the fall of the Western Roman Empire – the last emperor Romulus Augustus was deposed in 476 and Gregory died in 604 – and as a result the popes were strengthened in their civil role as authoritative and reliable figures. Both of these bishops were able to mobilise the urban populations of their respective cities, something that would be a much more complicated undertaking for any Italian bishop today, also because of the fact that we have a much more precise knowledge about how contagious diseases are transmitted.

I do not intend to dwell on civic and historical matters, but rather on the way these two saintly bishops interpreted the plague as a chastisement of God for the sins of the people. Now, as a consequence of what I explained above, their discernment is neither revealed nor inspired and thus does not require assent, and one is free to think otherwise. But at the same time it cannot be dismissed as false or inappropriate, because it is both legitimate and possible and also “according to the Scriptures.”

Indeed, what was precious in the discernment of those holy bishops was the fact that their discernment was welcomed by the people of God. Why? Because two things that are decisive criteria were verified. First, the discernment was presented as an exercise of the episcopal ministry, which is the depository of “a charism of certain truth” (CCC 94), and second, there was the recognition of the holiness of their bishops by the faithful. It was the union of these two factors that made the discernment not only acceptable but also constructive in terms of bringing about conversion of life and freedom from the plague.

Why is something similar regarding Covid-19 not possible today? Perhaps it would be possible, but it would not be normal, because a bishop of an important diocese who would speak like Gregory the Great or Charles Borromeo would end up in the media grinder. Instead, it should be obvious that a holy bishop would take this position, obviously without imposing it on others. On the one hand there are presuppositions such as injustices , sins against life and the Creator’s plan of orderly affectivity (sins that are not only committed but actually protected by the law), the desolation of empty churches that recalls God’s hiding His face from his people, a desolation that is not replaceable with a TV or computer screen (even if this is better than nothing and it is a grace that these exist). On the other hand, a similar discernment would break up today’s pastoral monody and bring about a more appropriate polyphony. And what’s more, it would ignite intercessory prayer. But I realise that maybe this is just a dream.

5. Man does not live on chastisements alone
This is true, not chastisements alone and always. At times there is sin without chastisements, but the Scriptures warn us: “Do not say, ‘I have sinned, and what happened to me?’” (Sirach 5:4). The ideal thing is not to live in the fear of chastisements, but rather to not sin because one is convinced, indeed because one lives in love where “there is no fear [...] because fear has to do with punishment” (1 Jn 4:18). Paragraph 2090 of the Catechism of the Catholic Church speaks of “the fear of offending God’s love and of incurring punishment.”

There is the confidence brought by the Scripture that, using a human image, says that “the Lord repented of this evil and said to the angel devastating the people: Enough now! Stay your hand!” (2 Sam 24:16). Why couldn’t the same happen for Covid-19 after our prayers?

God does not only punish, he also consoles, because he is “the God of perseverance and consolation” (Rom 15:4), the one who “consoles us in all of our tribulation (2 Cor 1:4), so that for us it is now “the time of consolation” (Acts 3:20). In Turin the “Madonna Consolata” is venerated, because she was the first one to receive the consolation of the New Covenant: in these times of anguish, fear, and uncertainty, we ask from her the grace of consolation.

Through Jesus we are in the love of the Father (cf. Jn 14:21, 17:26), a grace that frees us from the oppression brought on by punishment.

In any case, Jesus is the “slave” whom we “thought of as stricken, as one smitten by God and afflicted [...].Upon him was the chastisement that makes us whole, and by his wounds we have been healed” (Is 53:4-5; cf. 1 Pt 2:24). If there are punishments, we carry them in Him, and why not ask that His wounds heal us, not only from our sins but also from Covid-19?

Finally, the Holy Spirit is not only “like a wind” (Acts 2:2) but it is also the light breath of Jesus, who in showing Himself to his disciples “breathed on them and said to them: Receive the Holy Spirit” (John 20:22). In these times of Covid-19 – whether we are truly sick or only anxious – we ask for the gift of the Holy Spirit and the grace to “breathe” in all senses with His light breath.

We must live first of all on these riches and not only on chastisements, even if it has been useful to consider them.