The Chinese martyrs will be our judges

Today the Church celebrates the 120 Chinese martyrs: bishops, priests, nuns, lay people. An awkward story for those today, who have overturned the values at stake to indicate compromise rather than martyrdom as a model. Moreover, what happens in the relationship between the Holy See and China concerns each one of us. 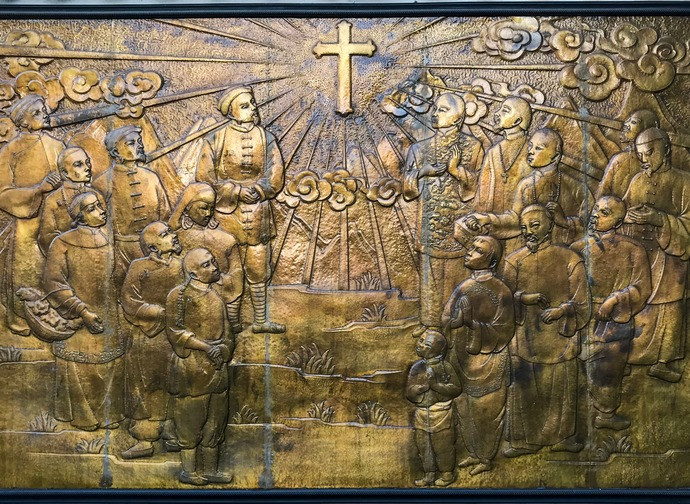 The liturgical celebration of the holy martyrs of China that occurs today, provides a  good opportunity to better understand the abysmal distance that separates the current pontificate from the previous ones - in particular that of St. John Paul II - regarding the Church in China and how to engage with the government of Beijing.

The only common ground that stands comparison, is the attention paid to Chinese Catholics and the desire to travel to that country. In 1982, the year Saint John Paul II wrote his letter about Chinese Catholics, he said that "concern for the Church in China has become the constant and specific anxiety of my pontificate". The same could be said for Pope Francis. But on the content and procedures adopted to pursue this goal and express this concern, they could not be more distant from each other.

Let’s consider the martyrs that are celebrated today: 120 bishops, priests, nuns, lay people (there were also 33 missionaries) were killed out of hatred towards the faith in different periods, between 1648 and 1930. Beatified at various times, they were canonized together on 1st October 2000 by Saint John Paul II during the great Jubilee. "Since Catholicism was introduced to China and later in all stages of its history," wrote a Chinese blogger priest two years ago commemorating the 120 martyrs, "there have been faithful who have sacrificed themselves for their faith. They had nothing special (...), and certainly were not super-beings made of steel (...). They weren't even wise or shrewd people. Human nature composes the ordinary, shy, self-concerned, the cowardly. But, they did not renounce their faith in the face of persecution or threats, and would never betray the Lord. They were forced into exile and even kept behind bars. They resisted all sorts of temptations sometimes with fear and apprehension because they believed in the great promise of the Lord Jesus”. It’s the same experience that Catholics of the "underground" Church have endured in the last few decades. They have paid with every sort of persecution and discrimination for their loyalty to the Catholic Church and their determination not to bow to the Communist Party plan that created the Association Patriotic Chinese Catholics (APCC), with the aim of bridling religious sentiment in a national Church controlled by the Party.

Although his aim was the unity of Chinese Catholics, it was to this "underground" Church that St. John Paul II looked to as the model, to the point that at the first consistory, in 1979, he appointed "in pectore" Ignatius Kung Pinmei as the archbishop of Shanghai, whose imprisonment at that time counted 24 long years. Eventually Kung was released in 1985, after 30 years in prison, and only in 1991 his cardinalate was made known and he was able to go to Rome to embrace the Pope.

Today, however, it is clear that the preferential choice has become the Patriotic Association and the way of keeping the Church alive is by making agreements with the ruling power, even when you know that the real purpose of that power is to eliminate the Church. A striking example of this is what the bishop emeritus of Hong Kong, Cardinal Jospeh Zen Ke-kiun, defined in recent days as the second act of murder (out of three) against the Chinese Church by the Holy See: the legitimacy, last year, of seven "excommunicated" bishops, illegitimately ordained by the Patriotic Association, to which some dioceses have also been entrusted by inviting the legitimate "clandestine" bishops to step down.

In short, martyrdom is not really necessary, it’s much better to find some way to reach an agreement. And those extraordinary testimonies that we hear and read on the occasion of the canonization of the Chinese Martyrs, October 2000, which are so reminiscent of the acts of the martyrs of the first centuries, today are a nuisance, the sign of rigidity that builds walls instead of bridges.

As for the modalities, just look back at the endless controversies and threats the Chinese government subjected Saint John Paul II to and the Church of Rome, precisely for those canonizations in 2000. Beijing tried everything to stop them, it exerted strong pressure including using the western press. But St. John Paul II did not move: he explained that it was not a hostile gesture towards China, but exactly the opposite, and regardless, Pope Wojtyla claimed the Church’s absolute power to decide who to canonize and when. The Chinese government was also irritated by the choice of the date: October 1st is a national holiday in China and when the victory of the Maoist "revolution" is celebrated. But only months earlier, it was the Chinese government that had put the intentions of the Pope, from Eastern Europe, to the test by proceeding with illegitimate ordinations. In other words: Saint John Paul II was not afraid to stand up to the Chinese communist regime in defense of the authenticity of the faith and claim the prerogatives of the Church, for example in the appointment of bishops.

In the current situation, however, it doesn’t take much to notice the drastic U-turn that’s been taken, compared to the past. The Holy See signed an agreement with the Chinese government two years ago regarding the appointment of bishops, but the agreement - which is to be verified in September - is still secret. It is only clear that in order to reach such an agreement, the Church has yielded on all fronts, even going so far as to push "clandestine" priests to join the Patriotic Association. And regarding all the misdeeds of the Chinese government, grave silence. Silence on the repression of the Uighurs (Turkmen population living in the Xjnjang), silence on the persecution of Christians, silence on the violations of Hong Kong‘s Basic Law, which guaranteed autonomy to the former British colony for fifty years under the "one country, two systems" agreement, until 2047. And no answer to the questions posed by Cardinal Zen a year ago, when he even flew to Rome so as to warn Pope Francis personally of the very serious mistake he was making.

As in any self-respecting regime, there is someone who will explain to us that this pontificate is in perfect continuity with the previous ones and that therefore there is no reason to get too agitated. But the testimony of the Chinese martyrs is a cry that challenges us all and cannot leave us indifferent spectators of distant diplomatic events. The judgment on China concerns each and every one of us, because if martyrdom no-longer has value, neither does our faith.