The actor Genesius, from idolater to martyr

A fourth-century play created to mock Christianity became the moment of the sudden conversion of its author and protagonist. Saint Genesius changed the play by confessing his new faith in front of the emperor Diocletian, who was watching. He paid for it with martyrdom.
- THE RECIPE: ESICIA (Lobster rissoles) 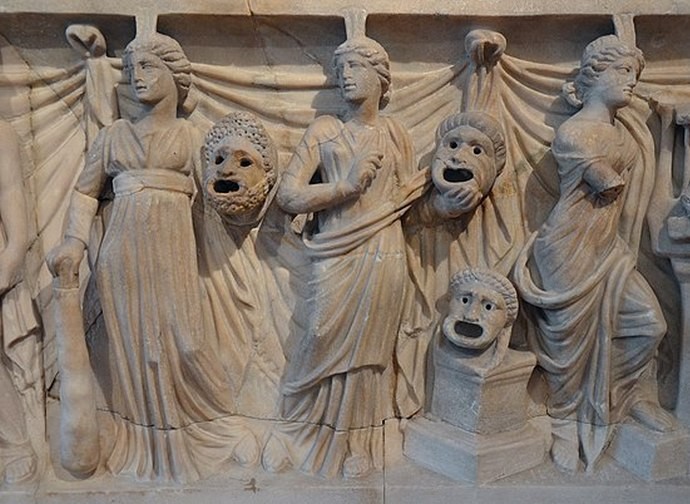 It is 15 August 303 AD, the Feast of the Assumption. Behind the scenes there is absolute silence. All that can be heard are the sounds produced by the musicians who, in the area reserved for them, are tuning their instruments. They will accompany the performance, which will begin shortly afterwards.
For the moment, the actors are intent on eating, in silence. Genesius, head of the troupe, is lying on a triclinium and eating alone. The other actors are grouped according to their rank in civilian life, the slaves among them, sitting on the ground a little apart, and the freedmen around Genesius.

They eat the same food and this is one of the many things that make Genesius a much-loved troupe leader in Rome: he treats his men equally, regardless of their social position. On the trays placed in front of them are soups (spelt, artichoke, chicken), carrots with cumin, fish in agrestum (unripe grape juice), pieces of libum (flatbread stuffed with cheese), puls (a kind of spelt polenta), minutal (fricassee of fish and minced meat, to which a rare and refined component is added: capon testicles), cowheel salad with honey and mustard, tyropatina (a very peppery cream of egg, milk and honey), olives, almonds, leeks and celery.
Genesius has only a small earthenware dish full of esicia (see recipe) in front of him: lobster rissoles. He only wants a light meal as he is about to play the role he has written himself.

Today's performance will not be easy, the emperor Diocletian himself (244-313) will attend. There is no room for error. The emperor had begun to appreciate Genesius for his talent and his ability to make him laugh. The latter had gradually become his favourite actor and Diocletian regularly attended his productions. Shows were often repeated, so that more people could attend.
Today Diocletian would attend a premiere, a parody of Christianity, this new religion he abhorred. He did not hesitate to punish in an exemplary manner those who embraced it, especially those who wanted to convert others.
Diocletian knew the educational and didactic power of the theatre and welcomed Genesius' idea of mocking Christianity: in this way the masses would absorb the message quickly and effectively.

Genesius has finished his rissoles and now stands up from the triclinium. He goes over his lines in a low voice, pacing back and forth, while the other actors are still eating. They are all drinking water sweetened with honey; the wine is reserved for later, if the play is successful: Genesius does not want the actors to get inebriated. He has worked too hard on this show, writing it, choosing the actors, rehearsing the dialogues and correcting them. He wants everything to go smoothly and the show to triumph, as always, with the emperor who will then pay him handsomely in appreciation. And he will, as always, share the money with the members of his troupe - another thing that made him unique in that job.

At last the actors take the stage: the emperor Diocletian has taken his place in the imperial gallery together with his entourage and the show must begin. The tribunes are packed.

What Diocletian had come to watch today was a satirical comedy intended to ridicule the Christian religion. Genesius is certain that the emperor will appreciate his latest effort. He walks out onto the stage and is surrounded by the acclamation of the people.
The comedy began, with Genesius playing the main part. His character pretended to be ill, so he lay down on the ground, asking his friends to bring him something to relieve his suffering, adding that he felt he was going to die and wanted to become a Christian, asking them to 'baptise' him. All the objects used to perform a baptism were brought to the scene (Genesius had studied the subject thoroughly and had mastered it in his quest for perfection in the scenes). An actor playing the priest came on stage to 'baptise' the sick catechumen. He was asked all the questions that are asked of those to be baptised. The ceremony was performed in such a ridiculous manner that the emperor and all the people burst out laughing.

At the moment when the pagan actors were mocking and blaspheming the Blessed Sacrament of the true Church, while the "priest" actor was pouring water on his head, the gates of Heaven opened before Genesius and a ray of light descended upon him. He felt an unspeakable peace in his heart, felt his sins fly away and felt his soul purified. An angel spread its wings and descended lightly towards him. Genesius held his breath, closed his eyes and thought he was dreaming. He opened his eyes and the angel was still there, hovering in the air and holding a parchment which Genesius was able to read. The ray of light still embraced him, removing all the weight from his heart and the fog from his mind. He felt such complete peace that he thought that if he died in that moment he would die happy.

Genesius wanted that moment to last for ever. He smiled at the Lord, whom he felt was so close: he realised that He had penetrated his heart and felt a hand brush his forehead. His companions, not knowing what had happened, continued the blasphemous mockery. When the whole ceremony had been performed, they threw a white robe over Genesius in mockery of the garment usually given to newly converted and baptised persons; thus clothed, they presented him to the people with great hilarity.

But Genesius, by now a true believer in Christ, turned to the emperor and the other spectators and confessed to them with great dignity what had taken place within him. He solemnly declared that until that day, blinded by idolatry, he had despised and mocked Christianity, and had therefore proposed to perform the baptism on the stage for the amusement of the people. But during the sacrilegious performance, his heart was suddenly changed and he wished to become a Christian. He said that he saw the heavens opened and that he saw a hand touching him when the baptismal water was poured over him. He further declared that before he was baptized, he had seen an angel, with a scroll on which were recorded all his past iniquities, but the angel assured him that they would all be purged by holy baptism, and that he had indeed seen that all his vices had been erased.

After reporting this, he added that he renounced idolatry, and believing that Jesus Christ was the Son of God and the Redeemer of the world, he would henceforth live and die a Christian. In conclusion, he urged the emperor and all those present to follow his example and worship the one true God.

It soon became clear to the emperor and the audience that he was no longer acting. The emperor then became furious at his confession and ordered him to be stripped of his clothes scourged with whips and sticks in front of all the people, and then thrown into prison. Plautianus, the prefect, was ordered to renew this punishment every day and to add more refined tortures until Genesius had abandoned his new faith and returned to the pagan gods. 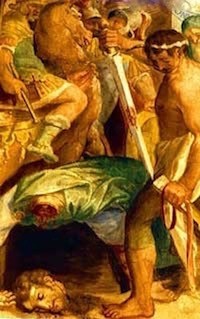 But the holy martyr withstood every torture, explaining to the prefect that the emperor was but a mortal man and that the immortal King of heaven and earth was the true King. Finally he bitterly regretted having so often mocked and offended God, and refused to obey Diocletian.
Plautianus, irritated by his temerity, reported his words to the emperor, who had Genesius beheaded. The sentence was carried out in the year of our Lord 303.  And so St Genesius, who from an idolater became a Christian, and from a mocker of Christianity a fearless confessor of the Saviour, received the crown of martyrdom.
The Christians managed to secure his body and buried him in the Cemetery of St Hippolytus on the Via Tiburtina with other Christian martyrs.

When the persecution ended and Rome was Christianised, his remains were exhumed and later solemnly enshrined in the Church of San Giovanni della Pigna near the Pantheon in Rome. The church in Rome, dedicated to him since antiquity, was restored and embellished by Gregory III in 741 AD In 1591 his relics were moved to a tomb in the Church of Santa Susanna where they still rest today.

Since ancient times Genesius has been considered the patron saint of actors and all those working in the theatrical arts; with the advent of cinema he is also regarded as its patron. More recently he has also been adopted as the patron saint of converts, dancers and epileptics. In recent years some historians have questioned the very existence of St Genesius, claiming that he was a Roman version of St Genesius of Arles, a notary who also died during Diocletian's persecution.
Although both martyrs bear the same name and died during the same persecution, it cannot be assumed that they are the same person.

The devotion to St Genesius the actor-martyr is attested in Rome as early as the 4th century, a few decades after his death and in the lives of people who would have known him personally or from the accounts of his contemporaries. Both the existence of his tomb and a tradition of his burial in Rome are solid arguments in favour of the authenticity of the tradition.
The famous ecclesiastical historian Louis-Sébastien Nain de Tillemont (1637-1698), known for his accuracy, detail, and conscientiousness, accepted the authenticity of the Acts in his work Mémoires pour servir á l'histoire ecclésiastique des six premiers siècles.
The Synaxarion of the Orthodox Church recognises both martyrs as distinct individuals (Genesius the actor of Rome and Genesius of Arles), with the same date of commemoration: 25 August. We have just celebrated both a few days ago.

The author thanks her friend Remo Girone, an extraordinary actor and man of faith, who suggested the research on the patron saint of actors.