That “we” which invalidates Baptisms

Invalid Baptisms and sacraments also in the diocese of Phoenix, where a "creative" parish priest had decided to baptise with the formula "We" instead of "I". A substantial difference because it is not the community that baptises, but Christ Himself. These are the rotten fruits of the liturgical creativity of priests who appoint themselves lords over the sacred. But it is the faithful who pay the price. 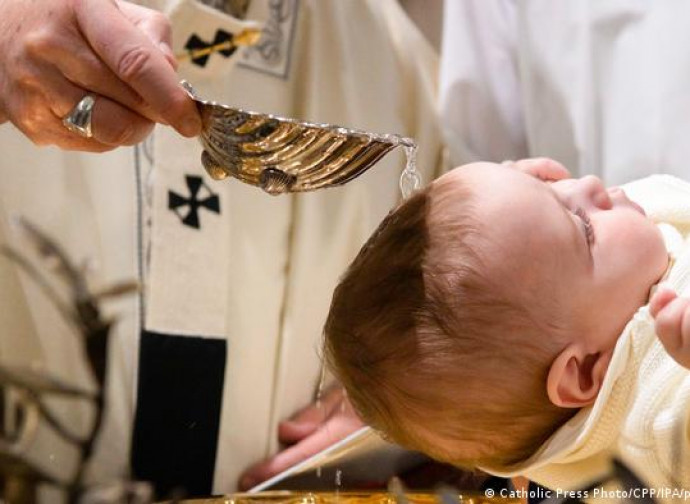 In the United States, the rotten fruits of liturgical creativity continue to emerge. In the summer of 2020, we reported (see here) on the clamorous case of Father Matthew Hood, a priest of the diocese of Detroit, who, while watching videos of his own Baptism, realised that the deacon administering the sacrament had used the formula "We baptise you" instead of the prescribed "I baptise you". The formula is clearly not only illegitimate, but also invalid, as the Congregation for the Doctrine of the Faith had explained in a Responsum of 2 August 2020. Thus, as his Baptism is invalid so is his ordination, and so are all the sacraments he administered - except for Baptisms and, in a certain sense, the assistance to Marriages - during the years of his "fictitious priesthood". Actually, Fr Hood had only gone to check the Baptismal video again after reading the Responsum. When he realised that the formula was invalid, he remembered hearing in the video that the deacon had used it: "We baptise you...".

A similar case emerged a few weeks later, this time in the diocese of Oklahoma City (see here). When newly ordained Fr Zachary Boazman read the Responsum, he went to check the video of his baptism and discovered that the invalid formula had been used.

Now it is the diocese of Phoenix that has recorded yet another serious abuse. The bishop, Mgr Thomas J. Olmsted, announced this in a message addressed to all the faithful of the diocese: “It is with sincere pastoral concern that I inform the faithful that baptisms performed by Reverend Andres Arango, a priest of the Diocese of Phoenix, are invalid. This determination was made after careful study by diocesan officials and through consultation with the Congregation for the Doctrine of the Faith in Rome. Specifically, it was reported to me that Fr. Andres used the formula, “WE baptise you in the name of the Father, and of the Son, and of the Holy Spirit.”  The key phrase in question is the use of “We baptise” in place of “I baptise.” The issue with using “We” is that it is not the community that baptises a person, rather, it is Christ, and Christ alone, who presides at all of the sacraments, and so it is Christ Jesus who baptises”.

Therefore all the baptisms administered by Fr Andres Arango in the three parishes where he was pastor during his twenty years as a priest are invalid. After an investigation, the diocese believes that the priest, who has since resigned as parish priest, started administering baptisms in a valid form on 17 June 2021. Obviously, people who had only apparently been baptised had also received the other sacraments, which require prior baptism, invalidly. The diocese will therefore now have to contact each of the people who have received invalid baptism from Fr Arango and baptise them in the absolute form. The absolute form differs from the sacrament conferred in the conditional form, because, while the latter implies that there are serious doubts about the validity of the sacrament conferred, in the case of the absolute form there is the certainty of its invalidity. In other words, the Church has no doubt about the invalidity of the baptisms administered by Fr Arango.

Faced with this umpteenth disaster, Mgr Olmsted tried to excuse the priest: "I do not believe that Father Andres had any intention of harming the faithful or depriving them of the grace of Baptism and the sacraments". That goes without saying. But the problem does not lie in the good or bad faith of the priest. We should ask ourselves how it is possible that a priest, after at least six years of seminary and, in this case, years and years of pastoral ministry, did not know that such a change in the formula of Baptism renders the sacrament invalid. One wonders, what do these priests study for all these years, if they then trip up on such fundamental issues?

Second problem. Assuming that Fr Andres was absent while these things were being masterfully explained in the sacramentary courses, why on earth does a priest take the liberty of changing what the Church prescribes? It is no mystery that in many Eucharistic celebrations, even in Italy home to the Vatican, priests alter words and gestures regulated by the Missal as they please. They add words that, in their opinion, illuminate terms that have fallen into disuse; they remove words that, again according to their indisputable judgement, are no longer understood or risk hurting the faithful; they replace, for the same reasons, one term with another; they omit bows or genuflections and add gestures more suited to a Hollywood setting than to a church. All this despite the fact that the last Sacred Council, the one that for some is the only one, explicitly states: “No other person, even if he be a priest, may add, remove, or change anything in the liturgy on his own authority” (Sacrosanctum Concilium, 22).

Not to mention the alteration of sacred places, where sacred vessels, vestments, statues, kneelers, and even entire altars are removed, according to the will of the priest (or bishop) in office, because they are judged to be inconsistent with the spirit of the liturgical reform. In accordance with the unquestionable judgement of the parish priest, the rector, and the bishop, the churches are invaded by banners, flags, cameras and floodlights, and even transformed into restaurants for the poor. And pastoral 'reasons' are always put forward.

If liturgical creativity is not only tolerated, but even promoted, in opposition to an unspecified rubricism; if people feel they are the masters of the liturgy and sacred places, forgetting that they belong to God and not to the people, then it is clear that situations such as those of Fr Arango are destined to multiply. And it is always the faithful who pay the price, of course. In the best case scenario - which becomes very wearisome over time - they have to cope with the creative and pastoral desires of their pastors, who are not too concerned about violating not only the most sacred thing on earth, but also the "sense of the sacred" in the hearts of the faithful. In the worst case scenario, on the other hand, one discovers after several years that they had never been reborn of water and the Spirit or, which is even worse, that they do not even know they have received invalid sacraments. Isn’t this too a serious form of clericalism?