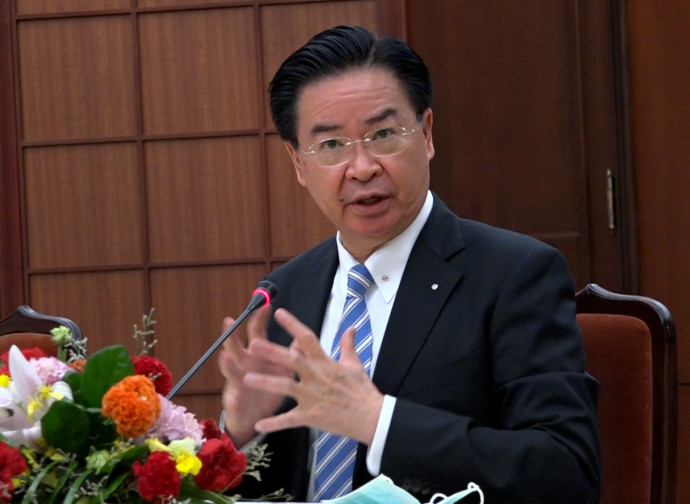 "Not only the Vatican but the entire international community must think about religious freedom in China”. This was the appeal made by the Minister of Foreign Affairs of the Republic of China (Taiwan), Jaushieh Joseph Wu, during a meeting with a delegation of foreign journalists in Taipei, in which the Daily Compass was the only Catholic presence.

Joseph Wu took the opportunity to denounce what is happening inside Communist China: "Some churches have been attacked, many crosses have been knocked down and burnt, in some places have been forced to hang a picture of the Chinese leader and a message of patriotism, but I think this is completely contrary to the idea of religious freedom".

In fact, "in China the authorities have increased the pressure on Christians, through indiscriminate arrests, forced closure of churches, and the use of oppressive surveillance systems", as the report by the Pontifical Foundation Aid to the Church in Need (ACS) confirms, released on 17 November, entitled Persecuted and Forgotten? A report on Christians oppressed for their faith 2020-2022.
A drama suffered not only by Christians, but by all religious denominations. "In China, people know what is happening in Xinjiang and Tibet, where those who have a different culture and religion are oppressed (by the Chinese government). And not only Xinjiang and Tibet are oppressed by the Chinese government”, the Taiwanese minister reiterated. For example, Bishop Joseph Zhang Weizhu of Xinxiang (Henan) has been detained since 21 May 2021 in an unknown location, and not only that: a UN report has denounced serious human rights violations taking place in Xinjiang, including “systems of torture or ill-treatment, among which forced medical treatment and critical conditions of detention”.

In this context, the Holy See renewed for a second time the provisional and secret agreement with Beijing on the appointment of bishops in the People's Republic, signed in September 2018, while Xi Jinping was reconfirmed for a third presidential term and the trial of Cardinal Joseph Zen Ze-kiun, a critical voice against the regime's repression, currently under house arrest, continues in Hong Kong.

In the meantime, since 1972, no nuncio resides on the island, only a 'chargé d'affaires ad interim' which begs the question: how are relations between the Holy See and the Republic of China (Taiwan)? Could the absence of a nuncio in Taiwan be a consequence of Chinese pressure? "Relations between Taiwan and the Holy See," replied the minister, "have been fairly stable in recent years. Although there have been discussions about the Vatican continuing to seek diplomatic relations with China, we have been repeatedly reassured by various high-ranking officials that this dialogue between the Vatican and China only concerns religious, not political, issues, and they have told us not to worry about this”.

Last 5 October, Taiwan celebrated 80 years of diplomatic relations with the Holy See with a reception in Rome, attended by several Vatican dignitaries, including Archbishop Paul Richard Gallagher, number 2 of the Secretariat of State, who in his speech confirmed the friendly relationship with democratic China: "I thank Taiwan and the Embassy for the solidarity activities carried out recently, particularly in the context of the pandemic. I would like to acknowledge the great work done by the Embassy in support of Taiwanese priests and religious around the world”, he said.

But it should be noted that Monsignor Gallagher did not allow the journalists present to film his speech. A fact that had never occurred in events held with other countries, perhaps so as not to irritate the Chinese authorities precisely in view of the renewal of the secret agreement. But this is not the first time that sui generis situations have occurred with Taiwan during Francis's pontificate: in 2018, the photo of the greeting between the Pope and Taiwan's acting vice-president, the practising Catholic Chen Chien-jen, who had travelled to Rome to attend the canonisation of Paul VI and six other blessed, was removed from all Vatican media; and in 2020, the Holy See did not support Taiwan’s appeal to attend the World Health Organisation assembly on the coronavirus.

Despite all this, "our relations with the Vatican continue and we are working assiduously to mobilise all kinds of humanitarian aid in different parts of the world", Jaushieh Joseph Wu explained to the Daily Compass, emphasising Taipei's concern over Xi Jinping's persecution of Christians. "Not only the Vatican, but the whole international community has to think about religious freedom in China... We, the people of Taiwan, want to work with the Vatican and other freedom-loving countries to advance religious freedom in China, and I think this is more crucial than anything else. When we see the discussions between the Chinese government and the Vatican on religious issues I think this (religious persecution) is the most important thing to discuss”

.It is clear that the Holy See cannot be satisfied with the results of the agreement with Communist China, just as it cannot forget that in Taiwan there is a mature democracy that resists Xi Jinping's threats, where all freedoms are protected, and where the Church is respected.