Sixtus IV and Platina, a historic meeting for gastronomy

Over the centuries, various Popes have left their mark - some more, some less - on culinary art and literature. In particular, Sixtus IV financed the first printed book on gastronomy, 'De honesta voluptate et valetudine', written by Bartolomeo Sacchi, known as Platina, who not only wrote his own recipes but also translated into Latin those of a great chef of the time, Maestro Martino. 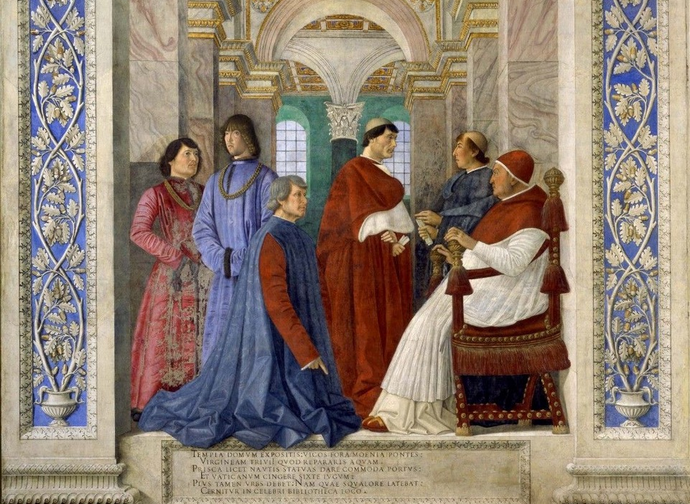 Pontiffs are monarchs and as such, as well as spiritually directing millions of the faithful, they also have more "earthly" obligations, such as welcoming guests to their table. Over the centuries, the Pontiffs have left their personal mark on gastronomy and culinary literature, some more, some less.

Today we look at Sixtus IV, who financed the first printed book on gastronomy (an incunabulum), published around 1474: "De honesta voluptate et valetudine", by Bartolomeo Sacchi, known as Platina. But it is perhaps worth knowing, in broad terms, how a Pontiff came to make it possible to publish a treatise on cooking.

Born in Celle Ligure in 1414 as Francesco della Rovere into a family of minor nobility, he entered the Order of Friars Minor Conventual (Franciscans) at a very young age - nine - at the behest of his mother. He studied successfully in the Franciscan monastery in Savona, took his vows at the age of 15, and seven years later, in 1435, went to study theology at the University of Bologna. He showed great intellectual gifts and, once he had obtained a doctorate in theology, he taught at the great universities of his time: Bologna, Siena, Padua, Florence and Pavia.

In addition to his academic career, Brother Francis rose through the ranks of the hierarchy of the Franciscan Order: first appointed Minister of the Franciscan Province of Liguria (1460), he then became Minister General of the Franciscans in Perugia on 19 May 1464. He handled the post with dedication and firmness of mind, holding it until 1469, on the occasion of the general chapter held in Venice, managing to eliminate unworthy individuals and trying to restore morality in the various monasteries. For this indefatigable activity, Pope Paul II rewarded him by making him a cardinal on 18 September 1467.

Four years later, we find him on the papal throne: after the death of Paul II, Francesco della Rovere was unanimously elected pope on 9 August 1471 by 18 cardinals in conclave. As Pope, he was behind many remarkable undertakings, both material and spiritual: he fostered Marian devotion, celebrated the Jubilee of 1475, supported two great crusades against the Ottoman Empire, consented to and "corrected" the Spanish Inquisition, at whose head he confirmed Cardinal Torquemada, financed several constructions and buildings (including the Sistine Chapel), transitioning Rome from medieval to Renaissance architecture, but above all - and this is the aspect that interests us most - he restored oxygen to humanism in all its forms.

His meeting with Bartolomeo Sacchi (1421-1481) led him to reorganise the Vatican Library. He appointed Platina as prefect (a moment immortalised by Melozzo da Forlì in the spectacular painting of 1477 "Sixtus IV appoints Platina Prefect of the Vatican Library").

Platina had had bad relations with the previous pontiff, Paul II, who had abolished the corps of abbreviators, of which he was the coordinator. Wanting to convince the Pontiff to reconsider his decision, Platina wrote him a letter in which he defended the profession of abbreviator with all his might, but the result was quite the opposite. The Pope sent him to prison and accused him of heresy.

As a prisoner in Castel Sant'Angelo, Platina met Cardinal della Rovere, the future Sixtus IV, who visited the prison one day (as he did hospitals and other places of human suffering). That first meeting remained in the memory of the cardinal who, once he became Pope, sent for Platina and entrusted him with the Library.

Platina drew up the first catalogue raisonné of the Library and had the opportunity to see and touch, one by one, the manuscripts that had already been collected by Nicholas V but had never before been arranged in any logical order. Among the hundreds of manuscripts, one in particular attracted his attention: the recipe book in the vernacular of Maestro Martino, a refined cook born in Ticino and who went on to serve the great personalities of his time (Francesco Sforza in Milan, Cardinal Ludovico Trevisan, Patriarch of Aquileia, nicknamed 'Cardinal Lucullus' for the pomp of his banquets, and the commander Gian Giacomo Trivulzio, where his career ended). But Maestro Martino's recipes are immortal, because Platina retrieved them, translating them into Latin, in his already mentioned "De honesta voluptate et valetudine", which is not a recipe book as such, but a treatise on Renaissance gastronomy. A few years later, the book was also translated into Italian: a copy is available at the Emporium antiquarian bookshop (contact@emporium-art.com).

Platina and Sixtus IV are, one as a layman, the other as a religious man, the two sides of the same coin. They are two men who, each with his own expertise, left to posterity things that make them immortal. Among these is the treatise on cooking, which was lovingly compiled by Platina (he himself cooked very well, although he was not a cook), enriched with his own recipes (including salad recipes, which was rare at the time because only the poor ate salads), with much attention paid to health and the influence of food on it. Maestro Martino's innovational energy pushed Platina to undertake new analyses on gastronomy, nutrition, the value of 'local' products, and even the value of regular physical activity.

Once the book was finished, Sixtus IV paid for its printing. Over the centuries it would be reprinted several times and in addition to the Italian edition, a French edition would also be published. But that first Latin edition remains a great rarity. It is worth visiting the Vatican Library to leaf through it.

In addition to "De honesta voluptate", Platina wrote several other books, mainly on history: "De principe", "De vera nobilitate" and "De falso et vero et bono". And, last but not least, the "Liber de vita Christi ac omnium pontificum", a collection of biographies of the Popes, in which he got back at Paul II by painting him in, to put it mildly, dismal colours. As if to say, revenge is a dish best served cold. And Platina knew a thing or two about dishes.