From Tony Blair's wheeled shelf to Boris Johnson's chunky podium until Rishi Sunak's recycled wood: a curious British tradition grants every prime minister a personalised lectern for their first speech in front of 10 Downing Street. It’s also a way to read their style of government. But the most famous debut, without a lectern, was Margaret Thatcher ... 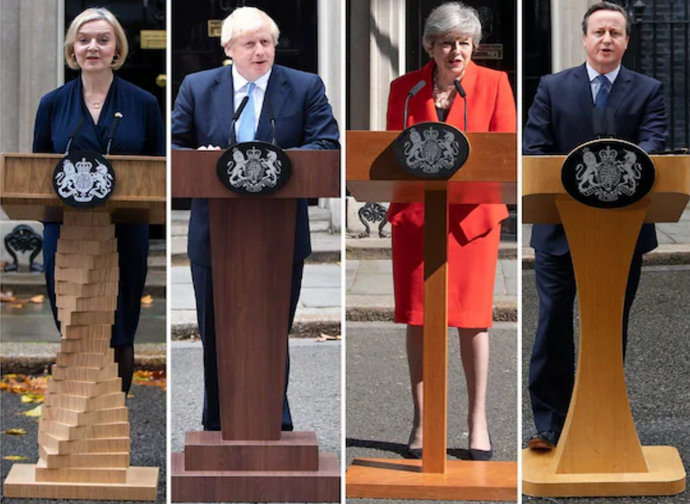 Until recently, few knew about a curious tradition that exists in the UK: every new prime minister (PM) gets to design a lectern for their first speech in front of No.10 Downing Street. It came to the fore with Liz Truss’ quirky design and the rapid turn over of prime ministers, six in the last seven years. Varying in shapes, sizes and colours of wood, the public began to wonder what each bespoke lectern revealed about the person standing behind it. This is how they compare over the last decade.

When Rishi Sunak unveiled his podium on October 25, political anoraks immediately noticed he had broken with tradition. Due to the rapid succession of leaders, reportedly, there wasn't the time (two to three weeks) to manufacture a unique lectern for the in-coming prime minister. Instead, the former Chancellor, 42, choose one from storage that was straight and traditional in pale wood. It looked as if he had taken the top from his predecessor’s podium and attached it to a noticeably shorter stand. PM Sunak measures only 5ft 6inches (168 cm) and is the shortest male occupant of No. 10 in political history since Winston Churchill. He certainly would have been overshadowed by a taller stand but some saw in the simple sturdy lectern, Sunak’s efforts to present a solid image to the public and a new era of cost saving and sacrifice. Perhaps, the environmentally conscious PM thought the public would be impressed by his recycled lectern which saves taxpayers between £2,000 and £4,000, but the shock for those who discovered they had been footing the bill all these years, was probably far greater!

Liz Truss's twisted column made of wooden blocks is certainly the most noted and the most costly of all lecterns to date. She clearly designed it with the intention to make her mark and be remembered. But, it quickly became a metaphor for the political turmoil that plagued her short stay in No.10. The twists and U-turns that characterised Truss' efforts to calm the markets and appease her critics were prophetically reflected in her choice of design. The bizarre lectern was compared to the block-building game Jenga which eventually collapses, due to its spiral design. It was the most short-lived lectern in British political history and made spirals an ill-omen for future lecterns.

Bold, brash, Boris Johnson, broke new ground when he became the first prime minister  to opt for a two-tiered based lectern made in a dark brown shade. His lectern was the largest out of any prime minister from the 21st century. The chunkier design was reportedly intended to withstand his bombastic character, waving arms and being thumped as he delivered his energetic speeches. But its similarity to the lecterns used by American presidents in the Whitehouse smacked of his larger than life personality and his misplaced sense of superiority and security. He was evicted from No. 10 for flouting his own Covid laws.

Theresa May's lectern was designed by Fiona Hill, her joint chief of staff, to look feminine. Being stylish and feminine was something the PM prided herself on. She was renowned for her leopard print shoes, red lipstick and statement necklaces. In interviews, she portrayed herself as a sensitive person who took things to heart shedding a tear under severe pressure. She chose a simple, linear lectern made of cedar wood. The base was wider than the podium, and came in a light, varnished finish. It was slightly darker than her predecessor’s David Cameron, which was associated with the dark dismal days of Brexit negotiations. It was also one of the most visible lecterns in history as it featured heavily during Brexit updates. With hindsight, critics compared its light design to the scarcity of her political achievements when she left No. 10. True to the image she had portrayed as leader, she famously walked away from her lectern in tears as she resigned as prime minister.

David Cameron swept in to power by defeating Labour and sealed his victory standing behind the first Tory modern lectern. He picked a sleek and futuristic curved design in light wood with a government crest at the top. It was designed by Baroness Sugg, his head of operations, and was designed to look statesmanlike. It was also the first all-wood finished lectern. Appearing narrower in the middle, and wider at each end, the hour-glass shape became a metaphor for the division he was accused of leaving behind due to the Brexit referendum.

Gordon Brown inherited his lectern from his predecessor Tony Blair. Both leaders were considered architects of the modern era of “New Labour” and their lectern became a metaphor for change. It was the first to be designed on wheels, much like those on office chairs, and was the first to be pushed in to position instead of lifted. The basic ‘floating shelf design’ was Tony Blair’s idea. There was enough space for notes, but it wasn’t tilted like future lecterns to hide them. The customary government crest at the top of the lectern was replaced with the government website. Two bulky microphones poked out over the top. It became a symbol of the labour leaders insistence on doing things their way which ushered in a decade of Conservatism.

Not every PM, however, stood behind a lectern to make their first speech. When Margaret Thatcher arrived at No. 10, she famously astounded everyone by walking over to the press to announce she wanted to quote a prayer. “I know full well the responsibilities that await me as I enter the door of No. 10,” she said. (……)  “And I would just like to remember some words of St. Francis of Assisi which I think are really just particularly apt at the moment. ‘Where there is discord, may we bring harmony. Where there is error, may we bring truth. Where there is doubt, may we bring faith. And where there is despair, may we bring hope’”.

It was a historic moment. Never before or since has a leader’s first words struck such a chord or remained so fixed in the national consciousness. But, they returned to haunt her. Her period in office was certainly far from harmonious and Margaret Thatcher’s critics accused her of breaking her word. She was certainly a controversial political figure, but Margaret Thatcher understood the challenges of government need to be based on great ideals rather than distinguishing herself with a great lectern.