Bobby Sands, a young Irish Catholic that joined the IRA in 1972, died as a hunger-striker just 40 years ago protesting against Britain’s rule in Northern Ireland. Also pope John Paul II tried unsuccessfully to intervene to end the hunger strike. 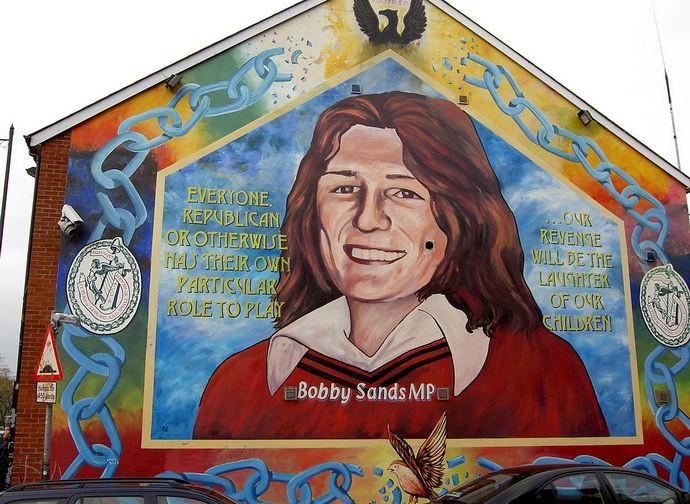 Bobby Sands was an Irish Catholic, who died forty years ago protesting against Britain’s rule in Northern Ireland during the period known as the “Troubles” (1968-1998). Today is the anniversary of his burial on May 7, 1981, in Belfast. He was only 27 years old when his life ended on the 66th day of hunger-strike in H-Block Long Kesh prison. The anniversary of his death has once more ignited the on-going debate over his legacy. But Bobby will always be remembered for his defiance, a genuine David against Goliath story, which won him international fame and changed the course of British political history.

Bobby Sands against the grain boldness marked his short life. He was born in 1954 to a catholic family in north Belfast in a dramatic period of Northern Irish history. When Bobby was just ten years old, the increasing tensions between loyalists and nationalists forced his family to move away from the largely loyalist area where they lived to a nationalist estate in west Belfast. The injustices he and Catholics were subjected to, led Bobby at the age of 18 to join the Irish Republican Army (IRA) in 1972. A few months earlier the Bloody Sunday massacre had taken place, when the British army fired on unarmed civilians participating in a peaceful protest, killing 14 Catholics. Most were shot running away from the soldiers while others were shot tending the wounded. It is considered the worst mass shooting in Northern Irish history.

In 1973, Bobby was arrested on an arms offence and sentenced to five years imprisonment which he served in Long Kesh as a political prisoner. He was released in April 1976 and rearrested in October 1976. He was sentenced to fourteen years and imprisoned in H-block prison as a common criminal. The government of Harold Wilson in 1972 abolished the "special category" status that IRA prisoners had previously been granted, allowing them, among other things, to wear their own clothes. The policy attempted to brand Irish resistance to British occupation of Ireland as a criminal act without political motivation. Bobby Sands, along with ten others refused to wear the prison uniform and chose to go naked rather than be treated as criminals instead of political prisoners. They covered themselves with the blankets left on their beds and became known as the “blanket men”.

Life in prison was horrific. Bobby Sands’ writings on pieces of toilet paper using a biro refill hidden inside his body were smuggled out of prison and published in Republican News under his sister’s name Marcella, describe the living hell of life in H-Block. Prisoners were kept in solitary confinement for years and subjected to regular beatings. In a further attempt to break their will, the authorities refused the prisoners access to toilets and washing facilities. The prisoners retaliated by wiping their excrement on their cell walls and throwing their urine on the floor and under the door. It became known as the “dirty protest”. When their request for political status was still ignored, they chose the nuclear option, a hunger-strike until death.

The Catholic Church in Ireland at the time was unjustly criticised for having abandoned the prisoners to their fate. Bobby Sands was a practicing catholic and attended weekly mass on Sunday. What no one knew at the time was the extent to which (Saint) Pope John Paul II also tried unsuccessfully to intervene to end the hunger strike. In 2012, declassified British documents revealed that, after the pope sent a special envoy, Bobby Sands was willing to suspend the fast just days before he died. The offer was conveyed to the British authorities by the pope’s secretary, Irish Monsignor John Magee, whom Pope John Paul dispatched to persuade the prisoners to call off the hunger strike. The state papers, declassified under the 30-year rule, claim that Bobby Sands told Msgr Magee, who later became the Bishop of Cloyne, that he would suspend his strike in return for discussions with a British government official, two priests and three other prisoners as witnesses. But, the British rejected the offer, claiming it was an attempt to open negotiations.

Bobby Sands was the first to die of the hunger strikers. The response to his death proved Margaret Thatcher wrong on two accounts. Firstly, counter to her claims, republicans enjoyed wide spread support and secondly that having been elected, while on hunger strike, as MP for Fermanagh and South Tyrone to the British Parliament, he was unequivocally a political prisoner. His death proved a disaster for the British government. Bobby became a hero for the Republican movement and the scandal of the hunger strikers’ deaths brought the Northern Ireland problem to international attention. Britain is still struggling to deal with the legacy of that period today.

It’s estimated around 100,00 mourners came to Bobby’s funeral. Over the subsequent three months, nine other hunger strikers died and were buried with full IRA honours with more continuing to join the cause. By now, Mrs Thatcher had to face the facts, she was getting no closer to victory. She decided to send James Prior to Belfast as Northern Ireland secretary, to try to resolve the hunger strike. Prior, negotiated an end to the strike and once it was over, modified prison rules to accommodate the prisoners original requests. They were allowed their own clothes, permitted to associate freely, granted more visits and excused prison work. The hunger strikers had won - but at a horrific cost. In 1984 when the IRA bombed the Grand Hotel, Brighton, where the Conservative Party was holding its annual conference. Five members of the party were killed. Mrs Thatcher narrowly survived. To the IRA leadership and rank and file, that was revenge for the hunger strike.

Bobby Sands believed that for life to be worth living, there have to be things for which it is worth dying. He bet his life on overthrowing British rule with a vision of a united Ireland under one government. But to this day, his dream remains unfulfilled and Northern Ireland continues to suffer waves of sectarian violence. What’s more, little remains of the Catholic culture and values that characterised Bobby’s life forty years ago. In fact, one wonders whether he would consider all the suffering and deaths of the hunger strikers a price worth paying for a united Ireland based on the liberal values upheld in Eire today.