Shepherds chosen by the sheep: there is a problem with women in the Dicastery

Reversal between shepherds and sheep: in choosing their own pastors the sheep end up playing the role of the shepherds; both John Paul II and Benedict XVI had warned against clericalising the laity, giving them roles and ministries that belong instead to sacramental ministers. The problem with the three women (one lay woman) chosen by the Pope in the Dicastery of Bishops is not one of skill and competence, but of sacred order. A clumsy manoeuvre to 'modernise' the Church or a further step towards female priesthood? 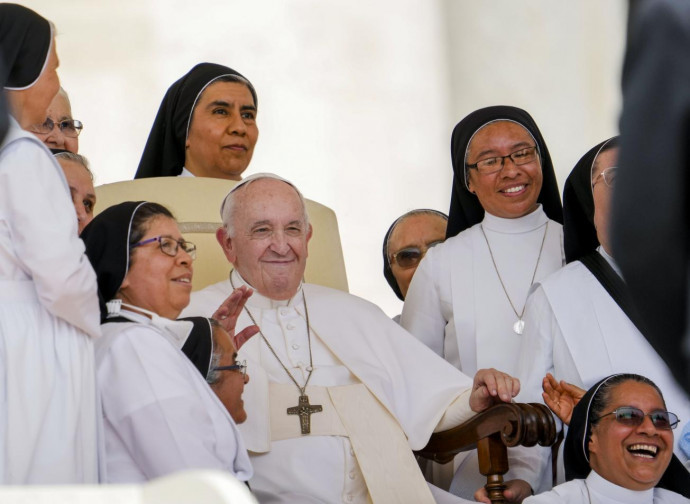 The Pope had anticipated the appointment of two ladies about a week earlier, during an interview with Phil Pullella of Reuters (see here). But, as the saying goes, “there’s no two without three”; and in fact there are three women who will share with the other members (one abbot, all the rest bishops) the responsibility for the appointment of bishops, as well as the establishment, regrouping, or suppression of local churches and the erection of military or personal Ordinariates, tasks proper to the Dicastery headed by Cardinal Marc Oullet.

In addition to Sr Raffaella Petrini, already a career nun, the pink quota will also be increased by the presence of the Superior General of the Daughters of Mary Help of Christians, Sr Yvonne Reungoat, and the Argentine sociologist Maria Lia Zervino, President of the World Union of Catholic Women's Organisations and member of the Ordo Virginum. The news was generally welcomed as a sign of the Catholic Church's openness to women and recognition of their unique contribution.

It was also correctly pointed out that these three appointments are in line with the indications for reform of the Roman Curia, expressed in the Apostolic Constitution Praedicate Evangelium, published on 19 March.

It is paragraph 10 that encourages the presence of lay people in the various Curia Dicasteries, due to the fact that “the Pope, the Bishops and other ordained ministers are not the sole evangelizers in the Church”. The Constitution emphasises that “each Christian, by virtue of baptism, is a missionary disciple ‘to the extent that he or she has encountered the love of God in Christ Jesus’”. Therefore, the reform of the Curia “should consequently make provision for the involvement of lay women and men, also in roles of government and responsibility”. Their presence and their participation is essential, since they contribute to the well-being of the entire Church”.

However, there is a catch. It was pointed out by Father Gerald Murray, priest of the Archdiocese of New York and canon lawyer (see here, min. 5.56-7.00): "The presence of lay people in the Congregation of Bishops is a big problem. The bishops on the Congregation advise the Pope on the candidates to promote to bishops and they do so on the basis of sharing in the governance of the Church, as advisors to the Pope, being bishops themselves”. Fr Murray explains that in this way there is an inversion between shepherds and sheep: the sheep end up playing the role of the shepherds, in choosing their own shepherds; both John Paul II and Benedict XVI had warned against clericalising the laity, i.e. giving them clerical roles and allowing them to exercise sacred powers, but these are exercised by the shepherds not by the sheep.”

Governance in the Church can only be legitimately exercised by pastors, who become such through sacramental ordination. It is not fundamentally a matter of skill and competence, but of sacred order. At the General Audience of 26 May 2010, Benedict XVI explained that the word 'hierarchy' means '"sacred origin", that is: this authority does not come from man himself, but originates in the sacred, in the Sacrament; it therefore submits the person to the vocation, to the mystery of Christ; it makes the individual a servant of Christ and only as a servant of Christ can he govern, guide for Christ and with Christ. It is this sacred principle that creates the shepherd; and the shepherd is such "precisely by guiding and guarding the flock, and sometimes by preventing it from scattering. Except in a vision which is clearly and explicitly supernatural, the task of governing which belongs to the priest is incomprehensible”.

Is this a clumsy manoeuvre to 'modernise' the Church, responding to the mounting demand to give more space to women? Or is it a further step to move in the direction of female priesthood, meanwhile granting without ordination what can only be conferred by ordination?