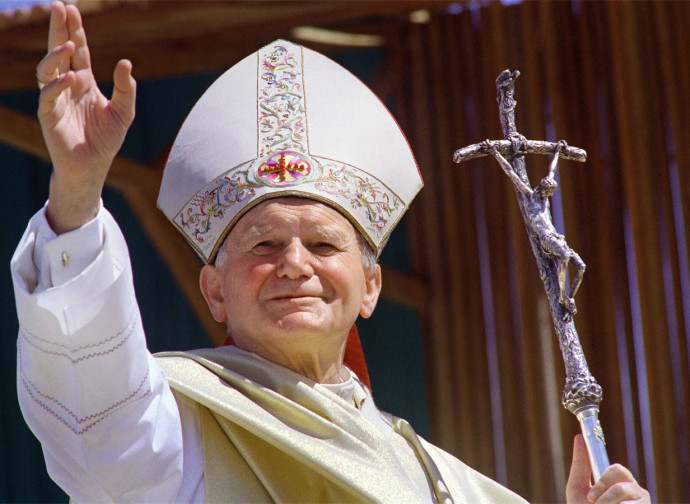 We begin this new cycle of articles - dedicated to the regions and countries of the saints' birthplaces and their gastronomy - with a saint whom many of us have met, talked to and touched: John Paul II (18 May 1920 - 2 April 2005).

Karol Wojtyła was a man of simple tastes who loved the traditional dishes of his country, Poland. When he was pope, St John Paul II usually had an early lunch and dinner, as his day started around 5.30am. His first meal was certainly the most important: the Body of Christ, the spiritual banquet of the Holy Mass.

After Mass he would have a light breakfast, he was content with a little bread and butter and a cup of tea. For lunch he always had soup, usually followed by a small portion of meat and several vegetables, finishing with fruit. At dinner he ate the leftovers from lunch. Everything was carefully prepared by the Polish nuns.

Born in Wadowice, near Krakow, St John Paul II always had a special relationship with food, an almost spiritual relationship: sharing, communication, joy. He spent part of his life eating simple, modest and frugal dishes, due to the historical events that marked his early decades. When he was born, in 1920, the world had not long emerged from the First World War, with a shortage of goods (including food) and the poverty typical of any post-war period.

He was nine years old in the midst of an economic and financial crisis (1929). On his 19th birthday, the Nazis invaded his country. The University of Krakow, where he was studying, was closed down. He and other young men were forced to work, which Karol did from 1940 to 1944. One of his workmates, Blazej Kowalczyk, wrote to his father in a letter: “Among my colleagues there is a certain Karol, a native of Wadowice, like you, who does not let the situation get him down. Every day he brings something to eat and shares it with all of us. And he jokes about everything”. This habit of Karol Wojtyła of sharing what he had to eat is also described by others. In 1942 he entered the clandestine seminary directed by the Archbishop of Krakow Adam Józef Sapieha (Krasiczyn, 14 May 1867 - Krakow, 23 July 1951) and began to study to become a priest. The end of the war, in 1945, brought peace, but also the despair of Soviet Communism, which seized power in Poland. Karol was 25 years old. A year later he was ordained a priest. The same year of his ordination (1946) he moved to Rome to study at the Angelicum, the Pontifical University of Saint Thomas Aquinas. In Rome, along with the Eternal City, he discovered the typical Roman trattorias, where he liked to go every now and then, choosing dishes that reminded him vaguely of home: tortelloni, similar to pierogi, meat stew, which had a homely feel, bomboloni, which reminded him of the delicious paczki. But he missed many things from his own cuisine: sauerkraut, beetroot, soups, poppy-seed cakes... All these dishes are largely unknown in Italy (which is a shame, because they are excellent). Poland's cuisine is very much influenced by its neighbours: there are many ingredients typical of German cuisine, but also of Czech and Hungarian ones (goulash). Already in medieval chronicles we find detailed descriptions of typical recipes: it was a very spicy cuisine, based on meat and cereals. Spices, especially pepper, nutmeg and juniper, were used extensively, as was the custom at the time, on the one hand because they added flavour to the meat, and on the other because imports from Eastern countries were flourishing at low prices. The use of honey and turnips was very common. Among the most popular spirits were beer and mead, with wine coming mainly from Silesia and Hungary. In 1518 Queen Bona Sforza (1494-1557), born Duchess of Bari and Rossano, revolutionised Polish cuisine by bringing Italian chefs to the country.

The first Polish recipe book, the Compendium Ferculorum, albo Zebranie potraw, was published in 1682 by Stanisław Czerniecki. In 1786, Wojciecha Wieldek published Kucharz doskonały (The Perfect Cook). Stanisław August brought further changes to tradition with the fashion for very light French cuisine. A series of books by Jan Szyttler (1763-1850), a pupil of a famous royal cook, were later published. The dishes that can be said to be traditional still come from the recipes of 19th-century authors such as Lucyna Ćwierczakiewiczowa (1826-1901): the famous bigos, a stew of various meats, cabbage and sauerkraut with prunes and spices, is still very popular today. The pierogi we mentioned above also have ancient roots: they are thick ravioli filled with meat, mushrooms, cheese and cabbage. The dish known as szałot (in Silesia it is simply called sałatka jarzynowa, vegetable salad) is a similar preparation to salade de boeuf, but even more delicious: boiled potatoes and carrots, pickled gherkins and peppers, radishes, olives, hard-boiled eggs, peas, ham, sausages, all diced and dressed with mayonnaise; the preparation is then decorated with multi-coloured bits of vegetables.

The soups are many and varied, all of them delicious: traditional soups include barzcz, a beetroot soup which is, in fact, the equivalent of Russian boršč (sour soup of wheat starch with potatoes and sometimes cream) and kapuśniak, made from pickled cabbage.

Typical desserts include makowiec, a kind of strudel with poppy seeds, sernik, a cake made of fresh cottage cheese, and piernik, gingerbread with honey and spices. But pascha, a delicious mascarpone cake with sultanas and orange peel, deserves a special mention: it is a dessert of Jewish origin and is also popular in large parts of Russia, as well as in Ukraine. A recipe as simple as it is delicious.

Finally, dulcis in fundo, let's talk a little about Saint John Paul II's favourite dessert: kremowka. From time to time, in order to overcome his homesickness, he would eat this exquisite cake, made of puff pastry filled with cream and which became famous under the name Kremówka Papieska (the Pope's Cream Cake). John Paul II recounted how, as a young man, he and some friends organised a competition to see who could eat the most portions of kremowka to celebrate their graduation. Karol managed to eat 18, but he was not the winner.

These and other stories make this great saint, who is so close to our hearts, so human.